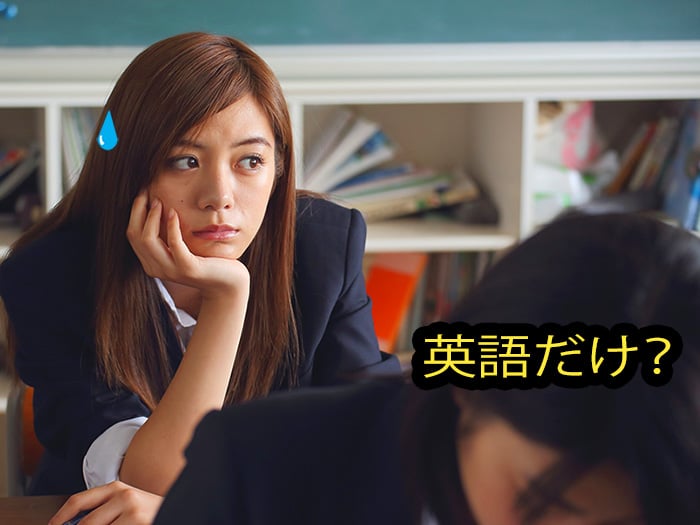 When you start teaching in Japan, depending on the environment you’ll either be told to speak only English all the time, or you might mix the two in your own class or with a Japanese teacher. Everyone has a different opinion on whether this is good for students, so I’m going to give you a few reasons why some schools prefer each approach, and you can make up your own mind which one you prefer.

At first they may struggle to understand what you are saying, but over time if you use a lot of gestures and body language they will become more confident communicators. This is especially true in classes with younger children like kindergarten and elementary school, where kids are still listening out for novel sounds and still becoming proficient in their native tongue.

It’s the way you learned language as a baby

You couldn’t possibly imagine a situation where a mother gives her infant a textbook with lists of verbs or grammar structures on it and says “study all of these for a test next Tuesday” right? Babies learn language from listening to people who they want to understand, because they love their parents and want to communicate with them.

Studies of feral children (those who are raised in isolation, often in the wild) have found that there is a critical period for language development, and if children haven’t learned a language by puberty then they will never be able to communicate fluently, only in short sentences or single words, and perhaps not at all.

In this way, using an All-English classroom mirrors how students would have learned their own native language as infants, and may actually be easier to learn the second language to fluency.

Getting qualified and highly proficient speakers of English from the native population to teach at schools in Japan is tough. So why require perfect language skills from Japanese natives when you can just hire native English speakers from overseas. That is why there are so many English teaching jobs in Japan: native English teaching in school has almost been completely outsourced to immigrants. This is great for us foreigners, as we can get a lot of jobs here, just take a look on the board if you don’t believe me.

First the obvious one: students can understand what is going on! If they don’t know what their teacher is saying, a large proportion of them may just give up trying to understand. This may be true in many junior high schools, which is where compulsory English education has begun until recently (now it will be from elementary grade 5). A lot of these students will be taught English for the first time ever, and easing them into this may help students to feel more confident as they learn something as difficult as a new language.

Classroom management becomes easier as you can use words students already know. I don’t know about you, but trying to get a class full of kids (especially young kids) to listen to something they don’t understand for a typical lesson period like 40 or 50 minutes is nigh on impossible. Not only are they too hyper to sit and listen, but if they don’t understand you there could actually be some risk to other students. “No no no don’t do that!” might not get the point across quickly enough to get little Keisuke to not drop a bookshelf on Haruto. A short, sharp “ダメ” or “やめろ” will get the kids to turn their heads, and can help you bring attention back.

It’s far easier to structure and administer tests and examinations

Probably one of the big ones here in Japan as they do love to test. Testing speaking skill is qualitative and very hard, but if students are just translating words or sentences it is easier to make a right answer and a wrong answer. Even teachers whose own English level is very low can at least check this or find help and examples from other teachers at their school or online.

Some Japanese teachers struggle to do a whole class in English

Japanese teacher’s are sometimes not particularly high-level speakers of English, so students won’t learn proper English from them and may pick up bad habits. I’ve mostly been lucky that the Japanese teachers at the schools I worked at could speak English reasonably well, but some of them were actually less fluent than their students. There was one teacher I worked with, Ms. Miyauchi, who couldn’t understand a lot of what I said, so I actually had a chance to practice my Japanese when planning lessons with her.

That’s it! Which one do you think is better, all-English or a little Japanese? How do you teach your classes? Tell us in the comments.