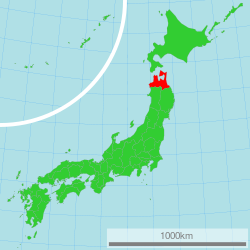 Known as the northern part of Mutsu Province prior to the Meiji restoration, Aomori is the northern-most prefecture on Japan’s main island of Honshu. Straddling both the Sea of Japan and the Pacific Ocean, the Tsugaru Straits flow past its upper edge. The population is 1.4 million with 290,000 of these people residing in the capital, Aomori City. The historical city of Hirosaki is the cultural capital of Aomori. Lying in the shadows of Mt. Iwaki (the Mt. Fuji of the north), this semi-rural city has preserved some elements of the area’s feudal past under the Tsugaru clan. The climate is humid temperate with hot summers, cold winters and significant snowfall. Ruins and artifacts from Jomon period people (2,000 to 10,000 years ago) have been found in Aomori and preserved for viewing at several places. Aomori is also known for Tsugaru-jamisen, which is a virtuosic style of playing the shamisen

An agricultural area known best as the largest source of apple production in Japan, seafood, rice, vegetables, timber and cattle are also major industries. In olden days, Aomori was famous for supplying horses to samurai and later to the Imperial Army. In post WWII times, however, horse production was mainly aimed at the racing industry and later for slaughter houses that supply “basashi” (raw horse meat), which has found a niche market in Japan as a delicacy. Aomori has only about 20 English conversation schools that hire native English speakers and about half as many other types of educational institutions that may employ foreign teachers. Then, there are some jobs available in the hospitality industry at onsens and ski resorts for foreigners with proper visas.

There are two prominent festivals of note in Aomori. The most famous one in early August is the Aomori Nebuta Festival (Aomori City), which is a tanabata-type festival of unknown origin with a parade comprised of dancers, drummers and a variety colossal illuminated floats that have been magnificently crafted and colorfully painted with mythological figures. There is also a Nebuta museum dedicated to this festival, Then, there is the Hachinohe Sansha Taisai Festival (Hachinohe City), which is a shinto-based event also with a parade and floats.