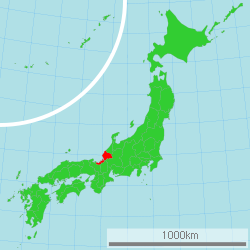 Formed from the provinces of Wakasa and Echizen at the time of the Meiji Restoration, Fukui is located in the Chubu region of Japan’s main Honshu Island facing the Sea of Japan. It has a population of 780,000 with 265,000 of those people residing in the capital, Fukui City. Fukui has a humid subtropical climate with hot, humid summers, cool winters and high rainfall throughout the year, which deposits significant snowfall in December and January, particularly in the mountain areas. The prefecture was voted number one among all Japanese prefectures for “living happiness” in a recent nationwide survey.

Fukui has an active manufacturing industry with eye wear (90 percent of Japan’s total output), textiles and Echizen-style traditional papermaking at the top of the list. Other industries include electronic products and devices, electrical machinery, and chemical products. Then, there are traditional agriculture, fishing and forestry activities. There are only about 20 English conversation schools that hire native English teachers with most of them located in capital city and about half as many other types of educational institutions that may employ foreign teachers.

As Fukui is one of the few places in Japan where dinosaur fossils have been found, the Fukui Prefectural Dinosaur Museum, where these finds are exhibited, is a popular attraction. Other things to see and do include the Ichijodani Asakura Family Historic Ruins (one of the most important cultural heritage sites in Japan), Eihei-ji (a serene Buddhist temple founded in 1244), Myotsu-ji (a National Treasure of Japan), Maruoka Castle (built in 1576, the oldest standing castle in Japan), Kitanosho Castle, Tojinbo (a scenic piece of coastline also a notorious spot for suicides), Yokokan Garden, Awara Onsen, Fukui Fine Arts Museum, etc.

Fukui is also renowned for its clean water and produce, which end up in its sake, rice, soba noodles and other dishes. The prefecture’s trademark dish is “sauce katsudon” (a fried crispy pork cutlet in sweet Japanese-style worcestershire sauce on rice). Other local foods include Echizen oroshi soba noodles (buckwheat noodles with with toppings and grated radish), a small guppy-like fish (genge) eaten as sashi and said to give the body a tingling sensation, cured sea urchin with rice and sake, echizen crabs (particularly popular during the winter crabbing season), Sato potato stew (a simple potato dish with Sato potatoes, soy sauce, sugar and mirin), Saba no heshiko (preserved mackerel that are salted, rolled in rice bran and lightly grilled). For desert there is Habutae (silk) mochi rice cakes, which are named after a silk fabric that had been produced in Fukui long ago.