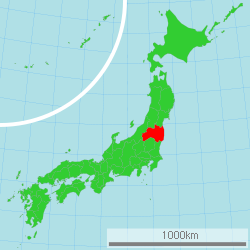 Known as Mutsu Province up until the Meiji Restoration, Fukushima is located on the east side of Honshu in the Tohoku region facing the Pacific Ocean. On account of its large production of fruit, it has been referred to as “the Fruit Kingdom.” It has a population of 1.9 million with 270,000 of those people residing in the capital, Fukushima City. Iwaki City and Koriyama City have larger populations of 360,000 and 326,000, respectively. Mountain ranges divide Fukushima into three areas, Aizu, Nakadori, and Hamadori. The climate varies from humid subtropical at lower elevations and humid continental at higher elevations with hot and humid summer and cold winters with some snowfall.

Fukushima is known worldwide for the 2011 disaster that occurred at the Fukushima Number 2 Nuclear Power Plant. The accident site is located in the mostly rural southeastern part of the prefecture with the main affected city being Tomioka City where 16,000 people had lived and 13,000 people still reside there. The capital, Fukushima City is about the same distance away from the site as Narita Airport. While there are some health concerns in the vicinity of the site, most of Fukushima Prefecture is considered safe.

Fukushima’s economy is a mix of industry, agriculture, fishing and tourism. Its production of manufactured goods is the highest in the Tohoku region, accounting for one-third of the total value. Medical devices, robots and renewable energy are particularly strong areas. Fishing is widespread at costal areas and inland areas produces rice, sake (over 60 breweries with many award-winning products) and fruits such as peaches, pears, peaches, cherries, grapes, apples, persimmons etc. Lacquerware from wood carvings is a traditional industry. Other traditional crafts include miharu koma (small, wooden, black or white toy horses painted with colorful designs) and kokeshi dolls (carved wooden dolls with large round heads and hand painted bodies).

There are about 60 English conversation schools that hire native English teachers and about half as many other types of educational institutions that may employ foreign teachers. Fukushima’s volcanic mountain ranges provide a well spring for countless natural onsens well as ski resorts. These make up a good size hospitality industry in the prefecture that will hire foreigners on proper visas.

The parental home and personal affects of Hideyo Noguchi (1876–1928) is located near Bandai-Asahi National Park. Noguchi is famous for his research on yellow fever as well as being on the 1,000 yen bill. Other places of interest are the Tohoku Safari Park in Fukushima City, Aquamarine Fukushima (waterfront aquarium), Abukuma-do (limestone cave and planetarium)

Fukushima has as a myriad of major festivals. The 1,000-year-old Nomaoi Festival in Soma, which is held in the summer. Horsemen in samurai attire reenact battles. The Uneme Festival in Koriyama held early August in honor of Princess Uneme features a large parade through the city with floats and a giant taiko-drum. At the Waraji Festival in Fukushima, which is held on the first weekend of August, local build a huge 12-meter straw sandal, and visitors from Taiwan perform a Taiwanese dragon dance. The Aizu Festival in Aizuwakamatsu, which is held in late September, features samurai sword dancing and fighting, and is followed by a parade of five hundred people in feudal costumes carrying flags. The Taimatsu Akashi Fire Festival, which is held on the second Saturday of November, features torch bearers accompanied by drummers ascending Mt. Gorozan to light a wooden frame symbolic of an old local castle.

Fukushima has its own brand of wagyu, which is called Fukushima-gyu. With a nearby horse auction, the town of Aizu Bange-Machi widely features sakura meat (horse meat) in many of its restaurants. This is said to be part of the local culture going back centuries from the time of the old Eigo Highway that ran through the town. Fukushima’s Kitakata Ramen is said to be one of the Top 3 Ramens in Japan. Thick, wavy noodles are placed in a shoyu-based soup made from boiling sardines, pig bones and vegetables with toppings of chashu (slices of roast pork), spring onions, fermented bamboo shoots and a pink and white swirl of cured fish cake (narutomaki). Ikaninjin is local dish of shredded carrots and dried squid seasoned with soy sauce, cooking sake and mirin, etc., and sauce katsu-don is popular in Aizu Wakamatsu City. This is a fried pork cutlet on rice that uses a special sauce rather than a whisked egg to coat the meat before breading. For desert there is mamador (literally “people who drink mothers’ milk in Spanish), which is a small cake of buttery dough filled with a milky sweat red bean paste of the milk taste.