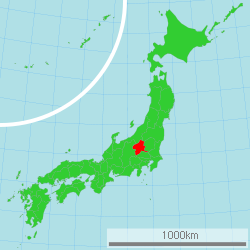 Formed from the southern part of Kenu Province at the time of the Meiji Restoration, Gunma is a landlocked, mostly mountainous prefecture in the Kanto area of central Honshu. It has a population of nearly 2 million with 340,000 of these people residing in the capital city of Maebashi. Takahashi City has a slightly larger population of 370,000. The climate is humid subtropical with cold winters, and less rainfall than neighboring prefectures with coastlines. Gunma has abundant beautiful scenery, high-quality water resources and few natural disasters.

Gunma is famous as the home of Japanese aviation pioneer Chikushi Nakajima and his Nakajima Aircraft Company, which produced all assortment of Japan's wartime aircraft. The most notable was the Nakajima B5N "Kate," which was the standard carrier-based torpedo bomber of the Imperial Japanese Navy. Much of this wartime aircraft production was done in the Gunma area including a myriad of suppliers. Unable to produce aircraft after the war, the company became Subaru and Fuji Heavy Industries, which are still headquartered in Gunma.

Gunma's modern industries include transportation equipment and electronic equipment, which are concentrated around Maebashi and the eastern region nearest Tokyo. There is extensive silk worm/silk, tofu production, and Gunma produces 90 percent of the konjac in Japan as well as a lot of cabbage production. There are about 70 English conversation schools that hire native English teachers and about half as many other types of educational institutions that may employ foreign teachers. Then there is also an extensive hospitality industry, e.g., ski resorts, onsens, etc. that will hire foreigners on proper visas.

In mid-June, the Onishi Summer Festival features floats from five areas are assembled and paraded around Fujikoka City to traditional ohayashi music and performances. In early August, the Takasaki Festival is the city's largest event with portable shrines and parades across the city center. The Maebashi Tanabata Festival is held in early July where large handmade decorations on bamboo are displayed. During the first weekend of August, the Kiryu Yagibushi Festival sees a small mountain town swell to 500,000 people with banging drums, twirling umbrellas, food stalls and performances of the Yagibushi Dance, which has been the traditional dance of Gunma since 1519. The Hitoboshi Fire Show at Ohinata in mid-August is a large fire festivals that features floating rings of fire to create mystical scenes in the darkness.

Gunma is Japan's leading producer of wheat, which features prominently in much of the local cuisine. Okkirikomi is mirin/shoyu-based soup with hand cut wide noodles that partially melt into the soup, taro/potatoes, and vegetables such as carrots, leeks, shiitake mushrooms, etc. Takasaki Pasta is a soup pasta served in large portions and topped with local produce, meat, etc. Himokawa Udon features thin noodles that can be as wide as 10 centimeters. Sauce katsu-don is a fried pork cutlet, but rather than using the normal method of dipping the meat in a whisked egg, it is coated with a special sauce before breading and frying. In an effort to promote Gunma's wagyu "Joshu beef, konyaku, leeks, mushrooms, hakusai cabbage, shungiku greens, etc. sukiyaki was declared as its "prefectural meal." For desert there are manju made with wheat flour fermented in sake, filled with sweet bean paste, basted in a sweet miso sauce, and grilled on skewers to a golden brown color.