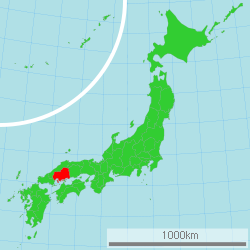 Known as Aki and Bingo Provinces prior to the Meiji Restoration, Hiroshima lies roughly in the middle of Japan facing the Seto Inland Sea. It has a population of nearly three million people with 1.2 million of these people residing in the capital, Hiroshima City. While famous for being the place an atomic bomb was first used as a weapon on people, traditionally Hiroshima has been the center of Japan's Chugoku region. It's geography provides a mild climate, and the people there speak Hiroshima dialect, which is said to be a blunt and to-the-point way of speaking sometimes associated with the way Japanese gangsters speak.

Manufacturing has continued to grow in Hiroshima center around Mazda, and at present its production is the 10th largest in Japan. In addition to automobiles, there are industrial clusters in the areas steel, electronics, precision machinery and chemicals. This is balanced out with tourism, and much agriculture and fishing. As one of Japan's major regional cities, there well over 100 English conversation schools that hire native English speakers and about half as many other types of educational institutions that may employee foreign teachers.

It goes without saying that the Peace Park, a memorial to the victims of the atomic bomb blast is the most visited place in Hiroshima. This hallowed ground is a moving experience that is home to ground zero, mass graves, blast ruins, and a museum all encompassed in a large park area. There are of course many other things to see and experience in Hiroshima, including Hiroshima Castle, Miyajima, Itsukushima Shrine and Torii Gate (Hatsukaichi), Shukkei-en, Kamiyacho, Hatchobori and Namiki Dori shopping areas, Miyajima Public Aquarium, Onomichi City Museum of Art, Taishaku Valley (Shobara), etc.

Hiroshima Okonomiyaki has become famous throughout Japan. What started as local soul food and a cheap snack after WWII using much flour, which was widely available and fewer vegetables which were not as easily available, this is basically okonomiyaki but with a layer of noodles underneath. It is taller than ordinary okonomiyaki and today has much more cabbage. Fresh oysters (kaki ryori) and other seafood from the bountiful Seto Inland Sea are also popular and widely available. Grilled conger eel (anago) on rice, octopus cuisine, and even shark meat are popular in Hiroshima.