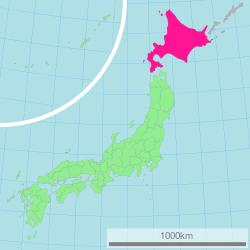 Known as Ezochi, literally the "Land of Ezo," up until the Meiji Restoration, Hokkaido is one of Japan's four main islands and is its northern most prefecture. It has a population of 5.4 million with nearly 2 million of those people residing in the capital, Sapporo City (Japan's 5th largest city). Hokkaido is mountainous in central areas with several active volcanoes while wide plains are scattered around its coastal areas. The climate is mostly humid continental climate with cool summers and cold, snowy winters. Due to its latent development and abundant space, its cities tend to follow Western-style grid patterns with more space as opposed to traditional somewhat tight urban circles that had developed around castles or government centers in most of the rest of Japan.

Possessing a quarter of Japan's arable land, agriculture makes up a large part of Hokkaido's economy, and it ranks number one in the nation in production of wheat, soybeans, potatoes, sugar beets, onions, pumpkins, corn, milk and beef. Hokkaido also leads Japan in output of marine products, and with nearly a quarter of the nation's forests it has a significant timber industry. In the past industry has tended to be light such as packaging food products, beer production, pulp and paper products, etc. as well as mineral extraction such as coal, iron and steel while later industry has included transportation equipment (automotive), electronic components, etc. and most recent industrial development includes biotechnology and data centers. Tourism is huge in Hokkaido with countless ski resorts, onsens and other resorts that attract tourists from hot and humid summers to Hokkaido's cool summers. Such places are a regular source of jobs for foreigners with proper visas, and there are about 150 English conversation schools that hire native English teachers with most of them located in capital city and about half as many other types of educational institutions that may employ foreign teachers.

In Hokkaido snow festivals reign supreme, and the biggest one is the Sapporo Snow Festival, which is held over seven days in early February at Odori Park, Susukino, and Tsudome. Over two million visitors come to observe about 400 massive snow sculptures that are created by various teams as a contest, and many other festival activities are held during this time. Other cities hold smaller events on a smaller scale such as the Asahikawa Ice Festival in early February and the Sounkyo Ice Festival in mid-February. In June, 1.8 million people visit the Yosakoi Soran Festival in Odori Park, which features about 350 teams with 45,000 members in costumes dancing to the traditional song "Soran Bushi." The Sapporo Summer Festival is held over a month from mid-July to mid-August with people enjoying outdoor dining and drinking in beer gardens in Odori Park and on the streets of Susukino. It includes smaller events such as the Tanuki Festival and the Susukino Festival. The Sapporo Autum Festival is held in September, and there are Sapporo White Illuminations from November through January with a Christmas Market in Odori Park. Meanwhile, Hakodate holds the Hakodate Port Festival in August when a mass of local residents gather in the streets to perform a wiggly dance known as the Ika-Odori (Squid Dance).

Ramen has been immensely popular in Hokkaido with individual cities tending to have their own unique varieties. Miso ramen is said to have originated in Sapporo where there were a myriad of such restaurants. It is made with a miso flavored pork bone broth, pork lard and thick wavy noodles. Later Sanyo Foods launched a brand of instant ramen called "Sapporo Ichiban." Hakodate has a "shio (salt) ramen" with a pale, clear, salty broth made of chicken or pork bone with vegetables, fish, and seaweed as toppings. Meanwhile, The broth of Asahikawa Ramen has an oily shoyu-based broth with thing wavy noodles and a wide variety of toppings such as green onions, pork, bamboo shoots, eggs, etc.

Other local dishes prominently feature the region's plentiful fresh sea food, which includes salmon and its roe, sea urchin, crab, tuna and squid. Hakodate City's even made squid its official fish and has dish called the "dancing squid" where soy sauce is poured on recently deceased squid with the sodium causing cadaveric spasms on the plate. There is uni-ikura-don (sea urchin and salmon roe on a bowl of rice), kaisen-don (many kinds of seafood, e.g., crab, shrimp, uni, ikura, salmon, tuna, etc., on a bowl of rice) ishikari nabe (salmon and vegetable stew with tofu, konjac, miso and butter), chan chan yaki (salmon and vegetables hotpot with a miso-based sauce), Tako-Sahbu (hot pot with meat, vegetables and dipping sauce like shabu shabu but octopus is substituted for beef.

With sheep farming common during the Taisho Period (1912-1926), lamb meat cuisine flourished, and this yakiniku-type dish came to be called Genghis Khan BBQ, even being cooked on Mongolian-helmet-shaped skillets. Soup curry, which is made with chicken or pork and large chunks of vegetables is very common in Sapporo

For desert there are Sapporo Sweets, which are confectioneries made of local Hokkaido ingredients, and white chocolate biscuits are called "shiroi koibito" or "white lover." Then, haskap is a local variety of edible honeysuckle, similar to blueberries.