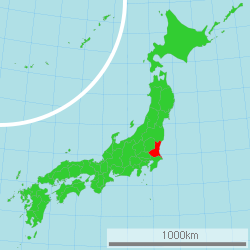 Known as Hitach Province up until the Meiji Restoration Ibaraki is one of the four prefectures that surround the main Tokyo metropolitan area and as such its western half serves a suburb of Tokyo with a large number people commuting into Tokyo, particularly on the Joban train line that ends at Ueno. Most of the northern and eastern parts are rural agriculture areas with lengthy eastern border facing the Pacific Ocean. The population is 2.9 with only 270,000 of these people residing in the capital, Mito City, which is located in the eastern rural area, but still the prefecture's largest city.  Ibaraki has a mostly humid subtropical climate with hot summers, cool winters and rainfall throughout the year, but both summers and winters are cooler and colder than Tokyo, particularly on the eastern side near the mountains.

Locals refer to Ibaraki as Ibaragi, which has caused some confusion with Ibaragi City in Osaka, but the central government folks insist that it should be Ibaraki. The local dialect, Ibaragi-ben, resembles nearby Tohoku dialects and is extremely easy to learn in two steps. First "dappe" is used as the ending for most sentences, e.g., desu, desu ne, desho, etc. It's a kind of one word fits most situations. Second, most verbs are ended with a "be," e.g., ikube, taberube, nomube, etc. (go, eat, drink, etc.). With those two steps it is easy to understand and speak Ibaragi-ben, but most Ibaraki people in Tokyo are embarrassed by this as they find their dialect crude, bumpkin-like, etc. and not something they are generally proud of.

Ibaraki is a mostly rural prefecture with some industry centered around Hitachi, where the electronics company of the same name has a huge presence including manufacturing facilities, and the newly built science city of Tsukuba, which is somewhat of an artificial city with the area designated for development in the 1960s. The University of Tsukuba (originally Tokyo University of Education) was newly built along with nearly 50 public laboratories for basic scientific research. All the building at Tsukuba "Science City" culminated in the science and technology Expo '85, which was a World's Fair. There are several small ports which mainly service the fishing industry as well as modest amounts of tourism along the coast and in the capital city. In addition to significant rice production, Ibaraki produces about 25 percent of Japan's bell peppers and Chinese cabbage. Significant amounts of natto (fermented soybeans), watermelons and chestnuts are also produced. Then, there are about 100 English conversation schools that hire native English teachers with most of them located in cities along the Joban line closer to Tokyo and about half as many other types of educational institutions that may employ foreign teachers.

Kairakuen in Mito is one of Japan's three most celebrated gardens and famous for over 3,000 Japanese plum trees in more than 100 varieties. The cities of Mito Kasama and Yuki have castle ruins while Kasama is know for Shinto art, culture and pottery. Other things to see and do in Ibaraki include the Fukuroda Falls in Daigo, the Tsukimachi Waterfall in Kuji, Aqua World aquarium park in Oarai, the Hitachi City Kamine Zoo, Suigo Itako Iris Garden, Hitachi Seaside Park, Mito Municipal Botanical Park, the Ushiku Buddha, Tokiwa Shrine in Mito, Kashima Shrine, Oiwa Shrine, Torii of Oarai Coast, Mt. Tsukuba, Mt. Hokyo, Lake Kasumigaura (the second largest lake in Japan), etc. Major museums include the Ibaraki Museum of Modern Art in Mito, the Ibaraki Prefectural Museum of History in Mito, the Tokugawa Art Museum in Mito, the Museum Park Ibarakiken Natural Museum, the Tsukuba Science Museum.

Some of the major festivals in Ibaraki are the Mito Komon Festival (celebrating the city's patron daimyo Mitsukuni Tokugawa, who has been widely popularized in modern TV dramas), Tsukumai (a Yasaka Shrine Gion Festival) in Ryugasaki City at the end of July with men climbing tall poles and performing acrobatic feats like headstands and tightrope walking, the Kashima Shrine Saito Festival on March 9 (musicians in colorful costumes parade around the city playing music for good health and a good harvest), Hitachi Otsu Ofune Festival (a boat festival held once every five years to pray for safety on the seas and good catches), etc.

When it comes to food, Ibaraki is best known for natto, both its production and consumption. It is staple breakfast for locals as well as eaten at other meals. There are a variety of methods for serving it but the main way is with shoyu, mustard and thingly chopped long green onions mixed in and then the mix put on top of rice. Ramen is very popular in Mito City, and the local variety is called "stamina ramen," which has a shoyu-based broth with thick noodles and a sweet and hot spice sauce with quick-fried liver, pumpkin, cabbage, etc. on top. Other dishes include anko (monk fish/angler fish) stews and soups, which include various parts of this superugly fish, namely its liver), roasted pork burgers in Mito, shishi-nabe (a hot pot dish with wild boar meat and seasonable vegetables), lotus root foods, miso peanuts, etc.