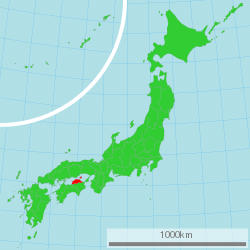 Known as Sanuki province before the Meiji restoration, Kagawa is a small prefecture located on the northeast side of Shikoku mostly facing the Seto Inland Sea. It has humid subtropical climate and a population just under 1 million with nearly half of these people living in the capital at Takamatsu City.

Kagawa has traditionally been a gate way from Honshu to Shikoku. Since 1988, commerce was greatly enhanced with the prefecture's connection to the main island's Kinki region by means of the Great Seto Brige, which is 13.1 kilometers long and the world's longest two-level bridge (road and rail traffic). In addition to fishing and agriculture, Kagawa's economy includes production of chemicals, nonferrous metals, petroleum and coal products and transport machinery. There are about 50 English conversation schools that hire native English teachers with most of them located in capital city and about half as many other types of educational institutions that may employ foreign teachers.

Two of the more famous places to see in Kagawa are the Ritsurin Garden in Takamatsu, an Edo period feudal lord garden, and Kotohira-gu shrine on Mt. Konpira, which is assocaiated with a sea faring god dating back to the first century. Takamatsu Castle, which has been recently restored, uses seawater in its moat. The areas regional history and culture are on display at Shikoku Mura. Then there is an abundance of natural scenic places to visit in Kagawa, including the Yashima lava plateau and Manno Lake as well as easy access to multiple islands on the inland sea with an assortment of natural wonders to view.

The Sanuki Takamatsu Festival is one of Shikoku's four main matsuri. This is a yosakoi dance festival together with the largest fireworks show in Shikoku. Other events include the Kagawa Water Rice-Seeding Festival and the Awai hydrangea Festival, both held in June. The Setouchi Triennale is a contemporary art festival with outdoor exhibitions from artists around the world.

On the culinary side, Kagawa is best known for its sanuki udon, which has become one of the most popular types of udon in Japan. This is basically udon noodles served al dente with dashi (katsuo broth) and kelp. There is also a shippoku udon, which has a lot of vegetables. There are more than 700 udon restaurants in Kagawa, which are very popular among visitors. Kagawa is also famous for "hone-tsuki-dori" (seasoned chicken thigh cooked on the bone), which has also become popular nationwide. Olive oil production in Kagawa has resulted in waste bi-products used as feed for beef and yellowtail, which is said to result in less oxidation of these meats due to the polyphenols in olive oil. Finally, iriko meshi is sardines put on top of rice and cooked.