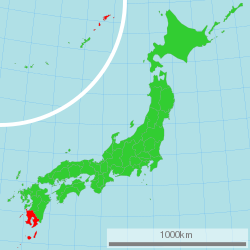 Forming the southern tip of the Kyushu, Kagoshima is the southern-most prefecture on the Japanese mainland. Formerly known as Satsuma Domain run by the Shimazu Clan for millenia up until the Meiji Restoration, Kagoshima has a population of 1.6 million with more than one-third of these people residing in its capital, Kagoshima City. Ominously nicknamed "Naples of the East," Kagoshima City lies across the bay from the active stratovolcano, Sakurajima, which is frequently releasing smoky clouds from its caldera. Apparently at a safe enough distance away, the main issue for locals seems to be thin layers of volcanic ash on cars and homes depending on how frequently Sakurajima decides to burb. Daily ash forecasts and subsequent measures are a part of local life.

In olden days Satsuma, which was an ideal trading nexus with China and the Ryukyu islands, was a very prosperous domain, and the people still speak a distinct Kagoshima dialect that differs from other parts of Kyushu. The area is considered to be the birthplace of the Meiji Restoration in 1868, and the movie, The Last Samurai was loosely based on events from the Satsuma Rebellion in 1877. With its samurai being involved in repeated fights over the preceding decades, the area would later be known as a source of good soldiers for the newly formed Imperial Japanese Army.

Today Kagoshima is one of the major food supply depots in Japan with many food-related companies located there. There is also a concentration of semiconductor and automotive industries with some foreign capital companies as well. Kagoshima has about 50 English conversation schools that hire native English speakers and about half as many other types of educational institutions that may employe foreign teachers.

The Fukiage Sand Festival is held annually in May at the Fukuage beach and features sand sculptures of all sizes from small to enormous. There is an Umbrella Burning Festival (sogadon-no-kasayaki) on the fourth Saturday in July, which honors the filial piety of the Soga brothers in Shizuoka 800 years before. A tower of wo hundred umbrellas is set on fire. Then, the Ogionsaa and Rokugatsudo Festivals also held in July while the Kagoshima Ohara Festival is held in November. Other events include Kumo Gassen, a spider fighting contest held in Kajiki in June, the Sendai City Great Tug-of-War in September with about 1,500 participants on each side, the Kinko Bay Summer Night Fireworks Show in July

Kagoshima's warm climate, abundant water and proximity to the sea have produced a distinct culinary culture that has gained nationwide popularity. Top on this list may be the simple Satsuma imo or unique style of Japanese sweet potato that has been sold for millennia via street carts with open hearths covered in rocks on which the potatoes are cooked. These venders are now heard all over Japan slowly move around urban areas chanting, "Yaki imo" or grilled sweet potatoes. Then, Satsuma age (deep-fried fish cake), which is said to have originated from the Ryuku Kingdom, are ubiquitous throughout Kagoshima in great variety. Kagoshima ramen, which is made with pork bone broth and served served with pickled daikon, is cloudier than other ramens with thicker noodles, and it generally includes vegetables, dried sardines, kelp and dried mushrooms. Other popular cuisine incorporating local agriculture include kibinago sashimi (silver-striped herring), buri Amberjack, kampachi yellowtail, "Black Label Products" such as kuro-ushi Wagyu beef, kuro-buta Berkshire pork dishes, and kuro-Satsuma jidori chicken (sometimes served as raw, chicken sashimi); smoked eel, keihan, and miki (fermented rice milk).

Satsuma is officially recognized as the birthplace of the traditional Japanese spirit, shochu (a vodka-like potato/grain spirit), and present day Kagoshima has more than 100 distilleries producing more than 1,500 different brands of schochu. Sweet potatos and locally grown sugar cane are included in some of the mash bills.