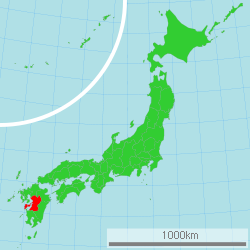 Lying roughly in the middle of Kyushu, Kumamoto is a mostly rural prefecture that is bordered by the Ariake inland sea on the west and Japan's largest active volcano, Mt. Aso, on the right. Its population is about 1.8 million, and the capital city is Kumamoto City where about 40 percent of those people live. This area, which had an active Christian community up until persecution in the early 1600s, changed its name from Higo province to Kumamoto (origin of bears) at the time of the Meiji Restoration. Today Kumamoto retains one of the best known castles in Japan, Kumamoto-jo, a large strongly fortified structure, as well as one of Japan's most visited active volcanoes.

Kumamoto is renowned for its abundant sources of clean natural ground water (something to do with volcanic surroundings). This has led to an assortment of food and livestock products that are valued throughout Japan. Agriculture, forestry and coastal fishing are a given for a rural prefecture on an inland sea, but Kumamoto has also been a regional industrial center since well before the war. In the 1950s and 1960s (after fraudulent corrective measures in the previous decade) this culminated in one of Japan's worst ever industrial pollution poisonings with Minamata disease, which was caused from Chisso Corporation releasing methylmercury into Minamata Bay from 1932 to 1968. The mercury accumulated in shellfish and fish and made thousands of local residents and animals who ate the fish sick. Today, Minamata has mostly recovered and serves as a model eco-town for environmentally friendly lifestyles. Over this same period, other industries have continued to thrive with the semiconductor and automobile industries in particular forming clusters referred to at the present time as “Silicon Island” and “Car Island. Meanwhile, there are about 50 English conversation schools in Kumamoto that hire native English speakers and about half as many other types of educational institutions that may hire foreign instructors.

Things to see in Kuamamoto: Mount Aso, one of the world's largest active volcanoes, may be the prefecture's top tourist attraction. Approaching observation areas at the crater edge, the smell and site of yellow sulfur is unmistakable, and the nearby concrete shelters make visitors wonder if it is a good idea to visit, but occasional minor eruptions every four or five years seem to be predictable and well managed by park officials. Kumamoto-jo is a large well fortified castle that in the past has had a real old-style feel to it. Visitors had to climb up large rectangularly hewn rocks to access some parts, but a series of renovations including some in recent years may be changing that. Major renovations have accelerated after extensive damage from the 2016 earthquake. Suizenji Park was built in 1636 as a tea retreat for the local lord at the time. It then served for about 300 years as a retreat for local rulers. Today it is one of Japan's most famous gardens with breath-taking scenes of bygone days in Japan. The 84-meter Tsjun Bridge in Yamato, which was built in 1854, is the largest stone aqueduct in Japan. In the Kikuchi Valley, a river has carved beautiful gorges through some woodlands.

Some local festivals include: the Aso Fire Festival in March when the slopes of Mt. Aso are alight with flames, including lighting of a giant Chinese character for fire; the Yamaga Toro Roman Festival in Yamaga, which is one of Kumamoto's most picturesque events, where women dance with lanterns on their heads; and the Ryubikudari Festival held on June 12 to honor the Koen Buddhist Saint of the Renge-in Tanjo Temple, becoming an incarnation of the Dragon God, with a five-story pagoda lit up with a thousand lanterns made to look like heaven.

Then, some local cuisine includes: Kumamoto ramen, which includes roasted garlic toppings to a mild broth from pork and chicken bones; taipiien, coming from China and similar to Fujian wonton soup; dagojiru, which are flat dumplings in a soy sauce and miso broth served with daikon, carrots, and other vegetables; karashi renkon, which is boiled lotus root stuffed with spicy mustard and miso, fried in yellow batter and hitomoji no guruguru, which is a boiled green onion that is tied into a knot after it is boiled, and is served with spicy mustard and miso sauce; Red wagyu beef (characterized by a healthier balance of meat to fat ratio), Kumamoto SPF Pigs (gentian pork) which are fed seaweed powder and brought up under highly sanitary conditions; Kumamoto's produce (watermelon, melons, tomatoes, and many other vegetables); ikinari dango, which are sweet dumplings made with sweet potatoes wedges covered with sweet red bean paste, and then wrapping them with steamed flour; Korean Candy, which is a kneaded sticky rice, syrup and sugar being made the Higo Clan 400 years ago after receiving the secret recipe from Korea.