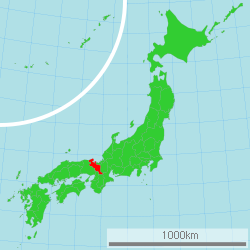 Known as Yamashiro, Tango and Tanba Provinces up until the time of the Meiji Restoration, Kyoto is located south central Honshu with its capital and most of its population in the landlocked eastern part while the northwestern part has a shoreline on the Sea of Japan. Kyoto has been the imperial capital of Japan throughout most of its recorded history. The only exceptions were when the imperial capital moved to Nara briefly from 710 to 794 and then to Tokyo during the Meiji Restoration. Having a wealth of historical and cultural sites, Kyoto was spared bombing during WWII, and today it is the most popular tourist area in Japan. Kyoto has a population of 2.6 million with nearly 1.5 million of these people residing in the capital, Kyoto City. The climate is mostly humid subtropical with marked seasonal variations in temperature and precipitation. Summers are hot and humid while winters are relatively cold with occasional light snowfall.

While production of traditional arts and crafts, e.g., Nisijin brocades, Yuzen silk dyeing, pottery, dolls, etc. is active in Kyoto, the area is also home to advanced world-class high-tech companies like Kyocera, Murata Manufacturing, Nintendo, Nidec, Mitsubishi Logisnext, Maxell, Kyoto Animation, etc. Meanwhile, there is substantial fishing in northern Kyoto on the Tango Peninsula, and agriculture and forestry in the middle areas. Kyoto produces nearly 15 percent of the sake and green tea in Japan. Tourism is a also large part of the economy, particularly in Kyoto City where there are many hotels, restaurants, shops, etc. that cater to both foreign and domestic tourists. Then, there are about 75 English conversation schools that hire native English teachers with most of them located in capital city and about half as many other types of educational institutions that may employ foreign teachers.

Things to see and do in Kyoto are too numerous to list, but the majority of these center around historical and religious sites in or near the capital. In Kyoto City alone there are 1,600 Buddhist temples and 400 Shinto shrines as well as palaces, gardens and well preserved historical architecture. Some of the main tourist attractions are Kiyomizu-dera (a magnificent wooden temple supported by pillars off the slope of a mountain), Kinkaku-ji (the Temple of the Golden Pavilion), Ginkaku-ji (the Temple of the Silver Pavilion), Ryōan-ji (Temple of the Dragon at Peace) famous for its rock garden, and the Heian Jingu (a Shinto shrine, built in 1895, celebrating the Imperial family and commemorating the first and last emperors to reside in Kyoto).

Other sites in Kyoto include Kyoto Tower, the Kyoto Aquarium, the Heian Shrine Arashiyama, the Gion and Pontocho geisha quarters, the Philosopher's Walk, and canals lining some of the older streets, and outside the capital there is the Togetsu Bridge, bamboo forest and monkey park in Arashiyama, Amanohashidate (with scenic views and beaches).

There are nearly 50 museums in Kyoto City alone with just a few of the major ones being the Kyoto National Museum, Kyoto Municipal Museum of Art, Kyoto Museum of Traditional Crafts, Ryozen Museum of History and the JR Museum.

Every temple and shrine holds some kind of festival but the main ones are the Aoi Festival on May 15 (held since 544), the Gion Festival during the entire month of July, which is one of the most famous in Japan culminates in a parades on July 17 and July 24 (held since 869), the Ine Festival (held since the Edo-era), the Daimonji Gozan Okuribi, which is the lighting of bonfires on a mountain in the shape of the kanji for “big” on August 16 after the obon festivities (held since 1662), and the Jidai Festival on October 22, which features a historical enactment parade (held since 1895).

Kyoto is well known for its delicious Japanese food and traditional cuisine. With many temples nearby a variety of unique vegetables have been developed in the area, which are referred to as kyo-yasai. Kaiseki ryori (a traditional multi-course Japanese dinner) is said to have originated in area temples but developed into haute cuisine of today through being served to the imperial court over long periods of time. Other specialties in Kyoto are ayu (river sweet fish usually salted and grilled on a skewer), pickled mackerel, yellowtail shabu shabu, Taiza crab from the port city of Kyotango City, Maizuru niku jaga (from Maizuru City where this simple but popular sweet shoyu flavored beef, potato and onion dish is said to have originated), obanzai (sea vegetables, eggplants, herring, codfish, salted mackerel, tofu, and boiled daikon), etc.