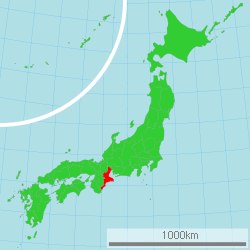 Mie is a mostly rural prefecture that forms the western edge of the Kii Peninsula in southern Honshu. There are traces of human habitation dating back 10,000 years, and the prefecture is home to Japan's holiest place, the Ise Shrine. Prior to the Meiji Restoration Mie was comprised of Ise, Shima and Iga Provinces, and part of Kii Province. With much of its border facing the Pacific Ocean, Mie has a humid subtropical climate with cold winters, hot summers, significant rainfall. The population is 1.8 million with 280,000 of these people residing in the capital, Tsu City and 306,000 residing in the largest city, Yokkaichi. While closer to Aichi (Nagoya), Mie has had more cultural influence from the Kansai region including the Kansai dialect being spoken there.

Mie has a balance of industry (mostly in northern Mie), tourism and traditional local economy of agriculture, fishing and forestry. Manufacturing consists mainly of transport vehicles (vehicles and ships), and heavy chemicals such as oil refineries, and there are also advanced modern industries such as semiconductors, liquid crystal displays, medical, health and welfare, etc. As a nexus on the traditional Tokaido and Ise pilgrimage roads, the area continues to produce handicrafts such as Iga braids, Yokkaichi Banko pottery, Suzuka ink, Iga pottery and Ise katagami. Mie also produces sea food products, tea, beef, cultured pearls, fruit (mainly mandarin oranges) and forestry products. There are about 60 English conversation schools that hire native English teachers and about half as many other types of educational institutions that may employ foreign teachers.

From 1960 to 1972, concentrations of petrochemical and chemical plants in the Yokkaichi area resulted in one of Japan's Four Big Pollution Diseases, referred to as Yokkaichi Asthma. Ostensibly this pollution has stopped and the area is cleaner than it was 50 years ago. The burning of oil released large quantities of sulfur oxide that caused severe smog, but the situation was mostly rectified by adding a flue-gas desulfurization process.

Tourists are attracted to Mie to visit the holiest place in Japan, Ise Grand Shrine, which is dedicated to the Sun Goddess, Amaterasu, and Japan's oldest shrine, Tsubaki Grand Shrine, which claims origins back to the year 3 BC. There are numerous other shrines, temples and historical sites as well as beautiful national parks. Other places to visit include Nagashima Spa Land (one of the largest amusement parks in the world), Suzuka International Racing Course (Japan's largest race track), Sakakibara Onsen (the third best onsen in Japan) Yunoyama Onsen (atop Mt. Gozaisho), Mikimoto Pearl Island (where cultured pearls originated), The Wedded Rocks of Okitama Shrine in Futami, and Iga-Ueno (the birthplace of the ninja and home to the Iga Ninja Museum).

There are many historic festivals in Mie. The Ishidori Festival held on the first Sunday of Augsut in Kuwana City is said to be the noisiest with the banging of drums and gongs. floats decorated with dolls parade through the town. The 300-year-old summer Great Kumano Fireworks Display in mid-July is famous for both its scale and uniqueness of fireworks. The area's pearl history and culture is celebrated with the Shirongo Festival, which features female ama sea divers in white garments and other marine activities. Other major festivals include the Shirongo Festival in mid-July, which celebrate fish catching, and a Tojin Odori Festival, which commemorates the arrival of the Joseon Tongsinsa delegation from Korea during the feudal period, is held in the capital and in Suzuka City.

With a lengthy coastline and active fishing industry Mie cuisine features a lot of sea food, the most famous of which may be the Ise ebi or spiny lobster. In contrast to Maine lobsters, these creatures have no claws to eat but can reach large sizes and are said to have a sweet umami flavor. On land the Kumano area has bred a unique "Kumano chicken," which is said to have ideal taste qualities, and Matsusaka beef, which is one of the three major types of Japanese beef, is produced. This is high fat content meat from female black-haired cows that have been fed wheat and beer, and receive regular massages. Ise Udon is made by boiling the noodles longer than usual and serving with a thick soy/sake-based soup topped with green onions. For desert there is Akafuku, which is a made from a 300-year-old recipe with mochi and sweet red bean paste.