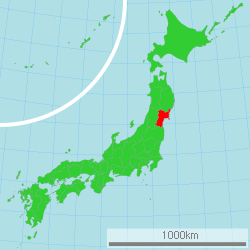 Known as a part of Mutsu Province up until the time of the Meiji Restoration, Miyagi is located on the east side of Honshu in the Tohoku region facing the Pacific Ocean. It has a population of 2.3 million with nearly half of these people residing in Sendai, which is one of Japan’s major regional cities. It has a mostly humid subtropical climate with warm, wet summers, cold, dry winters, and occasional snowfall.

Particularly around Sendai, the Miyagi economy is dominated by manufacturing with leading products being electronics, semiconductors, appliances, automobile batteries and other parts, food processing. Outside the capital there is significant agriculture and fishing, particularly with large production of rice, oysters and sauries. Traditional crafts include Sendai hira (hand woven silk fabric), Tsutsumiyaki pottery, Yanagiu Washi paper, umoregi zaiku (crafts created from fossil wood) kokeshi dolls, Tsuishu and Tamamushinuri lacquerware. There are about 60 English conversation schools that hire native English teachers with most of them located in capital city and about half as many other types of educational institutions that may employ foreign teachers.

Major museums include the Sendai City Museum (artifacts related to the Date family and the history of Sendai), the Miyagi Museum of Art (Sendai's largest art museum), the Tomizawa Site Museum (preserves a fossilized forest where the remains of human habitation from 20,000 years ago can be seen), the Sendai City War Reconstruction Memorial Hall (dedicated to remembering the air raid of July 1945 in which most of Sendai was destroyed, 3M Sendai City Science Museum, the Sendai Literature Museum, Tohoku University's Museum of Natural History, the Ishinomori Manga Museum, and the Sendai Anpanman Children's Museum & Mall

The most famous festival in Miyagi is the Sendai Tanabata Festival which is held from August 6–8. It is the largest Tanabata Festival in Japan attracting more than 2 million visitors. Meanwhile the Dontosai Festival is the oldest festival in Miyagi Prefecture. Here men march to the Osaki Hachiman Shrine dressed only in loincloths, and worshippers bring their New Year's decorations to be burned in a large bonfire and pray for good health, good fortune and the well-being of their families. Other festivals include the Aoba Festival in May, which features traditional mikoshi, floats, a samurai parade, and traditional suzume dancing, the Shiogama Port Festival in July (one of Japan's three major boat festivals), the Narugo Kokeshi Festival in September (Kokeshi dolls are burned ceremonially), and the Sendai Pageant of Starlight in December (Jozenji Dori is brilliantly illuminated with 600,000 lights).

Miyagi is said to be the origin of several foods, including grilled or fried beef tongue (gyutan), hiyashi chuka (cold Chinese noodles), and robatayaki (fireside cooking or grilling meats and vegetables on a charcoal grill in front of you). Zundamochi (mochi balls covered with a sweet, green edamame paste), and sasakamaboko (kamaboko shaped like bamboo leaves) are also considered to be Sendai specialties. In the fall many Imonikai (potato stew parties) are popular along river banks. The local ramen specialty is a spicy miso ramen. Other local foods include Sendai zuke-don (white fish marinated in special sauce on rice) or kaki-don (oysters marinated in special sauce on rice). In Kesennuma shark fin is served in a variety of ways, raw, boiled, full fin or in shark fin soup.