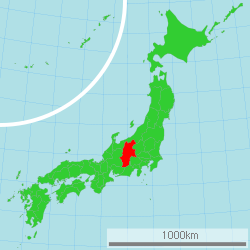 Known as Shinano Province before the Meiji Restoration, Nagano is a landlocked mountainous prefecture in the Chubu region of central Honshu. Surrounded by eight other prefectures, Nagano is home to the Japan’s Northern and Southern Alps, which average 3,000 meters in height. Winters are cold and summers are cool, which makes the area a very popular destination or second home location for Tokyoites during hot and humid summer periods. The population is over 2.1 million with only 375,000 of those people residing in the capital, Nagano City.

Cools summers and skiing in the winter results in a huge influx of tourists to Nagano each year and accompanying large hospitality industry. There is also a large and diversified economy that includes production facilities for several major Japanese companies. Leading products include electronics, precision machinery, transportation equipment, fundamental manufacturing technologies, information technology, agriculture and food products. In addition to an extensive hospitality industry, namely ski resorts and onsens, that will employe foreigners on proper visas, there are about 100 English conversation schools that hire native English teachers and about half as many other types of educational institutions that may employ foreign teachers.

Things to see and do in Nagano include Matsumoto Castle, (a National Treasure of Japan), Matsushiro Castle, Suwa Taisha (one of the oldest shrines in Japan), a 50-meter geyser in Suwa, Zenko-ji temple in Nagano City (1,400 years old), the Omuro kofun (burial mounds) group, Asama Onsen, Lake Kizaki, Lake Suwa, Mount Kirigamine, etc. Some major museums include the The Nagano City Museum, the Nagano Prefectural Shinano Art Museum, the Mizuno Museum of Art, and the Kitano Museum of Art, and the Matsumoto City Museum of Art. Amidst abundant natural scenic beauty, there are many hiking and cycling trails, and camping grounds.

Major festivals include the Nagano Lantern Festival in February (commemorating the 1998 Winter Olympic Games), the Dondo-Yaki Bonfire Night in early January (marking the end of the New Year’s period), the Nozawa Fire Festival on January 15 (one of Japan’s top three fire festivals), the Iiyama Snow Festival on the second Saturday and Sunday of February (with a myriad of snow sculptures), the Saku Balloon Festival in early May (hot air balloonists gather from all over Japan)m the Sakaki Festival in mid-August (local youth running down from the mountain to the Kakuma riverbed with torches in hand to be thrown into the river), Suwa Lake Fireworks Festival in mid-August (one of the largest displays in Japan with 40,000 fireworks set off), the Ogress (Kijio) Momoji Festival held in mid-October, the Yoi Ebisu and Ebisuko Fireworks display in late November, etc.

Rice has never grown well in Nagano's highland climate. In its place buckwheat (soba) has become the staple grain and makes ups a significant part of the local diet. Soba is served for breakfast, and many shops still make their own noodles by hand, which makes them more chewy, slippery and aromatic. Shinshuu soba (one part wheat, four parts buckwheat) is a local specialty, or try Toji soba where noodles are reheated using a bamboo strainer in a broth seasoned with local vegetables. Oyaki is a dumpling made from fermented buckwheat dough wrapped around a stuffing of Japanese vegetables, fruit, or anko bean paste and then roasted in a pan. Persimmon leaf sushi (kaki no ha sushi) has been popular in Nagano with its antibacterial properties and being easy to carry. Then, Nagano produces a lot of wasabi, which is freshly featured in many of its foods, including a wasabi ice cream, and it also produces a lot of honey with varieties by source flowers, e.g., acacia, horse chestnut, buckwheat, apple, blueberry, cherry, etc. Bee larvae and even grasshoppers are featured in some unique delicacies for the brave of heart.