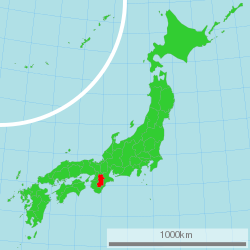 Nara was the capital of Japan from 710 to 794 during which time, the Nara period, it was the nexus of political power, religion, culture and learning in Japan. Today it a mostly a quiet rural area, but it is also one of Japan's most popular tourist destinations. Nara has a population of over 1.3 million with 360,000 of those people residing in the capital, Nara City. Tenri City is home to the headquarters of Tenrikyo, which is one of the largest of Japan's "new religions" or roughly equivalent of Salt Lake City to Mormonism. Nara has a temperate climate in its northwestern basin area, but different in the mountains which comprise the rest of the prefecture. There are few natural disasters in Nara as it is away form major fault lines, and its land-bound position shields it from typhoons.

There is a lot of traditional production in Nara such as ink and brushes, Japanese paper, traditional medicines, lacquer, bamboo whisks, chopsticks, pottery and other crafts. Then, there are more modern industries on the basic side such as food, socks, wood products, plastic, fur, leather, sandals, sporting goods, etc. as well as on the higher tech side such as pharmacy, machinery, metals, rubber, electronic components/devices, etc. the latter of which are centered in industrial parks like Showa in Yamatokoriyama City and Techno Park in Gojo City. Then, there is a very large hospitality industry to accommodate all the tourists. Agriculture comprises a very small amount of the Nara economy but the area is known for its persimmons, strawberries and tea. Then, there is some production of rice and vegetables, including spinach, tomatoes, and eggplants. Meanwhile, Nara has about 50 English conversation schools that hire native English speakers and about half as many other types of educational institutions that may employ foreign instructors.

Nara is home to more UNESCO World Heritage Listings than any other prefecture in Japan. A great number of these sites are located in the vast Nara Park in the capital city with the Big Buddha bronze statute inside Todaiji being the iconic symbol of Nara. This centralization makes Nara much easier to see in a day than a visit to Kyoto where key sites are much more spread out on different sides of the city. Meanwhile, herds of very tame deer wander around this park eating out of the hands of tourists who are eager to feed and photograph them. Then, there are numerous other shrines, temples and tombs (kofun) located throughout the prefecture. Some of the major museums are the Nara National Museum, the Heijo Palace Museum, the Nara Prefectural Museum of Art and the Kashihara Archaeological Institute Museum.

Nara has some impressive and photogenic festivals with the following just being a few of of the major ones: Grass Burning Festival (Yamayaki) in January, Lantern Festival (Mantoro) in February and August, Water-Drawing Ceremony (Omizutori) at Todai-ji, which is actually a fire festival, in March, Firelight Noh (Takigi Ono) at the Kofuku-ji in May, Deer Antler Cutting Ceremony (Shika-no-Tsunokiri) in October.

Local cuisines to try in Nara include some of the following, often with narazuke or Nara's unique method of pickling: Rice Porridge (okaisan) made on green tea has been popular in Nara since it has been served at Todaiji's sacred water-drawing festival, which began 1,200 years ago. Persimmon/magnolia leaf sushi is a summer festival food made with mackerel sushi wrapped in a persimmon leaf, which has some antibacterial properties. Eyes wide open (mehari) rice balls are wrapped in pickled mustard leaves and so big that you have to open your eyes when biting into them. Miwa somen noodles topped with local produce are a common food in Nara. While popular throughout Japan, somen wa introduced from Tang in China in the Nara period, and Miwa is said to be the origin of the production technique. Noppe soup (a vegetable and chicken soup with corn flour) has long been a traidtion at the Kasuga Taisha Temple's on-matsuri festival. Vinegar persimmons are popular at New Years in osechi dishes. Chicken hot pot is cooked in milk. Stewed Yamato-mana contains a pickled leafy vegetable found in Nara, fried tofu, other vegetables and soy sauce.