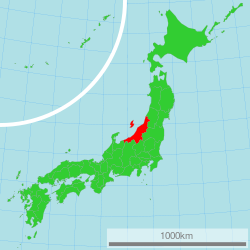 Known as Echigo Province up until the Meiji Restoration, Niigata is a large prefecture (both in size and population) in Honshu's Hokuriku Region facing the Sea of Japan. It has a population of nearly 2.3 million with 800,000 of these people residing in the capital, Niigata City. Niigata has a humid subtropical climate with hot and humid summers, cold winters, significant rainfall and strong winds from the Sea of Japan. Snowfall is heavy in elevated areas but less in the capital and other low-lying areas.

Agriculture, fishing and production of related food products is the largest industry in Niigata followed by mining and some forestry. Rice, namely Koshihikari said to be the highest quality rice in Japan, is the main crop. Accordingly, the Niigata is known throughout Japan for its high-quality sake, senbei (rice biscuits), mochi (glutonous rice cake), and arare (bite-size rice crackers) as well as fish cakes. In addition to some production of chemicals, production machinery and electronic components and devices, Niigata produces a lot of western tableware, metallic tableware, housewares and tools. It also produces the highest volume of azaleas and cut lilies in Japan as well as a lot of flower bulbs and tulips. There are about 100 English conversation schools that hire native English teachers and about half as many other types of educational institutions that may employ foreign teachers. Then a large hospitality industry, namely ski resorts, will employ foreigners with proper visas.

In the area of local food, Niigata created its own fusion dish in 1959 of yakisoba with Bolognese sauce, which locals call "Italian." It is stir-fried cabbage and bean sprouts mixed with noodles fried with Worchester sauce and topped with tomato sauce and white ginger. Tare Katsu-don is an extra tender fried pork cutlet on rice. The Niigata version uses sauce (tare) rather than beaten egg for a sweet and salty flavor. Tsubame-Sanjo ramen" is made using thick udon-style noodles often covered in pork fat and onion topping. Noppei Jiru is a soup made with with offcuts of vegetables pan-fried and simmered in dashi soup, seasoned with shoyu and salt, and then thickened with starch (katakuriko). Itoigawa Black yaki-soba is made with squid ink with sauce and noodle fried with the squid entrails. For desert there is bamboo leaf rice balls, which are chewy mugwort rice cakes made with sweet bean paste from roasted azuki beans, and poppo yaki, which is steamed bread flavored with brown sugar. Poppo is the onomatopoeic sound of a steam train.