Come and Teach in the Beautiful Castle Town of Nakatsu 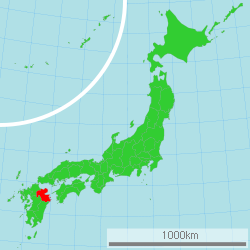 Oita is a rural prefecture located on the northeast side of Japan's southern island of Kyushu. With a volcanic belt, the Kirishima Range, running through it vertically, Oita has come to be known for its hot springs, which it has more of than any other place in Japan. Globally, only Yellowstone National Park in the U.S. has a higher hot-spring output and more geothermal power. Rivers run through mountain ranges and forests that cover much of this prefecture of 1.2 million people, nearly half a million of whom reside in the capital, Oita City.

There are about 35 English conversation schools in Oita, most in the capital city, that will employ native English speakers and then half as many other educational institutions that may employ foreign instructors. Then, the various economic sectors, mainly the hospitality industry, will employ foreigners on proper visas, which will generally be working holiday but also spouse, student, trainee, cultural, etc.

Oita has eight onsen areas, which are also referred to as "hells." The easiest onsen to access may be the popular Ekimae Koto Onsen in central Beppu while the most famous could be Takegawara in Moto-machi and the most opulent may be the Kankaiji Onsen overlooking Beppu Bay. Oita city features shopping with colorfully decorated covered malls, beaches and a zoo as well as sporting events at Oita Stadium, also known as “The Big Eye," and auto racing at Autopolis. Then there is Beppu Tower, Suginoi Palace, which is a spa and hotel complex with many water attractions, and Kannawa, which is a hot steam magic wondering land featuring numerous steaming pools with color variations from their mineral contents. There are abundant hiking trails and destinations in Oita with the volcanic mountain of Mount Tsurumi being top of the list followed by Aonodomon in Yabakei gorge.

Things to see on the cultural side include the Oita Prefectural Museum of History, Funai Castle ruins, Fuki-ji temple in Bungo-Takada, which is the only remaining wooden structure from the Heian period  (794?1192), Usa Shrine where Emperor Ojin was deified as Hachiman-jin (the tutelary god of warriors) is said to be second in prestige in Japan only to Ise Shrine, Usuki Stone Buddhas (60 cliff carvings of Buddha sculpted between the Heian period (794?1192) and the Kamakura period (1185?1333), and the Peacock Buddhist Altar Fitting called Kujaku Monkei with engravings going back to 1209 that tell the relationship between Usa Shrine and its branch shrine Mirokuji.

Oita has many festivals throughout the year to pray for good harvests. Some of these include: Shujo Onie Fire Festival, which is held Kunisaki Peninsula area on the first day of the Chinese New Year to pray for well being, and Hita's Gion Festival held in July with a parade of 12-meter-high floats. There are: Yoshihiro Gaku Traditional Performing Art in Musashi Town on the Kunisaki Peninsula where dances are performed along with traditional music. Manufacturing Process of Sulfur "Flowers" at Myoban Hot Spring when yu-no-hana or sulfur “flowers,” which are crystals that develop naturally on the ground around the springs, are produced in thatched huts, and the Koyo Shrine's Puppet Show, which uses kugutsu puppets that perform dance and sumo wrestling matches.

Oita cuisine may be best known for its "toriten," which is chicken chunks covered in tempura batter and deep fried for a crunchy texture and served with ponzu or mustard sauce. Other dishes include: dumpling ("honcho") soup, which is cooked with vegetables and burdock using miso paste; jigokumushi "hell steaming" with seasonal vegetables and locally caught fish; fugu and mackerel dishes with locally caught fish; Himeshima kuruma ebi (farm-raised prawns); and Bungo beef comes from a Japanese black cow.