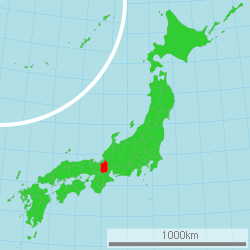 Known as Omi Province or Goshu prior to the Meiji restoration, Shiga is situated in northern Kansai and roughly in south central Honshu. Although landlocked, it encircles Law Biwa, which is the largest fresh water lake in Japan. Shiga has a population of 1.4 million with the majority of these people residing along the southern shore of Lake Biwa in the capital Otsu City or the eastern shore within commuting distance to Kyoto. The western and northern shores are more resort-oriented with white sand beaches and less sparsely populated. The climate differs greatly in the north and south. While southern Shiga is usually warm, northern Shiga is typically cold with high snowfall and many skiing areas. Shiga has a foreign population of 25,000, nearly one third of whom are Brazilians who went to Shiga to work in its factories. The area is generally blessed with abundant natural scenes from its mountains to its lengthy lake shorelines, which are no far away from most places in the prefecture.

In olden days Shiga prospered as an important intersection between economic regions, namely Kinki, Chubu and Hokuriku and the people there came to be known as "Omi merchants." At present manufacturing accounts for more than a third of the prefecture's gross production, one of the highest rates in Japan, with a variety of industries, such as automobiles, electrical and electronic equipment, and pharmaceuticals. There are several clusters of R&D centers as well as a variety of traditional industries like textiles and production of craft-like items. The majority of farmland is used for rice farming, but eastern Shiga is known for raising cattle and southeastern Shiga is famous for green tea. Then there is some fishing and freshwater pearl farming on Lake Biwa as well as a healthy tourism industry. There are more than 35 English conversation schools that hire native English teachers and about half as many other types of educational institutions that may employ foreign teachers.

Much of the things to see and do in Shiga center around Lake Biwa. An American-style paddlewheel boat offers cruises on the lake. The northern shore is particularly scenic with cherry blossoms, and the western shore has white sand beaches. There is skiing in the mountains and excellent views of Lake Biwa. Other things to see include the Aquarium of Lake Biwa Museum, Hikone Castle (having its original keep and one of four national treasure castles) in Japan Mangetsu-ji temple near Katata, Otsu, the Tonda Traditional Bunraku Puppet Troupe (traditional Bunraku puppet theater) in Biwa Town, a preserved ninja house in Koka, etc. Main museums include the Sagawa Art Museum in Moriyama, the Lake Biwa Museum in Kusatsu and the Miho Museum in Koka.

Hikiyama (float parade) festivals are held in 10 areas such as Nagahama, Otsu, Maibara, Hino and Minakuchi. The Nagahama hikiyama festival, which is held in April, is one of the three major hikiyama festivals in Japan and was designated an Important Intangible Cultural Property. The Otsu Matsuri is held in early October and features thirteen tall Gion-like lantern floats, which feature mechanical dolls. Each float has its own tradition, customs, and lineage, and these are paraded around the city throughout the day. Higashiomi holds a Giant Kite Festival along the riverbank in May, and there are many other smaller events throughout the prefecture.

Since olden times, fish from Lake Biwa have made up are large part of the local diet. The most famous lake food in the present time is fermented crucian carp sushi (funa-zushi). In addition to Omi beef, which is a high quality wagyu, there are pickled roots, duck nabe or sukiyaki in northern Shiga, re konnyaku in Omihachiman, somen with grilled mackerel (yaki-saba somen) in Nagahama, and lightly seasoned champon in Hikone.