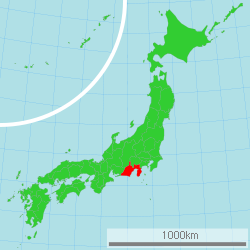 Formed from Totomi, Suruga and Izu Provinces at the time of the Meiji Restoration, Shizuoka is semi-rural prefecture on the eastern edge of Japan’s Chubu region in central Honshu with an extensive coast line facing the Pacific Ocean. It has a population of 3.8 million with 700,000 of those people residing in the capital, Shizuoka City while the largest city, Hamamatsu has a slightly higher population of 800,000. The second largest cluster of Japanese Brazilians (42,000 people) live in Shizuka. Only Aichi is higher at 67,000 while eight other prefectures are in a distant third place with populations ranging from 10,000-18,000. Shizuoka has a humid subtropical climate with hot and humid summers and cool winters while some of its mountain areas are part of Japan’s snow country. With a mild climate, many coastal beaches, stunning views of Mt. Fuji, Suruga Bay, the Izu Peninsula, clear streams, steaming hot springs and a myriad of year-round leisure activities, Shizuoka is known for being a very comfortable place to live.

Shizuoka has substantial clusters of factories and laboratories in a balanced distribution of industries, which has led to it be referred to as the “Manufacturing Prefecture.” On the eastern side these industries include electrical machinery, paper and pulp, medical products, and transport equipment; in the central area they include electrical machinery, furniture and fishery products; and on the western side they include transport equipment, general machinery, chemicals, textiles, and leading-edge optoelectronics. Abundant agricultural, forestry and fishery resources include green tea (40 percent of Japan's production), strawberries, mandarin oranges, peaches, wasabi, Sebago potatoes, roses, tuna (largest product volume in Japan), bonito, sakura ebi, shirasu sardines, etc. There are about 140 English conversation schools that hire native English teachers and about half as many other types of educational institutions that may employ foreign teachers. Then there is also a very large hospitality industry with many hot springs, coastal and ski resorts.

Having abundant natural resources and with many of its cities located on the ancient Tokaido Road that connected Kanto with Kansai in olden days, Shizuoka has developed its own distinct cuisine over many centuries. Shizuoka-style oden is a unique version of this Japanese comfort food that is particularly popular in the winter months. In addition to the normal contents of boiled eggs, daikon radish, konnyaku, and processed fish cakes, the Shizuoka version is stewed in a dark-colored dashi broth flavored with beef stock and dark soy sauce. All ingredients are skewered and the bowl is topped with aonori seaweed powder, Japanese mustard (karashi) powder and dried fish powder. There is also an oden festival in Shizuoka City in March. Tiny sakura shrimp are only caught in Shizuoka and appear in many local dishes in a variety of ways. Here too there is a Sakura Shrimp Festival in May. Gyoza restaurants are ubiquitous in Hamamatsu City, which has the highest consumption volume in the country, so look for many local varieties but most served with the local custom of crunchy bean sprouts on the side. Shizuokans take pride in their wasabi (highest production in Japan and internationally), and it will often be served fresh with a shark skin grater for eating with locally caught tuna (again the highest amount in Japan). There is even a wasabi ice cream. Other local foods include fried oysters (kakiage), grated yam soup (tororo), abekawa mochi (pounded rice cake dusted with roasted kinako soy bean flour), and Fujinomiya yakisoba.