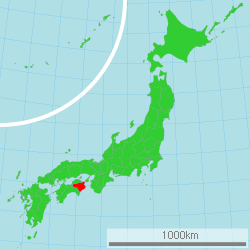 Known as Awa province up until the Meiji Restoration, Tokushima prefecture is located on the eastern edge of the island of Shikoku . With a population of just 750,000, it is the smallest and least populated prefecture on the island. About 40 percent of these people reside in the capital, Tokushima City

In addition to its traditional agriculture, fishing and forestry, Tokushima is known for two types of light technologies. Having been connected to industrial areas in Kobe by the Akashi Channel Bridge, Tokushima is one of Japan's leading producers of fiber optic broadband environments and LED products. The prefecture is Japan's largest producer of cauliflower and lotus roots, and it is the only place where Japanese indigo is made. Tokushima has about 40 English conversation schools that hire native English speakers and half as many other educational institutions that may employ foreign teachers.

Much of the things to do in Tokushima center around nature. Having one of the three fastest tidal seascapes in the world, viewing the Nartuto whirlpools by sightseeing boat is popular among visitors. There is hiking in the Iya Valley and its Oboke gorge, which includes crossing several vine bridges including a 45-meter bridge near Oboke gorge where the spaces between the slats offer a view to the river below. The 88 Temple Pilgrimage, a 1,400-kilometer route around Shikoku begins in Tokushima with the Ryozen-ji is temple as the first stop. The terraced Ochiai Village, which is located deep in the Iya Valley, is located on a mountain side with 390 meters from the base to the highest building. It contains thatched rental known as House of the Flute, which was restored and managed by Japan author Alex Kerr. Historically, indigo dyeing was a widespread traditional craft in Tokushima, and today it continues at a hands-on craft museum in Aizumi, which describes the history of the craft and allows visitors to dye their own piece of cloth.

The most famous festival in Tokushima is the Awa Odori Festival, which is held annually from August 12-15 with more than one million visitors. It dates back 400 years, has a carnival type atmosphere and has its own Awaodori Kaikan Museum to explain its history. Such is the popularity of this festival that the Tokushima City's airport was renamed Awa Odori Airport. Going into the Iya valley, the Heike Matsuri festival is held on the last weekend in October to celebrate defeated Heike samuari came to the valley 800 years before to hide. There are performances with theatrical reenactments. In January of each year there is Snowball Fight Competition (yukigasssen) in Higashi Iya. The locals have made it into a rather elaborate event with teams, participating classifications and practices held prior to the event. Winners will proceed to the national championships in Nagano Prefecture.

With abundant quality agricultural and sea food products, Tokushima has been referred to as the "kitchen" of the Kansai region. Awaodori free-range chicken is served roasted, grilled, fried or in hot pots. Kaizoku ryori (pirate food) is grilled seafood, and Dekomawashi is potato, tofu and konnyaku grilled on sticks with a miso sauce. River trout (amego) is a popular in Tokushima and sourced from local hatcheries. It is often salted, skewered and roasted over charcoal as is a freshwater fish custom in many parts of Japan. Soba rice porridge from the seeds of the soba plant developed in areas where rice was difficult to grow and said to have been brought by the Taira warriors who took refuge in the area after the Genpei War (1180s). Finally, Tokushima Ramen, which is known throughout Japan, features a pork bone broth with soy sauces topped with a sweet and spicy pork belly and a raw egg.