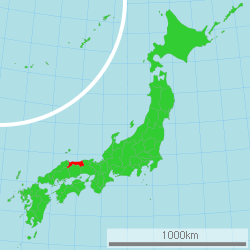 Tottori is a small prefecture in Japan's northern Chugoku region that faces the Sea of Japan. It has remains of some of the earliest human settlements in Japan dating back to the Jomon period (14,000 B.C. to 300 B.C.). Known as Hoki and Inaba provinces up until the Meiji Restoration, the name Tottori, literally "taking birds," is said to have originated from the area having an abundance of water foul a millennia ago. The population of just under 600,000 makes Tottori the least populated prefecture in Japan with about one-third of these people living in the capital, Tottori City. Inshu or Umpaku dialects, which are divisions of the Chogoku dialect is spoken in Tottori, and the prefecture has a humid subtropical climate with hot summers, cool winters and rain throughout the year.

Traditional industry in Tottori has centered around electronic components and devices while it is showing significant growth in the fields of automobiles, aircraft and medical devices. Agriculture (in particular nashi pears, nagaimo yams, scallions, long onions, watermelons and lots of rice), fishing and hospitality are also important parts of the local economy. Then, there have been recent local initiatives to foster human resources development in the area through government cooperation with local technical schools and universities. With its small size and population there are fewer than 20 English conversation schools in Tottori that hire native English speakers and half as many other types of schools that may hire foreign teachers.

Tottori's most popular tourist destination are its sand dunes and adjacent Sand Museum near the capital. The only such large dunes (over 30 square kilometers) in Japan, these were formed from sediment flowing from the Chugoku Mountains along the Sendai River out into the Sea of Japan and then redeposited by the waves and wind. Other things to see include, Fuji-like Mt. Daisen (the highest peak in the Chugoku Mountains at 5,673 feet), Mukibanda Yayoi remains (the largest site of Yayoi period settlement in Japan), the Ishitani Residence (an Edo period family residence designated a National Treasure of Japan), Tottori Hanakairo-Flower Park (the largest flower park in Japan), Sanbutsu-ji (a Heian period temple designated a National Treasure of Japan), Misasa Onsen, Hamamura Onsen, Jinpukaku (a late Meiji period residence), Kannon-in Japanese garden, Tottori Castle, Shikano Castle, etc.

A weekend-long San In Beach Party, one of the biggest in all of Japan, is held in Tottori at the beginning of every summer. During Obon, the Shan-Shan Festival is held during which parades of dancers perform with umbrellas, a tradition dating back to a time when such an umbrella dance ended a drought. Other events include: the Sakenotsu Tondo Festival at New Years, Tottori Sakura Festival in April, the Hoenya Festival biannually in April, the Opening of the Waterfall (Amedaki) Festival in June, Kaigarabushi Dance Festival in August, and the the Tottori Sand Dunes Illumination in December.

Some of the sea bounty to try in Tottori include, snow crab (matsubagani), crab soup (kanjiuu), white squid, mosaebi shrimp, rock oysters and sandfish (shiro hata). There is a Kotoura ago katsu curry made from the local white fish (ago). The local Tottori gyukotsu ramen has a cow bone broth as the basic soup. Then, there is Tottori tofu chikuwa, which is made by mixing firm tofu with white fish. Itadaki is made with rice and vegetables wrapped in a large sheet of deep fried tofu and cooked in fish stock. Tottori hormone yakisoba or “horu soba” is made from fried beef offal and noodles. Tottori zoni is soup with mocha (pounded rice cakes), okowa is sticky rice that has been slow cooked in fish broth with various ingredients like chicken, vegetables, mushrooms, chestnuts, etc.