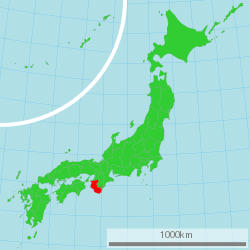 Formed from the western part of the Kii Provinces at the time of the Meiji Restoration, Wakayama is a mostly rural prefecture located on the Kii Peninsula and facing the Pacific Ocean on both its western and southern borders. It has a population of 950,000 with about one-third of these people residing in the capital, Wakayama City. Wakayama has a humid subtropical climate with hot summers, cool winters and significant rainfall throughout the year.

While Wakayama possesses some industry, traditional agriculture, fishing and forestry make up the majority of its economy. Its fishing industry also has a dubious whaling heritage that continues to this the present time. It makes annual headlines worldwide when the fishing port of Taiji holds a gruesome, bloody dolphin drive between September and February, which received great notoriety in the 2009 film, “The Cove.” Wakayama, sometimes referred to as the "Fruit Kingdom" (Kajuokoku Wakayama) is the leading producer of oranges and apricots in Japan even having its own brand, the "Arida Orange," which have been produced in the Arida area for more than 400 years. Then the area produces about 70 percent of Japan's apricots.

Mt. Koya in Ito is the Shingon sect of Japanese Buddhism and a popular a pilgrimage site with very old temples amidst the tall cedar trees, and this area has been recognized as a UNESCO World Heritage site. Then, there are some Kumano Shrines are on the southern tip of the prefecture. Other things to see and do in Wakayama include Wakayama Castle, Wakayama Marina City, The Museum of Modern Art in Wakayama, Nachi Falls, sightseeing boats in the Doro-kyo Gorge, hot springs at Shirahama, Kawayu, and Yunomine, Hinokuma Shrine, Kamayama Shrine, Kishu Tosho-gu, Choho-ji, etc.

The 1,700-year-old Nachi Fire Festival, which is held in July, is considered to be one of Japan's most sacred festivals. Men carry 12 huge torches up and down a stone stairway to the falls to pay respect to the waterfall's god. The Kishu Odori Bundara, which is a parade around the Wakayama Castle area, is attended by about 100,000 people. Participants use a kishu odori (dance) style that pays homage to Bunzaemon Kinokuniya. The Benkei Festival in Tanabe has a fireworks display and a performance of The Tale of Benkei. One thousand performers dance in yosakoi and benkei geta. There are nearly 100 other local festivals and summer fireworks shows.

When it comes to food, Wakayama may be most famous for some of its condiments. The Yuasa, Arida and Hidaka regions have long produced Japan’s best soy sauces and miso, some of which date back seven centuries. Kishu Yuasa soy sauce is the most famous still made by hand with traditional methods in Yuasa. This is where Japanese soy sauce was discovered when a monk was making fermented kinzanji miso-bean paste that had been introduced from China in the Kamakura period (1185-1333). At one point Yuasa had more than 92 producers of soy sauce in its small town. Then, Japan’s best sansho pepper is produced from prickly ash trees in Wakayama. It is particularly used with grilled eel (unagi-no kabayaki), and it is one of the main ingredients in the Japanese seven-spice blend known as shichimi.

Wakayama ramen, known locally as chuka soba, was voted "Japan's most delicious" by a TV food show. It is made with a pork bone and soy sauce broth (tonkotsu-joyu). Wakayama beef is a well marbled meat in typical wagyu style, but using Kumano cows, which have been carefully bred since the mid-Heian era (794-1185). Kishu umeboshi is Wakayama’s hallmark salt-pickled plum (umeboshi), which are sold in varying salt levels from mild to strong. These umeboshi are sold nationwide under the Kishu brand. Then, temple lodgings serve a Buddhist vegetarian cuisine called shojin-ryori, which is made using only vegetables and edible wild plants, and omitting pungent ingredients like garlic and onions. Other local specialties include fresh cut tuna, salt pickles, deep fried whale (kujira no tatsuta age), meharizushi (a rice ball covered with a pickled mustard leaf), nare-zushi, a rice ball with fermented fish inside and optionally wrapped in persimmon leaves, kue nabe (a hot pot dish made from the longtooth grouper (kue), dried fish (himono), etc.