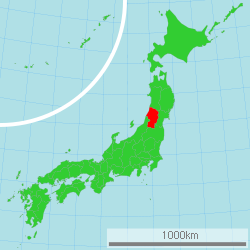 Known as a part of Dewa Province prior to the Meiji Restoration, Yamagata is located on the southwest corner of the Tohoku region facing the sea of Japan. There are about 1.1 million inhabitants with 250,000 of them living in the capital, Yamagata City. The prefecture is basically surrounded by mountains with most of the population located in an inland valley with the Mogami River flowing through it. Summers are hot and humid, and winters are cold and snowy with some of the highest snowfalls in Japan.

Yamagata had been known as an iron casting place for nearly 1,000 years, and this tradition has continued to modern times with advancement of machining techniques and establishment of industrials clusters that produce telecommunications equipment, electronic components, production machinery, electric machinery, etc. as well as organic electronics and biotechnology.

While fishing, rice farming and other agriculture is widespread in this mostly rural prefecture, Yamagata is known for being largest producer of cherries and pears in Japan while it also produces large quantities of grapes, apples, peaches, melons, persimmons, watermelons, etc. Then, Yamagata beef is also well known in Japan. There are quite a few ski resorts, onsens other hospitality businesses that may employ foreigners while there are only about 20 English conversation schools that hire native English speakers and about half as many other educational institutions that may use foreign instructors.

Yamagata’s largest festival is the Hanagasa Matsuri in Yamagata City on the first weekend in August when over 300,000 people come watch thousands of people perform the hanagasa dance in the city center. In February, a snow lantern festival is held in Yonezawa at the Uesugi Shrine. Hundreds of candle-lit lanterns light pathways dug into the snow around the shrine. Yonezawa is also the site of the Uesugi Festival in mid-spring. The festival features a re-enactment of the Battle of Kawanakajima on the banks of the Matsukawa River. he otherwise unremarkable city of Shinjo, in Yamagata, is proudly home to Shinjo Matsuri, which is arguably the best festival in Touhoku. The Shinjo Festival is celebrated in late August over three days with citywide parades of giants floats that depict stories.

Cherries, pears and mountain vegetables are common elements to many Yamagata meals, and area’s wagyu called Yonezawa Beef is featured in shabu shabu pots at restaurants throughout the prefecture. Yamagata’s version of imoni, which is a shoyu-based taro potato stew with beef or fish and seasonal vegetables, is so popular that there is even an Imoni Festival. Hiyashi ramen or cold ramen is said to have originated in Yamagata and has become staple summer food throughout Japan. Common toppings include cucumbers, green onions, seaweed, meat, etc. Then, Yamagata has a unique udon called hippari udon, which is mixed with natto (fermented soy beans). While “dashi” is ordinarily a flavored broth, in Yamagata it is a soup with finely chopped vegetables with konbu mixed in to give it a slimy texture that Japanese are fond of.