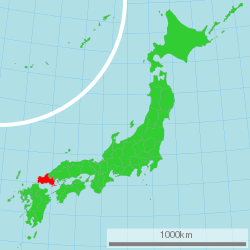 Formed from the merger of Suo and Nagato Provinces in the wake of the Meiji Restoration. Yamaguchi lies on the southwestern tip of Japan's main Honshu island. It borders the Sea of Japan, the Seto Inaland Sea and the Kanmon Strait, which connects the first two. Yamaguchi has a dry and mostly warm climate throughout the year as well as few earthquakes or direct hits by typhoons. It has abundant water resources, clean air and beautiful landscapes. The population of Yamaguchi is nearly 1.4 million people with its capital at Yamaguchi City, but the largest city is Shimonoseki, which has served as a gateway to Kyushu from olden times to the present.

In prewar periods Yamaguchi became an industrialized area with shipbuilding, chemicals, machinery, and metal working plants. Industrial activities continued after the war with particular emphasis on petrochemicals, but also including steel and manufacturing, including automobiles. Yamaguchi has approximately 50 English conversation schools that hire native English conversation teachers and about half as many other types of educational institutions that may hire foreign teachers.

The Kintai Bridge spanning the Nishiki River in Iwakuni is one of the most picturesque scenes in all of Japan. It is also considered a symbol of western Honshu on one of the best places to view cherry blossoms. Akiyoshidai Park is a popular destination with Japan’s longest cave, the Akiyoshido. Then there is a Kaikyo Yume Tower, Safari Land, Karato Fish Market, Iwakuni Castle, Hagi Castle, Motonosumi Inari Shrine, Akama Shrine, etc.

Kawara Soba or "roof tile soba" is a local specialty in Yamaguchi. It is said to have originated during the Seinan Rebellion in 1877 when soldiers cooked wild grass and meat on roof tiles. Today green tea soba is placed on a hot roof tile with beef, fried egg and seaweed. Then daikon and chili is added to a special bonito sauce. As Yamaguchi supplies much of the fugu (poisonous blow fish) for Japan, it is used all over the prefecture in an assortment of sashimi dishes. Then Iwakuni features a unique type of sushi served in squares with what appears to be chirashizushi on top.