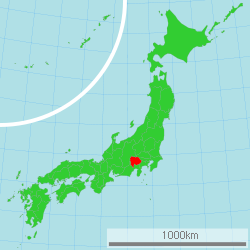 Known as Kai Province before the Meiji Restoration, Yamanashi is a mostly rural landlocked prefecture in central Honshu surrounded by mountains including Mt. Fuji on its east side. It has a population of 820,000 with just under 200,000 of these people residing in the capital, Kofu City. Yamanashi has a humid subtropical climate cold winters and hot summers although temperatures become colder in the mountain areas. Shielded by mountains on all sides it has less rainfall than neighboring prefectures. Yamanashi it noted for being the home of pre-eminent daimyo Shingen Takeda (1521-1573), who had attempted to unify Japan from his stronghold in Kofu City before Nobunaga Oda succeeded with unification. Takeda is still celebrated in present day festivals and pop culture throughout Japan.

Yamanashi has one of the largest industry concentrations in Japan for mechanical electronics, which include electronic component manufacturers, robots, automated systems and other mechatronics manufacturers as well as semiconductor devices, etc. Then there are many traditional industries with jewelry crafting perhaps being the largest. Yamanashi is one of the major fruit producing regions in Japan producing more grapes, peaches, plums, etc. as well as wines. In addition, about 40 percent of Japan's domestic mineral water comes from the mountains that surround Yamanashi. This quality water was taken note of by the Suntory Group, which opened its Hakushu distillery in Hokuto Town, Yamanashi. Then there are about 40 English conversation schools that hire native English teachers and about half as many other types of educational institutions that may employ foreign teachers. Ski and other resorts, onsens, etc. comprise a large hospitality industry that will also employ foreigners with proper visas.

The scenic beauty of Yamanashi may be the best in Japan with Mt. Fuji and its five lakes to the east, the Japan Alps in the south and the highland resort region of Kiyosato. In addition to hiking, climbing camping and skiing, other popular destinations include the Fuji-Q Highland amusement park at Fujiyoshida, Kofu Castle, Yogaiyama Castle, Maizuru Castle Park, the Senga Falls, Koshu wineries, Shimobe Onsen, Isawa Onsen, Yamanami Onsen and Yumura Onsen Erin-ji Temple in Koshu, Kuonji Temple at Minobu, Kai Zenko-ji Temple in Kofu, Takeda Shrine, Yamanashi Science Museum, etc.

In March, the Shingen Festival is held in grand style around Kofu Castle and the Takeda Shrine to celebrate Takeda Shingen's legacy. There are several parades and the largest public history play in Japan with over 1,000 costumed samurai marching. At the end of August, he Fujiyoshida Fire Festival is held to mark completion of Mt. Fuji's summer climbing season. In October, the Yatsugatake County Fair and Paul Rusch Festival are held at Kiyosato to celebrate Rusch's contributions to local agriculture and U.S. Japan friendship.

The most popular dish in Yamanashi is hoto, which was said to be the favorite food of Shingen Takeda when his army was in the field. This is a stewed flat, wavy udon noodles, seasonal vegetables and meat in a miso-flavored soup. Yoshida Udon from Fujiyoshida City are also popular. This dish has firm, thick noodles in a salty-sweet sauce, and is topped with a variety of local ingrients including cabbage and sometimes horsemeat. A local condiment, "suridane" (from chilis), is also often added. Fuji-mabushi is salmon or rainbow trout on served on rice. With growing deer populations damaging local crops, venison curry has become popular. Then, there is torimotsu, which is chicken offal stewed in a teriyaki-style sweet soy sauce with organs including gizzard, heart, and liver as well as soft egg yolks. Originating in Yamanashi from postwar food shortages, this hearty dish has spread throughout Japan.