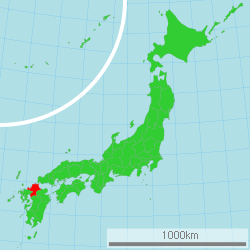 Located on the northern tip of Kyushu facing Honshu across the Kanmon Straits with the Sea of Japan on its left side and the Pacific Ocean on its right side, Fukuoka Prefecture is one of Japan's major economic and industrial centers with a population of 5.1 million. The capital, Fukuoka City is home to much of this economic activity while much of its industry can be found in the adjacent Kitakyushu City (formerly Kokura), both cities having populations over a million. In addition to being the most populated and developed of the prefectures in Kyushu, it also serves as a gateway to these other prefectures.

Unlike most other areas of Japan, which is generally blessed with abundant water resources, Fukuoka had experienced a series of water shortages and periodic rationing from the 1970s to the 1990s that accompanied rapid growth in preceding decades. There were just no major rivers or lakes nearby from which to draw off the necessary water supply a growing metropolis. Since about 2000, however, Japan's largest desalination plant has gone online, thereby greatly alleviating this problem.

With a multitude of companies locating production, logistics and other facilities in Fukuoka, it accounts for more than 40 percent of Kyushu's economy while agriculture, fishing and forestry follow in distant second, third, and fourth positions in the local economy. In line with its population and economic position, Fukuoka has approximately 200 English conversation schools that employee native English speakers and half as many other types of educational institutions that may hire foreign teachers. As in any major city, all sorts of other types of jobs can also be found in Fukuoka for foreigners with proper working visas.

As one of Japan's major regional cities, Fukuoka City has more than 10 museums, including the Fukuoka City Museum, Fukuoka Asian Art Museum, Genko Historical Museum (i.e., Museum of the Mongol Invasion), etc. Major sporting events and concerts can be seen at Fukuoka Dome and Avispa Fukuoka. Other points of interest include: Fukuoka Tower (the tallest seaside tower in Japan with an observation deck at 123 meters), Riverwalk Kitakyushu, and Yanagawa Canal ("the Venice of Japan). On the cultural side there is Kokura Castle (built in 1602 but reconstructed in 1959) and adjacent Japanese garden and Nanzo-in (a Shingon sect Buddhist temple notable for its reclining Buddha, said to be the largest bronze statue in the world). Then notable shinto shrines include, Kora taisha, Sumiyoshi-jinja, and Hakozaki-gu, Dazaifu Tenman-gu.

The major festival in Fukuoka is the Hakata Dontaku Festival, which is held annually in Tenjin, Fukuoka City on May 3 and 4, over 2 million spectators come to watch a procession with 30,000 participants dancing in colorful costumes along with colorful floats. Dontaku is from the Dutch word "zondag" meaning Sunday, which was declared as a holiday by the Meiji Emperor 150 years ago. From July 10-15 the Kushida Shrine holds the Hakata Gion Yamagasa festival which features 10-meter tall warrior floats that thousands of men in loincloths run through the city chanting "Yoisa!" Other Gion festivals are held in Kitakyushu in July, and the Kitahara Hakushu Festival, Yanagawa is held from November 1 to 3 in celebration of the life of a popular Taisho/Showa era poet by the same name.

Having a close proximity to mainland Asia, Fukuoka has developed a variety of unique dishes, many of which have been influenced over millennia by Chinese and Korean cuisine. Some of these have popularly spread throughout Japan, with Hakata ramen possibly at the top of this list. This broth of tonkotsu (pork bone) has thin noodles and a thick creamy soup that is topped with chashu (sliced pork). Other local cuisine includes mentaiko (spiced cod roe, often inside rice balls or on pasta), which is said to have originated in Fukuoka, tetsunabe gyoza (iron pot gyoza), which is served on ceramic or hot iron plates, and motsunabe (beef or pork intestines cooked in vegetables and miso stock). Other offal dishes include grilled cow lungs.