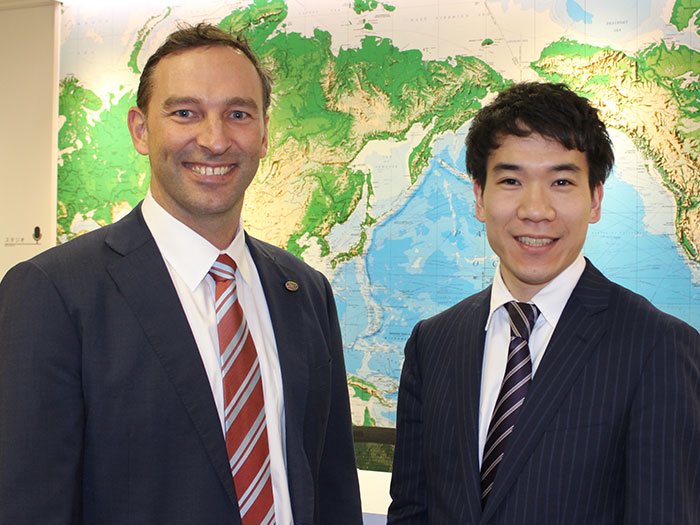 With over 1,300 schools, Tact Kodomomirai is a rapidly expanding employer in Japan that hires foreigners (both domestically and from abroad).  Jobsinjapan.com sits down with James Gibson and Ryo Kaizu to discuss their more well-known schools called Kids Duo and WinBe to give you a better idea of what it is like to work there.

Q: Can you give some background on the company?
A: Certainly. Tact Kodomomirai is part of the holdings group Yaruki Switch. The company was founded in 1989 and began, at that time, a unique personalized-approach cram school called School IE. In 1997, following the initial successes, we began to franchise the business and now have over 1,300 schools. The resultant financial stability and resources have enabled us to branch out in new directions with an emphasis on English and the hiring on Native English speakers. WinBe, an English language school, was started in 2000.

In 2008 Kids Duo began as one of the first daycare and afterschool care programs to offer a full English immersion environment setting. Kids Duo International, an international bilingual kindergarten, started up in 2013. That’s when the company also became a holdings group.

Q: Are they growing?
A: Very rapidly, yes. Both brands are expected to reach beyond the 100-level within the upcoming fiscal year. Kids Duo International, with two well established schools, will begin franchising from April with two brand new schools opening at that time.

Q: How many teachers do they employ?
A: All told, there are about 300 native English-speaking employees in the schools, and we are looking to add staff for all of them.

Q: What geographic areas do you serve?
A: There is a heavier concentration of WinBe and Kids Duo schools located in the Kanto Area (near Tokyo), but we have facilities spread all over the country, as far north as Hokkaido and south as Kagoshima. Most are near major metropolitan areas such as Nagoya, Osaka, Kyoto, Fukuoka, Hiroshima, Sendai, etc. WinBe schools can also sometimes be found in more rural areas, servicing the communities living there which also creates options for staff seeking different experiences while living in Japan.

Q What student age groups do you service?
A: Primarily from ages 3 to 12. Some WinBe schools may serve high school and adults, but that segment comprises only about 20% of the whole; the majority is preschool and elementary ages. Kids Duo International is preschool-only.

Q: That seems to be a very young age to begin English education
A: As many people will attest, language acquisition from such a young age has tremendous benefits and our approach to teaching really suits that age group. Notably with Kids Duo, which provides after-school daycare services, many parents find that this really suits them also, as they look to continue their careers without having to drop out of the workforce after marrying and having children.

Q: So the parents get daycare plus English instruction?
A: Yes, it’s perfect, right? It ends up killing two birds with one stone; the children are taken care of, plus they are immersed in English-only environment. Some go for 25-30 hours per week.

Q: That’s not instruction per se, though, right?
A: It’s immersion, so while there is a more formal instructional component for English, much of the curriculum comprises songs, games, and other activities that involve the use of English.

Q: Are phonics used?
A: Yes, definitely! Phonics is extremely effective for young learners and is the foundation of our nationwide Spelling Bee Competition.

Q: What types of instructors are you looking for?
A: It certainly helps to have a lot of energy, be friendly, and to have a fondness for children. This needs to be dealt with a sense of professionalism, pride, and responsibility, as every day instructors will be interacting directly with parents when they come to pick up their children.

Q: Is that a hard balance to find?
A: It can be at times. Teachers need to be aware that high energy is good, but a class environment needs to be safe and professional as well. So it’s more about us providing the best training, feedback and support to enable instructors to reach their potential.

Q: Are the native English instructor jobs full-time then?
A: Yes, about 99% are full-time positions.

Q: How about the qualifications for the native English instructor jobs?
A: Most of them are visa-related, such as a college degree. We have found that these days, it is possible for holders of Associate of Arts (AA) degrees to obtain visas. We also look for a commitment of at least a year. We prefer, however, that new teachers will be willing to stay on for longer, renewing their contracts. A longer stay helps create a sense of stability for both the teachers and the students. Physical fitness is also important, as the jobs can be physically demanding.

Q: Are there age restrictions for applicants?
A: Formally, no. Age is just a number and if we have the best candidate we will hire them. But because of the demands of the job, we tend to hire people from university graduate age to the mid-30s.

Q: How about degrees and credentials such as TESL and TOEFL certificates, etc.?
A: Those are helpful and deemed advantageous, but generally are not essential for the hiring process.

Q: What does an average work day look like?
A: For Kids Duo, we have three main programs, Pre-Kindy that runs from the morning and Kindy and Elementary which run in the afternoon. Children are generally with us for 4-5 hours.  During the shift, you’ll be preparing, teaching, cleaning, and giving feedback to parents. Activities include arts and crafts, singing, pattern blocks, phonics, dance, geography, science, etc. – all done in English.

For WinBe, most teachers will teach 4-6 50 minute lessons a day, with an average 25-28 lessons per week. Outside of lesson time, the duties are fairly similar and include cleaning, preparing and interacting with parents.

Q: What are the school hours?
A: We work five days a week. For Kids Duo, the hours are generally Monday through Friday, nine hours, with a one-hour break. The native English teachers work in shifts that rotate, which could be 9:30am-6:30pm, 10am-7pm, or 11am to 8pm. WinBe teachers usually will have a Tuesday through Saturday schedule and work afternoons and evenings on weekdays, starting earlier on the Saturday in most cases.

Q: What is the average term length for teachers?
A: WinBe, established longer, has a lot of variation – three, four, five, seven, even 10 years is not uncommon. For Kids Duo, two to three years is average, but is gradually increasing, too. After finishing, we find many teachers are inspired to work with children as a career and go back to their home countries to get advanced education for teaching professionally.

Q: What nationalities are most common among new hires?
A: North America, followed by England, Australia, New Zealand, and South Africa. Some teachers are not originally from native English teaching countries, but are nevertheless very proficient, and have no problems with accent.

Q: Accents can vary widely from nationality to nationality. Is that ever a problem?
A: We ask that teachers be conscious of their own accent and understand the comprehension challenges their students face. The phonics course we use is based on a Standard American English accent.

Q: Are there any intangible aspects to teaching with your company, for example how employees comport themselves in public?
A: Yes. A lot of teachers who first come to Japan are not necessarily aware that they are essentially ‘on stage’ 24 hours a day and are seen as ‘ambassadors’ of their home countries and the company. Also, they may live near the schools in which they teach. So they need to be aware of their ‘sensei’ status, which is assumed to be a respected role model.

Q: Do you hire domestically as well as abroad?
A: Yes.

Q: What is the male-female hiring mix?
A: In prior years, it was more male dominated. This was more a direct result to the applications received rather than any hiring preference. These days the numbers are much more evenly balanced with a number of female staff.

Q: Do you want teachers to be able to speak Japanese?
A: It does help for them to acclimate themselves to living in Japan and remove some of the stress associated with being unable to perform simple daily tasks unassisted. There are opportunities to practice Japanese with staff when no children or parents are present. However, the schools are full English immersion environments, so all teaching and communications must always be done in English with the students and parents.

Q: Are there any incentives for teachers to extend their stays?
A: Yes. One of the greatest things about Tact Kodomomirai is the upward mobility opportunities that exist for non-Japanese staff and the chance to gain ‘regular full-time employee’ status, often a rarity in this industry where most positions remain contracted. With the growth that we and our franchised schools have experienced and continue to experience come a wealth of opportunities, not just in the classroom, but also with curricula development, training, management and hiring. For those preferring to develop their career in the classroom, performance evaluation and a structured pay rise system exists.

Q: What other positions are available?
A: An instructor may wish to expand their teaching experiences through transferring to one of our other schools, for example; Kids Duo to Kids Duo International, provided their skill set is seen as compatible for that position.

Q: How about performance evaluations for students?
A: We have a number of events throughout the year for students, the largest of which are Spelling Bees and Speech Contests. Spelling Bees, now in the seventh year, have a national Final held in Tokyo or Yokohama every year where the best students from each region congregate.

Q: Do teachers interact with parents at all?
A: Teachers are strongly encouraged to build a rapport with parents, so that parents can see the benefits of an immersive environment, and become more invested in their child’s growth.

Q: How about training for new hires?
A: Kids Duo instructors have three to four weeks of training. The first week is an intensive orientation to Kids Duo, our teaching methods, class management, programs and a ton of role playing and brainstorming classroom activities. The bilingual staff and the native English staff train together so that everyone is on the same page from day one. From the second week, on-the-job training at the schools begins. WinBe has a similar approach, with generally just the one week of on-the-job training, often followed by a few days of transition with the outgoing staff.

Q: How are living accommodations handled?
A: For teachers new to Japan, we have an arrangement with Leo Palace and act as a guarantor for apartments. For new hires already living in Japan, we do our best when assigning schools to accommodate their current housing situation.

Q: What’s the average commute time?
A: Thirty to forty minutes on average. We try to keep it under an hour, but during the training, it can exceed this at times.

Q: How many years has the longest-tenured native English speaking teacher been with the company?
A: At Kids Duo, eight or nine years (now Vice Principle at one of our Kids Duo International schools). At WinBe, 17 years (me).