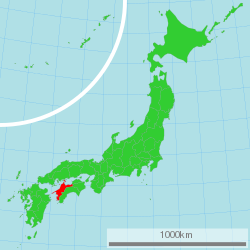 Known as Iyo Province before the Meiji Restoration, Ehime Prefecture faces Japan's inland sea and forms the northeastern side of the island of Shikoku. It has a population over 1.3 million with about 40 percent of those people residing in its capital city of Matsuyama. The dialect spoken in Ehime is referred to as the Iyo dialect. Ehime has a warm climate and pleasant natural surroundings with long coastlines and mountains on the interior.

Historically a maritime area, Ehime Prefecture presently accounts for 40 percent of all Shikoku's manufactured goods with large producers in industries such as paper, chemicals, non-ferrous metals, carbon fiber, etc. Imabari City still serves as a maritime center for marine goods while there is much agricultural production in the southern part of the prefecture. By volume, Ehime is the leading producer of citrus products in Japan with over 40 different varieties, including the ubiquitous mikan. There are about 50 English conversation schools in Ehime that hire native English speaker and about half as many other types of educational institutions that may employee a few foreign teachers.

Ehime's most famous place may be the Dogo Onsen, which is Japan's oldest hot spring. With a history of use going back 2,000 years, Prince Taishoku was said to have bathed in its waters about 600AD. Matsuyama Castle (built at high elevation in 1603) is accessible from the downtown area by a chairlift (Matsuyamajo Ropeway) and offers excellent views of the city. Other places to visit include the Museum of Ehime History and Culture, Shikoku Seiyo Geopark, Omogo Gorge (Omogokei) and Suiha Kogen

A mud festival, "Doronko Matsuri" is held annually in Shirokawa, Seiyo. This seems to be a light-hearted event to seek good crops from the shinto gods. There are drums, dancing girls and bean throwing to cast our devils. The Kazayaha Sea Festival (Kazahaya Umi Matsuri) is standard summer fireworks festival just outside of Matsuyama City. The Saijo Festival features about 150 Danjiri wooden floats and Mikoshi portable shrines from local neighborhoods, and it culminates in “Kawairi” on 16 October when the danjiri are floated on the river to be taken to Isono Shrine.

Local food includes a lot of sea bream (tai) dishes, particularly popurlar in the Uwajima district. Then, there are unique versions of yakitori (grilled on hot plates rather than sticks) and champon (from local produce and fishing). Jakoten is a fried fish cake from a white fish, and Satsuma-jiru is a miso-flavored pork and vegetable stew.