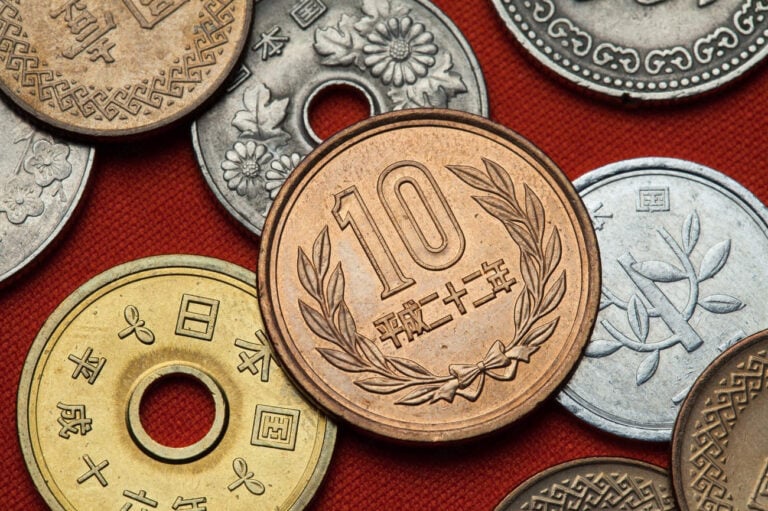 One simple way to gain an understanding of another culture is to look at who they immortalize. Great statues, monuments and indeed even currency are used the world over to show off leaders, innovators and cultural symbols to both their own people and to foreigners. One of the first things you’ll do when entering a country is perform some kind of currency exchange, and once you do that you’re already carrying history in your pocket. As such, the presentation of your currency often serves as a first impression of your culture—your beliefs, aspirations and priorities.

There’s a lot you can learn about Japan just by studying the people and symbols of Japanese Coins and bills. So much so that it’s worth splitting into two articles; one for each form of cash. To that end, we’ll start by discussing every denomination of coin used in modern Japan and what cultural symbols they contain, as well as make some conclusions about what Japan communicates about itself through such iconography. 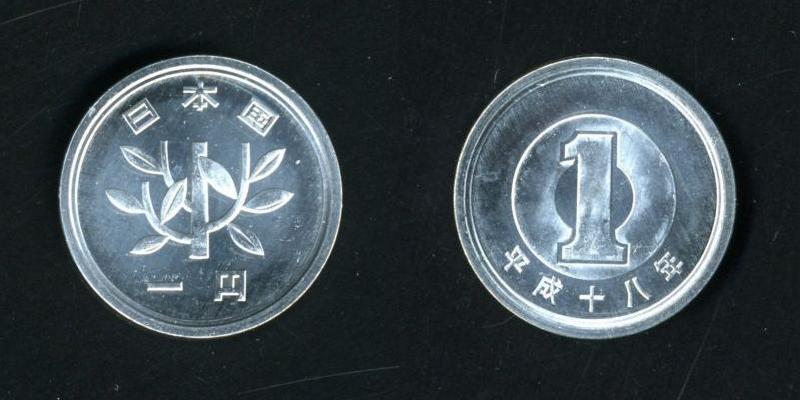 The 1-yen coin is given a different design on each side, as are the rest. On one side, the value plus minting year are displayed, with the minting year using the imperial date format. On the other side the value is once again displayed (this time in Kanji), as is the country’s name, along with a symbol of a young tree. According to the Mint of Japan website, this tree “symbolizes the healthy growth of Japan.”

SIDE NOTE: The Imperial date format is part of the traditional Japanese calendar. It counts years from when each new emperor takes the throne. For example, this year would be Reiwa 4 (, as displayed on a coin), since this is the fourth year since Emperor Akihito abdicated and his son Naruhito took the throne. 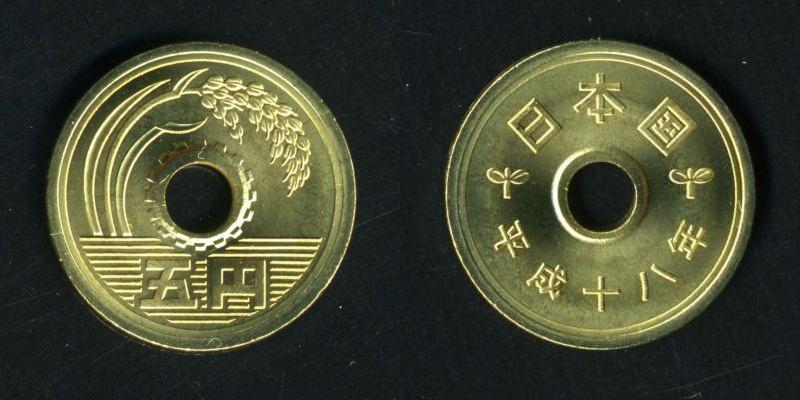 The 5-yen coin is the next denomination. There’s a bit more going on for this one, starting with the fact that it has a hole in the center of it! Depending on what country you come from, this may or may not be a big surprise, but in my country there’s no coin with any form of perforation, so this intrigued me. I digress. One side of the five-yen coin showcases the three major industries of post-war Japan; an ear of rice for agriculture, horizontal lines representing fishing, and a gear encircling the center hole for heavy industry. The value in kanji is also displayed.

On the other side, we again see the name of the country, along with the minting year, and two spring leaves to represent the birth of modern Japan as a democratic country after the war. On the whole, the 5-yen coin in its current iteration feels like a pictographic thesis on the aspirations of post-war Japan, which makes sense since it began minting in 1949. 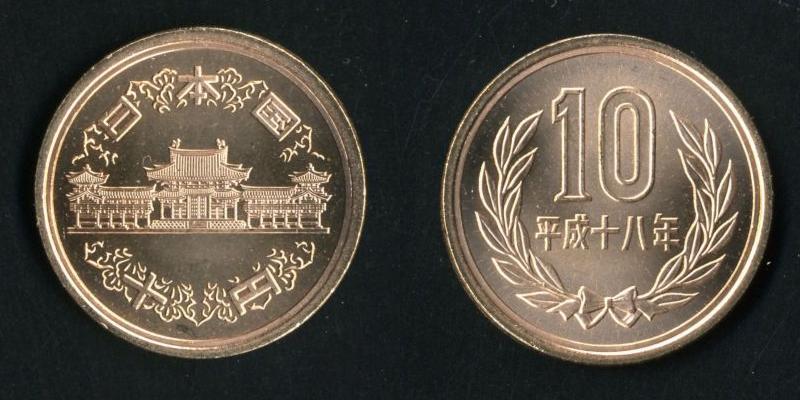 Moving on, the 10-yen coin (i.e. your vending machine workhorse) shows the Byodo-in temple in Kyoto, a UNESCO World Heritage-designated Buddhist holy site, along with the country’s name and value in kanji. On the other side, the value in Arabic numerals and minting year are both displayed, encircled by a wreath of evergreen tree branches. According to Ali Krusinski of Bryn Mawr College; “In Japanese culture, the pine tree is known to represent longevity, good fortune and steadfastness.” I conclude that this is derived from the fact that coniferous trees don’t shed leaves in the fall—seeming to never die through the unforgiving winter. 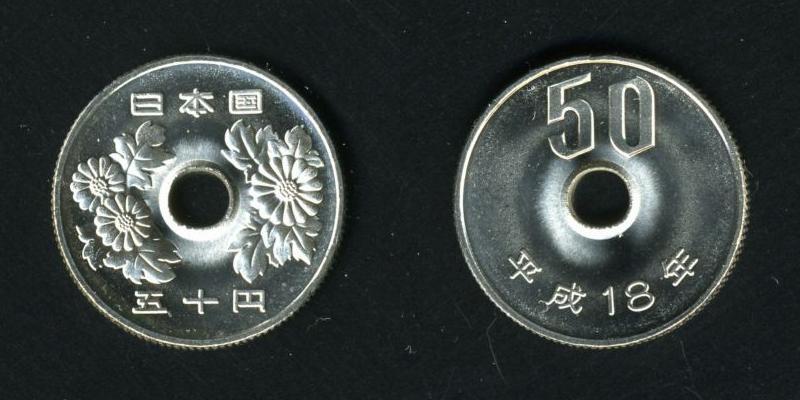 The 50-yen coin simplifies things a bit, having the value in Arabic digits and the mint year on one side, and the country’s name, value in kanji, and three chrysanthemums on the other. The symbolism of chrysanthemums in japan could fill an entire book, but in essence and most principally, they represent longevity (as long as they haven’t been planted by me). Cultural symbols related to flowers are always open to much interpretation, but the fact that chrysanthemums feature in both in politics and religion does clue one in on the admiration the modern Japanese have for them. If you know to look for the symbol of the flower, you will find it in many places. 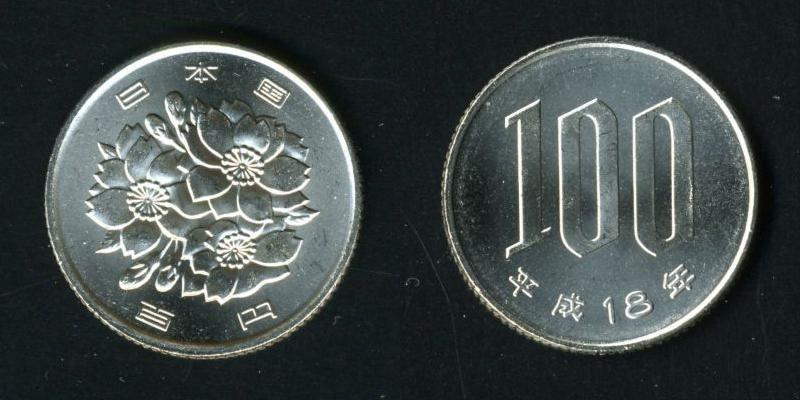 Keeping it simple yet again, the 100-yen coin has the value in Arabic digits and mint year on one side, with the country’s name, value in kanji and three cherry blossoms on the other. Cherry blossoms of course being an indelible icon of Japan, it stands to reason that it would adorn its most useful coin. 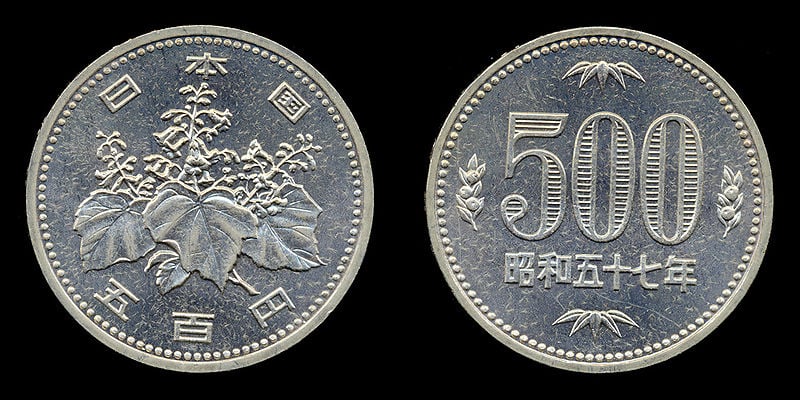 Finally, we reach the 500-yen coin. Infamous, depending on who you ask and whether or not they walk over storm drains while counting their pocket change. Though the 100-yen used to be the highest coin denomination, in 1982 the 500-yen coin replaced its equivalent banknote. On one side, the country’s name, value in kanji and a paulownia is showcased. The paulownia is said in Japanese folklore to harbor the arrival of a lucky phoenix, and is even seen on the government seal of Japan. The other side features bamboo and mandarin oranges (traditional Japanese symbols of good fortune), as well as the value in Arabic digits and the mint year. 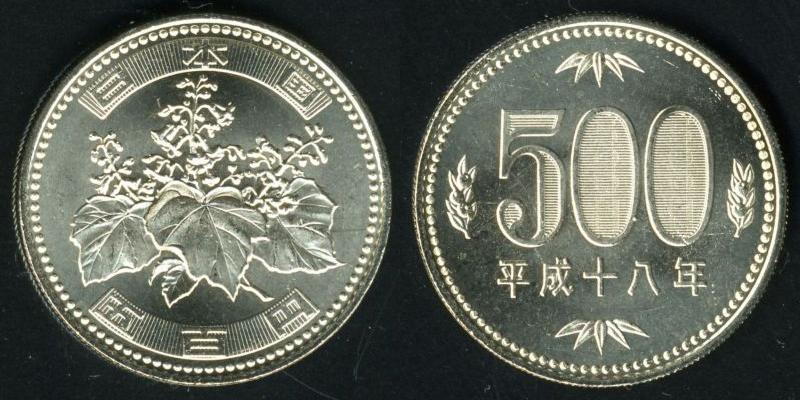 In 2021, the material of the 500-yen coin was controversially changed from purely nickel-brass to a nickel-brass, cupronickel and copper combination. The reason this change was met with some push-back is because it changed the weight of the coin, meaning that the new 500-yen would not work in any Japanese coin slot unless said coin slot was retrofitted for the new weight. I’m not equipped to discuss the political ramifications of this change, but I can tell you that it resulted in yours truly, news-illiterate Luddite that I am, standing mystified in front of a frozen dumpling vending machine as it spat out my 500-yen coin over and over again. As far as I can tell, the intention was to reduce the cost of minting while also making counterfeits more difficult to produce—but again, the discussion of this is somewhat outside the purview of this post.

The Unique Designs of the Japanese Coin

It’s no secret that Japan has had an intimate connection to the natural world since before recorded history, and Japanese coins reflect that. Sans the Byodo-in temple on the 10-yen and gear on the 5-yen, every symbol is a plant or reflection of nature. There is very little of the historic persons iconography that one might expect on currency, lacking the depiction of any head of state or cultural leader. That, instead, is left for their paper currency, which will be elaborated on in my next article on the subject.

In my opinion, I’ve always felt that the presence of people on all forms of currency is a more powerful representation of one’s culture. While the various flowers of Japan have interesting symbology (much of which is likely lost on a foreigner like me, sure), it’s still frustrating to analyze symbolism because it’s just so subjective. If I have sounded vague in parts of this article, it’s only through my goal of being as objective as possible while standing on the shifting sands of retrospective interpretation.

That said, I’m still a fan of Japanese currency, both from a practical and aesthetic sense. Hiding interpretive meaning in natural symbols is very Japanese I think. At the very least, a mandarin here and a temple there create enlightening conversations about Japan, so certainly there is something to congratulate the artists for on each design, even if the exact meaning is muddled a bit for an outsider.