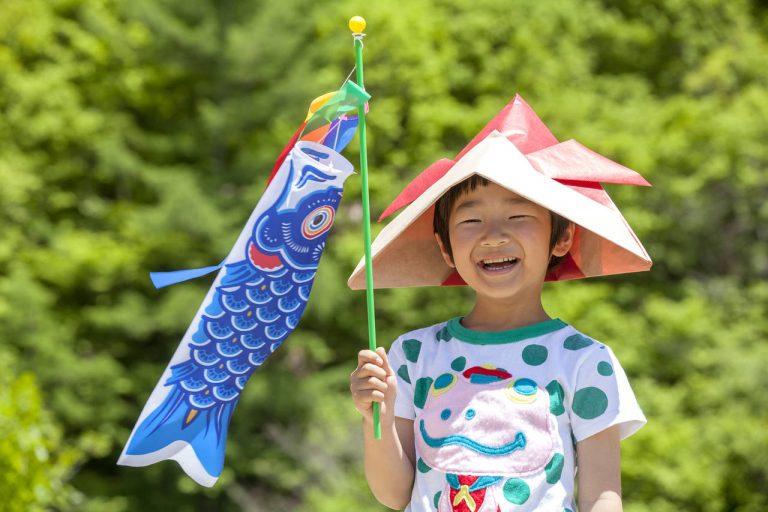 Children’s Day or Kodomo no Hi (こどもの日), is a day set aside for the kids. It’s celebrated annually on May 5 and is the last of the Golden Week holidays. It is also a holiday with ancient origins full of traditions. Whether you are celebrating the day with your children or you’re a favorite uncle or auntie to one, here are a few things to know about the national holiday.

A holiday with ancient origins

Before being known as Kodomo no Hi, the day was called Tango no Sekku (端午の節句) and was one of the five annual ceremonies called Gosekku held at the imperial court. Tango no Sekku was celebrated on the fifth day of the fifth moon of the Chinese or lunar calendar. When Japan switched to the Gregorian calendar, the holiday was moved to May 5.

Until 1948, the day was known as Boys’ Day or Feast of Banners and celebrated only boys and recognized fathers. It was the counterpart to Hinamatsuri or Girls Day held on March 3. While Boy’s Day was a national holiday, Hinamatsuri was not recognized as one. The name was eventually changed to Children’s Day. It included both boy and girl children and recognized mothers and fathers, upholding the family quality of unity and celebrating the growth and happiness of children.

To understand the holiday better, let us go back to the Nara and Heian periods (AD 710-794 and AD 794-1185). This was a time when Chinese traditions greatly influenced Japan’s culture. It is said that Gosekku (O-Shogatsu (January 1), Hinamatsuri (March 3), Tanabata (July 7), and Kiku Matsuri (September 9) along with Tango) came from China and sailed across the Sea of Japan alongside green tea and kanji.

However, Gosekku had a negative connotation in China and were known as unlucky days. The Nara and Heian courts decided to put a positive twist to the tradition through celebrations, including poetry readings and food offerings, to counteract the negative meaning behind the tradition.

In line with ancient origins, most of the modern-day rituals and symbolisms linked to Children’s Day can be traced to the Kamakura and Edo periods when the samurai class became prominent in Japan. What started as a women-only event, warriors turned Children’s Day traditions to celebrate the young male population’s growth and success. Manly activities such as horseback archery were organized to celebrate the holiday. From a female-only practice to a male-dominated one before transitioning to an all-inclusive event, the Children’s Day holiday experienced a couple of adjustments throughout history, including its core meaning from a negative to a positive one.

Although Japan has moved on to the modern era and samurais no longer exist, many of the traditions encompassing Children’s Day are continued. You have the carp streamers, shobu bath, kabuto helmets, the iris flower, to name a few.

The meaning of carp-shaped streamers

Perhaps the quickest way of noting that Children’s Day is near is when the koinobori (こいのぼり) or carp streamers begin popping up at stores and the streets. The long windsocks shaped like fish hung on a tall pole symbolize the Chinese legend where a carp was resilient enough to traverse up the Yellow River and leap into the Dragon Gate, thus transforming into a dragon and flying into heaven. The koinobori represent strength and determination that lead to success in life. These are the virtues that parents wish for their children. 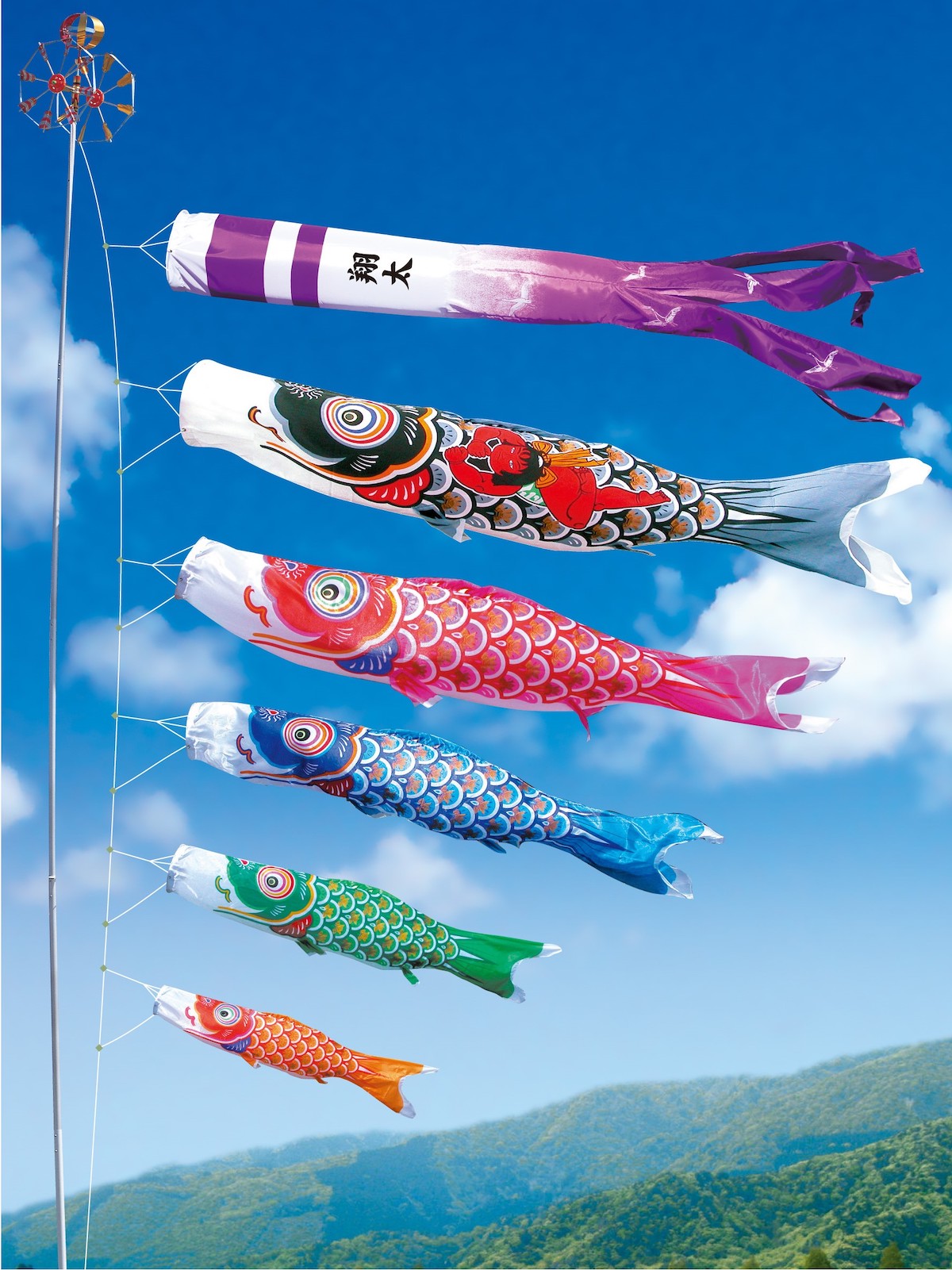 Traditionally, a large black carp is hung to represent the father, a red or pink one for the mother, followed by smaller streamers for each child in the household. Families with boys will often put up streamers in bolder and more vibrant colors. There are smaller carp streamers available for purchase to cater to those living in smaller apartments or houses. The miniature versions aren’t hoisted outside but serve as interior décor.

Have a kabuto helmet to stick to the theme 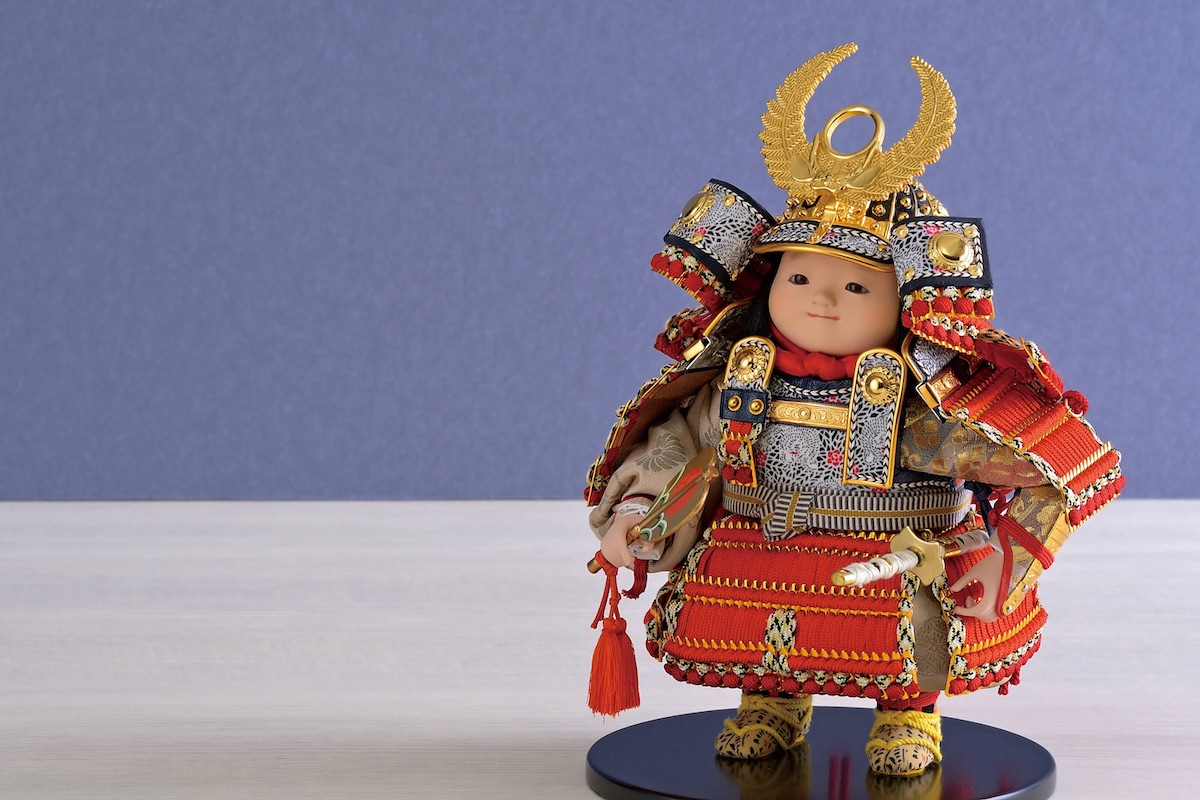 Another popular Children’s Day decoration set up inside family homes is the gogatsu ingyō (五月人形 or “May doll”). It is a miniature samurai warrior set showcasing intricate craftsmanship, from the armor and weapons to the base. As the entire setup can be bulky and take up a lot of space or quite expensive for the high-end versions, families opt to display instead a miniature samurai helmet called the kabuto (兜). They also make kabuto helmets out of origami and wear them on their heads. The kabuto helmet and May doll symbolize the wish of the community for its young boys to grow up strong and brave like the samurai.

Get acquainted with Kintaro

You might hear of the name Kintaro or the “Golden Boy” during Children’s Day as he embodies what parents hope their children to be. According to Japanese folklore, Kintaro, who later became known as Sakata no Kintoki, was a child with superhuman strength. It is said that Kintaro was conceived when a god impregnated his mother with a giant clap of thunder. Kintaro dolls are often gifted to children during the holiday.

Why Iris is important during this day

Another name for Children’s Day, in case its other names aren’t enough, is Shobu no Sekku, which means Iris Day. The name is linked to an ancient rice planting tradition. Back then, the first rice planting session of the year was a religious affair. Young bachelorettes would sleepover in huts covered with irises and mugwort. They would drink medicinal liquor as a way to purify themselves physically and spiritually before the rice planting activity. The success of their work directly affected the year’s harvest.

Iris and mugwort leaves are also believed to ward off bad luck and sickness. The pointy leaves of irises symbolize sharp samurai swords protecting the family. It was tradition to hang the plants on the roof’s edges as a protective measure.

The concept of Irises and shōbuyu baths continue

While young, unmarried women no longer plant the first batch of rice crops today, nor do families hang leaves on their roofs, people have continued the tradition of taking a shōbuyu or “iris bath.” The iris leaves are believed to contain medicinal properties, and you can see some public bathhouses offering iris baths on Children’s Day. Kids could even take them for free.

Decorations, legendary character, and iris baths aside, you also have a couple of traditional food served on Children’s Day. One is the Kashiwa-mochi (柏餅), which are soft rice cakes stuffed with sweet red bean paste and wrapped in oak leaves. The oak leaves symbolize the long-lasting health of the family that is passed down across generations. Oak leaves are known to delay their leaves falling, some even keeping their leaves during winter, thus representing the belief of continuing health for the family.

Another popular treat is the chimaki (ちまき), a long sweet sticky rice dumpling wrapped in bamboo leaves. You can often find these two treats at supermarkets during Children’s Day. The wrapping might be symbolic but remember that they only serve as decoration and should not be eaten. Here is a recipe for Kashiwa-mochi and chimaki if you want to try making the traditional treats.

Whether you plan on saying “yes” to the kids for 24 hours as it is their day or decorate the house with items filled with ancient tradition, Children’s Day, without a doubt, is a colorful and meaningful holiday that brings the Golden Week to close.