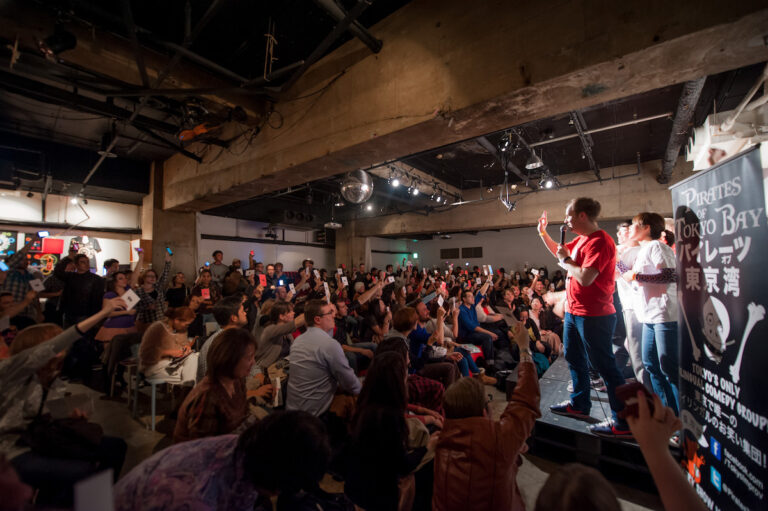 While some people move to Japan on a whim, and others to learn the language, there are others still who come with a specific goal in mind. For Mike Staffa, that goal was to understand and try out comedy in a non-English speaking environment.

But comedy isn’t exactly first on the list for visa applications, so here Mike will take us through his journey to founding his very own bilingual comedy improvisation group, the Pirates of Tokyo Bay.

A Man with a Plan 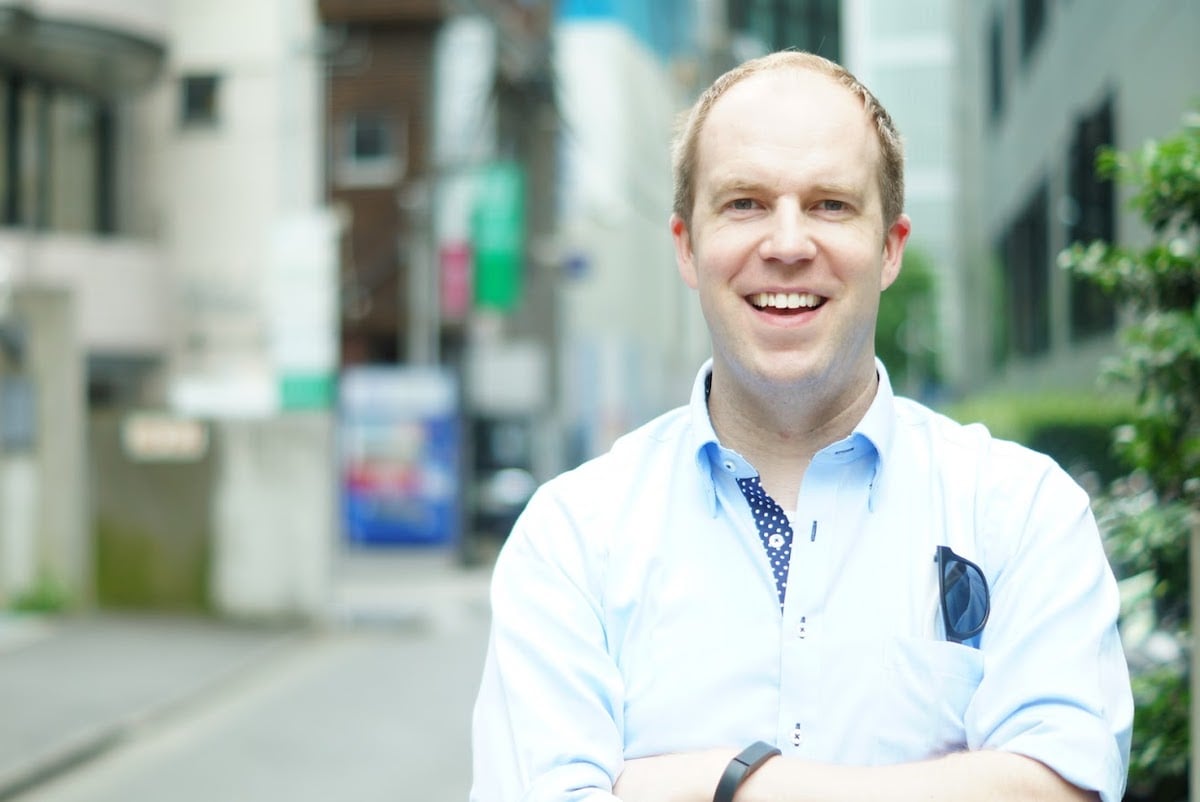 Mike is originally from Minnesota in the U.S., where he had dreams of building and running his own comedy theater. He told me, “I thought it would be amazing to both perform and run the business.”

With that in mind, fresh out of university, he looked into federal grants to promote the arts, but quickly realized getting that funding would be no easy feat without something to set him apart. By graduation, Mike had already performed improv comedy across the U.S. and Australia, so he wanted to challenge himself by trying out comedy in another language. And what better way to set yourself apart than by heading to Japan?

Comedy buffs out there will know that the comedy hub of Japan is Osaka. It’s where Yoshimoto Kogyo Co., Ltd., a well-known entertainment conglomerate, is based, and the area has gained a name for itself for its comedy, both traditional and modern. So, naturally, that’s where Mike intended to go.

Wishing a comedian’s visa existed, Mike made his way to Osaka the only way he knew how – through a job with an Eikaiwa (English conversation school).

Mike originally got into comedy while at university. His friends prompted him to audition for the university improv group, which was a challenge to get into, and didn’t let him in until his second year of auditions.

From there, something clicked, and Mike has been into comedy ever since. With his plan to conquer comedy in another language in motion, Mike set up an improv group in Osaka called the “Pirates of the Dotombori”, using the famous Dotombori River as their namesake.

Five years later, with his move to Tokyo, he started up the “Pirates of Tokyo Bay” in 2010, which has grown to include international tours, corporate training events and even a TED Talk. 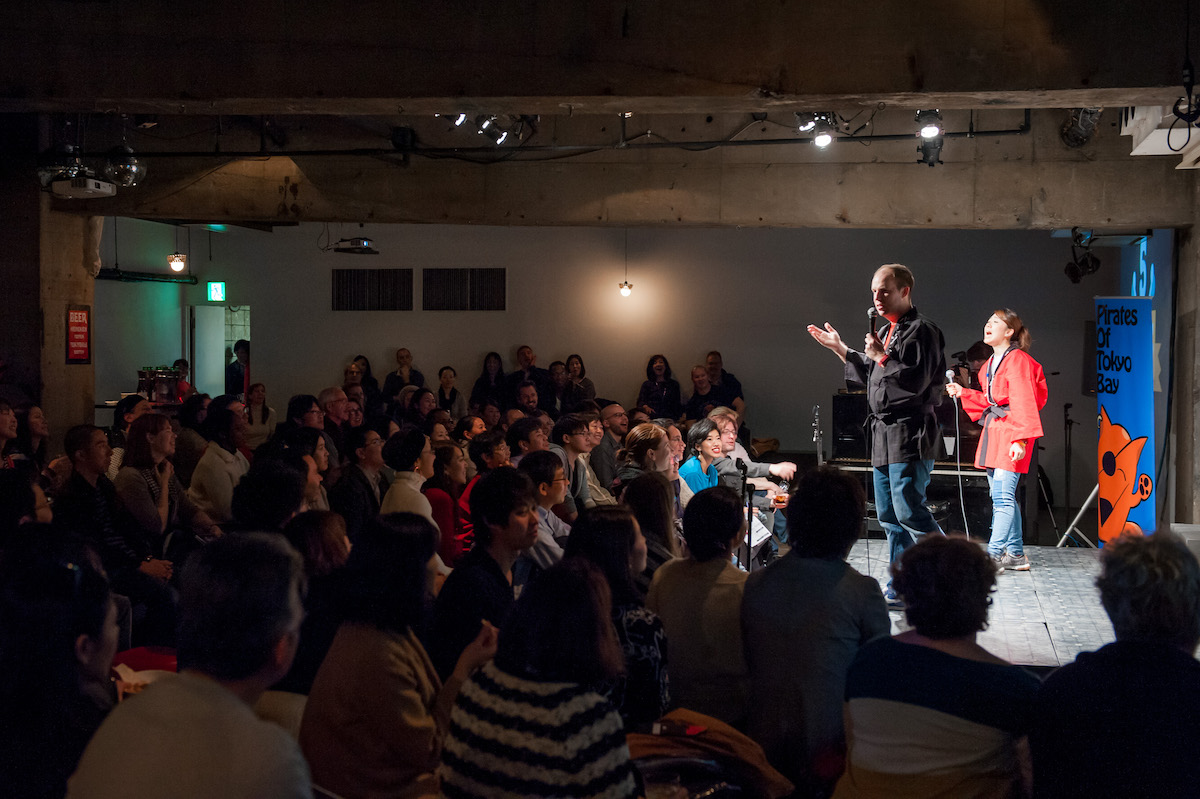 Of course, the whole reason Mike moved to Japan in the first place was to challenge himself with comedy in another language, and with that comes various language barriers and cultural differences. With the stereotypical idea of Japanese people being “shy”, and improv relying heavily on audience participation, there were bound to be some hurdles.

Mike told me that audience members are less likely to shout out a suggestion in case it’s a bad one: “If we took their suggestion and did a scene and it was not very funny, they might feel bad for giving that suggestion.” So, to get around that issue, the Pirates comedy group has to use a different tactic to what they might have used in the U.S. Instead of asking open-ended questions to the general audience, they single out audience members and ask easy-to-answer, specific questions like “What was your favorite subject in school?” This eliminates the pressure to speak up in the crowd with a funny answer, while still getting the audience engaged.

In terms of the comedy itself, although the Pirates of Tokyo Bay are a bilingual comedy group, performing their shows in a mix of Japanese and English, they do not expect their audience members to be bilingual. The group makes sure to frequently alternate between English and Japanese, or even turn to outright pantomime. Mike says that “Japan seems to be a bit more physical and theatrical in their comedy style,” as opposed to the more heavily pun-based comedy in the U.S., but perhaps that’s a good thing with all these language barriers!

But when it comes to audience reaction, more so than the differences between Japan and the West, Mike has found that the differences between Japan’s own east and west have the most notable differences: “I’d argue that in Osaka, audiences go to our show wanting to laugh. They are ready. In Tokyo, I sometimes feel audiences are more curious to see IF they will laugh at our show.” Where Osakans are ready to go, Tokyoites take a bit of warming up to be convinced. 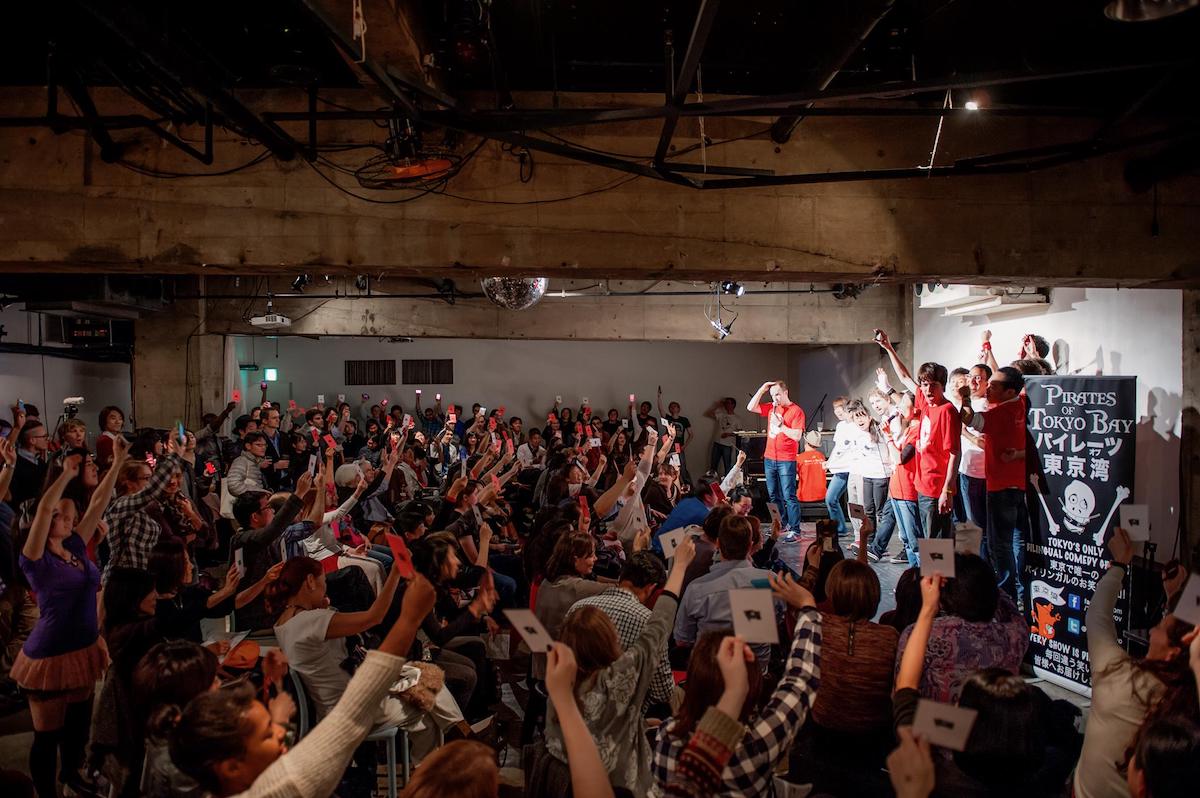 Getting into the World of Comedy

Although Mike has started two comedy groups in Japan, he continues to do so on the side of his day job in tech. As well as their regular shows, Mike is currently putting more energy into growing the business such as the recently launched improv “school” as well as running corporate team building events. But that perhaps gives you an idea of the situation – improv comedy is not going to instantly be your only source of income, and requires work and reputation to keep things going.

If you do want to get into the comedy scene though, Mike recommends getting involved in the community and going to as many shows as you can: “Once you find a group or style you like, then keep checking out and supporting other groups and styles. It isn’t easy to do comedy (either in your native language or in a second language) and especially with COVID, groups are struggling to find audiences. So my advice is to get into the community and get involved.”

Once you’re in, you’ll likely have a fairly irregular schedule, decided by show dates and rehearsals, but it’s not like you’re in the comedy scene for that regular 9-5 anyway!

Finally, the Tokyo Bay Pirates hold auditions every once in a while, so I asked what makes a good candidate for their group.

First off, they look for skills that might fill a certain niche, for example if a talented singer has just left the group. Next, they want to make sure the candidate is willing to learn and grow with them. Just because a candidate has done improv before doesn’t mean they’re guaranteed a place, as they’ve got to show flexibility. Finally, Mike says candidates have to pass the “bus test”. Elaborating on their unique auditioning procedure, Mike says “Auditions are about letting people into our group.” And to let someone into the group, they need to get on with everyone, and generally be a good person, especially seeing as they’ll be spending so much time together from there on: “If we feel we could sit on a bus next to someone for a long time, then that is a good indicator to us that the person auditioning is a good person.”

So, while the comedy scene in Japan is certainly not a quick path to fame and fortune, if you’re anything like Mike Staffa, it’s a sure-fire way to make new connections and have some serious fun along the way. And who knows, maybe one day you’ll be eligible to get funding for your very own theater. 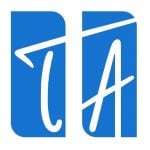