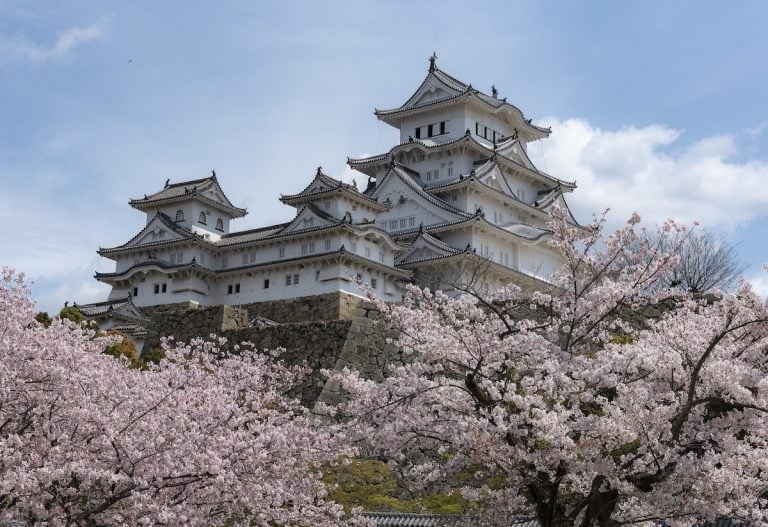 Japanese castles are must-see monuments when visiting Japan. Contemplating them will make you appreciate the originality and complexity of each one of them and be able to know the history of the Japanese country. Unlike European castles, Japanese castles were not built to be used as dwellings, but were mostly fortifications.

The history of Japanese castle dates back to the Yayoi period (10th century BC). The Japanese began to build moats to protect themselves from animals. When conflicts between people began, they built the walls. We can see a reconstruction of these settlements in the Yoshinogari ruins, located in Saga prefecture.

In 66, after the Japanese defeat by the Tang dynasty at the Battle of Hakusukinoe, several fortifications began to be built on the coast and in the mountains. From the 12th century, the lords and vassals of the shogunate began to develop their activity around the castles. During the Sengoku period (late 15th and 16th centuries), the vassals or lords of the Shogun lived in their houses at the foot of the mountain in times of peace. In times of war, they shut themselves up in their castles, usually located at the top of the mountain. At this time the towns called Jokamachi (“village at the foot of the castle”) appeared, built to supply the castles. 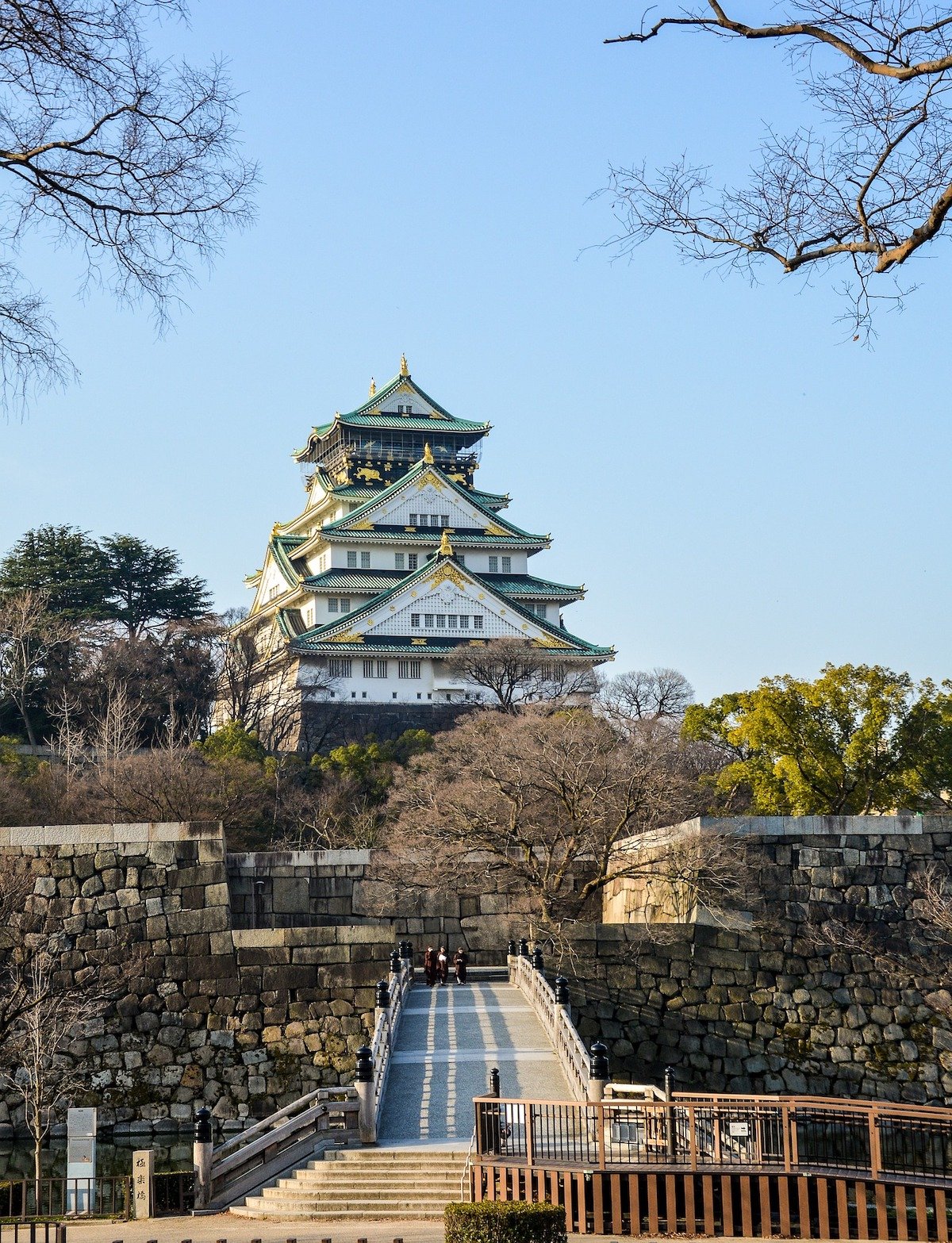 Firearms were introduced to Japan in 1543, changing the way of warfare forever. In 1576, Oda Nobunaga had the Azuchi-jo Castle built, considered the first modern castle in Japanese history. These castles were no longer solely defensive structures, but became the residences of the lords and centers of economic and political activity. For this reason, they stopped being located in the mountains. Modern castles were raised as a symbol of stately power, thus the stone walls and the Tenshu tower being characteristic of these. After the unification of Japan carried out by the Shogun Tokugawa Ieyasu in the early 17th century, the lords were ordered to build modern castles throughout Japan, reaching as many as 25,000 castles. However, in 1615, the second Shogun of the Tokugawa Dynasty ordered to keep a single castle per state to reduce the power and wealth of the lords. In 1873, after the Meiji Restoration (that is, the transfer of power from the shogun to the emperor), the emperor ordered the abolition of the power of the castles in order to modernize the country. For the emperor, the castle was a symbol of ancient Japan.

After the imperial edict on the castles, many of them were abandoned, and when Japan entered WWII, the castles that managed to survive were taken over by the Japanese army to store and protect weapons. Due to this sad fate, Japanese castles were the target of American bombing and castles that were close to large cities were destroyed.

Many castles were rebuilt after WWII, but often with modern materials such as concrete. Today there are only 12 castles that are considered original. Himeji Castle, in Hyogo prefecture, stands out for being declared a World Heritage Site by UNESCO in 1993.

The main structure is the tenshukaku that consists of two parts: a stone base and a main wooden building (donjon) on it. The donjon consists of several floors and a watchtower. Due to the arson attacks, the wood was covered in plaster. Large areas of land were used for the construction of the complex, as the idea was that access would be difficult in case of siege, and cities were built around it. An example is the Osaka Castle (1583), which covers an area of one million square meters.

In order to defend against sieges, on some occasions the castle was located in the center of the terrain. As a precautionary measure, they could not be accessed in a straight line. For example, in Himeji Castle the distance between the hishinomon gate and the main entrance of the castle is hundred meters. However, to get there you have to advance along a complex route called nawabari, a kind of labyrinth with six more doors that make the distance triple, reaching more than three hundred meters. Along the way there were thousands of sama holes (loopholes) from which the attackers were shot with bows and flint or match rifles. 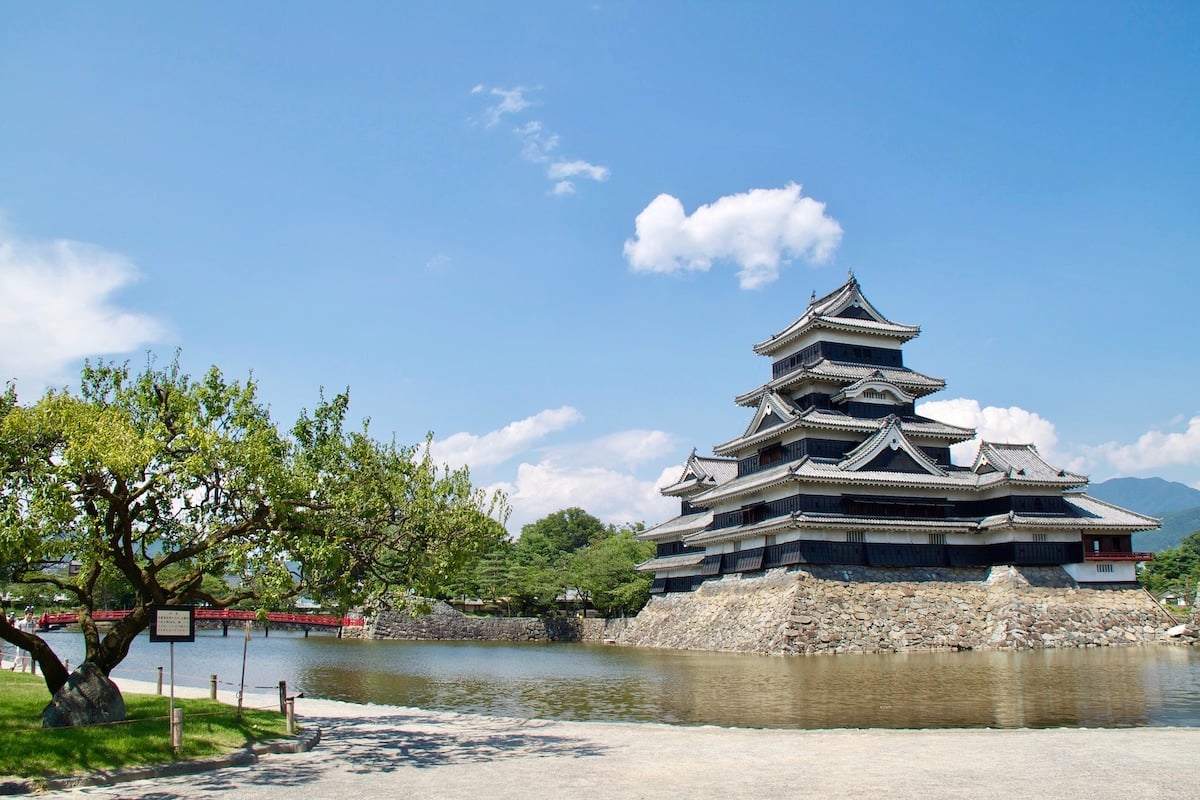 Japanese castles, which began as fortresses in the mountains, later became buildings on hills of flat land and, ultimately, were erected on plains. In the case of mountainous areas, natural terrain conditions were exploited, for example in the castles of Takatori, Takeda and Bicchu Matsuyama, in Nara, Hyogo and Okayama prefectures respectively.
As for the castles that stood on hills of flat terrain, we can mention the Azuchi, built by Oda Nobunaga in Shiga prefecture, and those of Himeji, Hikone and Kumamoto, in the Hyogo, Shiga and Kumamoto prefectures, respectively.

Finally, Osaka, Nagoya and Matsumoto castles, located in Osaka, Aichi and Nagano prefectures, respectively, are clear examples of construction on plains. The one in Matsumoto stands out for the large extension of the complex that houses it, as well as for its six-story tower with a five-storey roof. It is believed to have been built around 1593 or 1594.

On the other hand, there are “water” castles, that is, built in the vicinity of seas, rivers or lakes with the aim of taking advantage of their water for the moat, among other purposes. Matsuyama, Imabari and Nakatsu castles, in Kagawa, Ehime and Oita prefectures, respectively, fall into this category.

Castles are for the Japanese a pride that allows them to share with the world what the life of their ancestors was like, as well as the artistic and architectural advances of the time of their construction and the careful care that they have taken in their reconstruction.