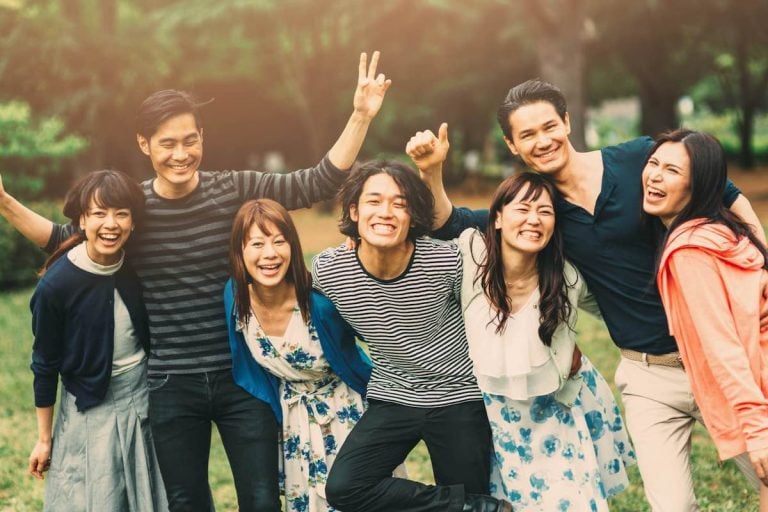 One of the biggest fears people have when thinking about living in Japan is learning the Japanese language. Many of you are probably planning to live in Japan to study Japanese but do not know what the first years of adaptation in Japan would be like without Japanese.

All Japanese thought starts from a system called “uchi soto”. Which translates to, 内 (uchi – inside) and 外 (soto – outside).

Although this differentiation can be found in many other countries, it is especially strong in Japan. In a Western country it is difficult to enter a social group being the new one, but that integration always ends up taking place. In Japan it is not impossible but more complicated than in a western country.

But where does this way of thinking come from?

Although we have a whole article talking about the Japanese love of group culture, to make a long story short, in Japan individual opinions have never been of much value, since all family members had to consider family harmony first and foremost (which is still present), which gave even more importance to group thinking. Therefore, keeping the harmony within the group became so important in Japanese society that this determined the way Japanese people behave, speak and relate to people that does not belong to the same group, following thus the strict guidelines of the social codes established by society.

This extended to all kinds of situations and relationships in Japan. Of course, this way of thinking is gradual and it depends on the person you are talking to. There are several levels of uchi soto, where at the end the foreigners would be.

Making Japanese friends is not that difficult

Even though it is difficult to integrate as a foreigner, it does not mean that they are going to treat you badly because you are from another country. On the contrary, they may even treat you better than the Japanese themselves, and they will treat you better than your Western friends do. Remember that the Japanese are extremely educated people and that they take care to maintain peace and harmony in their social circle. Of course, if you get a Japanese friend, it will be a friend that will never let you down.

It is said that the Japanese do not know how to speak English well, but it actually depends on the person, their personality and their circumstances. There are many Japanese people who are passionate about languages and travel, constantly taking language classes, attending international events, traveling to different countries, and love to taste the local food of each country. Especially young people are becoming more interested in foreign languages and cultures, and English is being taught earlier and earlier in schools, so some young Japanese know at least basic phrases in English.

Japanese people are usually very shy and unconfident about their level of English. Also, as we have already mentioned, since the Japanese try to maintain a certain harmony in their social environment, many times the reason why they may be more reticent when talking to foreigners is because they do not know how to address them without being disrespectful. Therefore, making them feel safe and maintaining a cordial, friendly and understanding environment will greatly facilitate the conversation. You can start by talking about basic topics to break the ice, such as the food or the culture of your country or Japan. It will also help if you try to learn at least the most basic phrases in Japanese. They will greatly appreciate the effort you put into trying to speak their language and showing respect for their culture and will encourage them to speak English as well. Thus, the effort would be reciprocal. Going to places that the Japanese frequent, such as bars or events of any kind, will help you meet people and break the language barrier.

How to make Japanese friends?

There are many ways to make Japanese friends in Japan. Here we give you some of the different ways you have to do it. Therefore, take note and think about how you can adapt them to your personality and the type of person you want to interact and make friends with.

Although it may seem very difficult, if you go with a good attitude and show effort and respect for others, making Japanese friends will be much easier than you think.