In many if not most major cities across the globe there is a Chinatown, ranging from sprawling and grand to a modest row of shops built by and for the local Chinese community. The most historically notable Japanese Chinatowns are in Yokohama, Kobe, and Nagasaki, with many others growing in cities like Tokyo and Osaka. If you’re looking for a vibrant area offering steaming meat buns and tea shops in a historic neighborhood, Yokohama’s Chinatown is absolutely worth the visit.

When the Yokohama port opened in the mid-1800s after the era of seclusion, foreigners from all over the world came to Yokohama for trade. Foreign communities cropped up around the city, with many of those buildings still existing today. The city has been incredibly significant in the modern era, such as being home to Japan’s first railway station and first city to install gas-powered street lamps. There has been heavy development and investment in the area, with the erection of numerous skyscrapers and contemporary buildings in the Mintato Mirai 21 business district as well as many major companies choosing Yokohama to host their headquarters. It’s an immensely modern city, maybe the most in Japan, bound together by an equally impressive history. 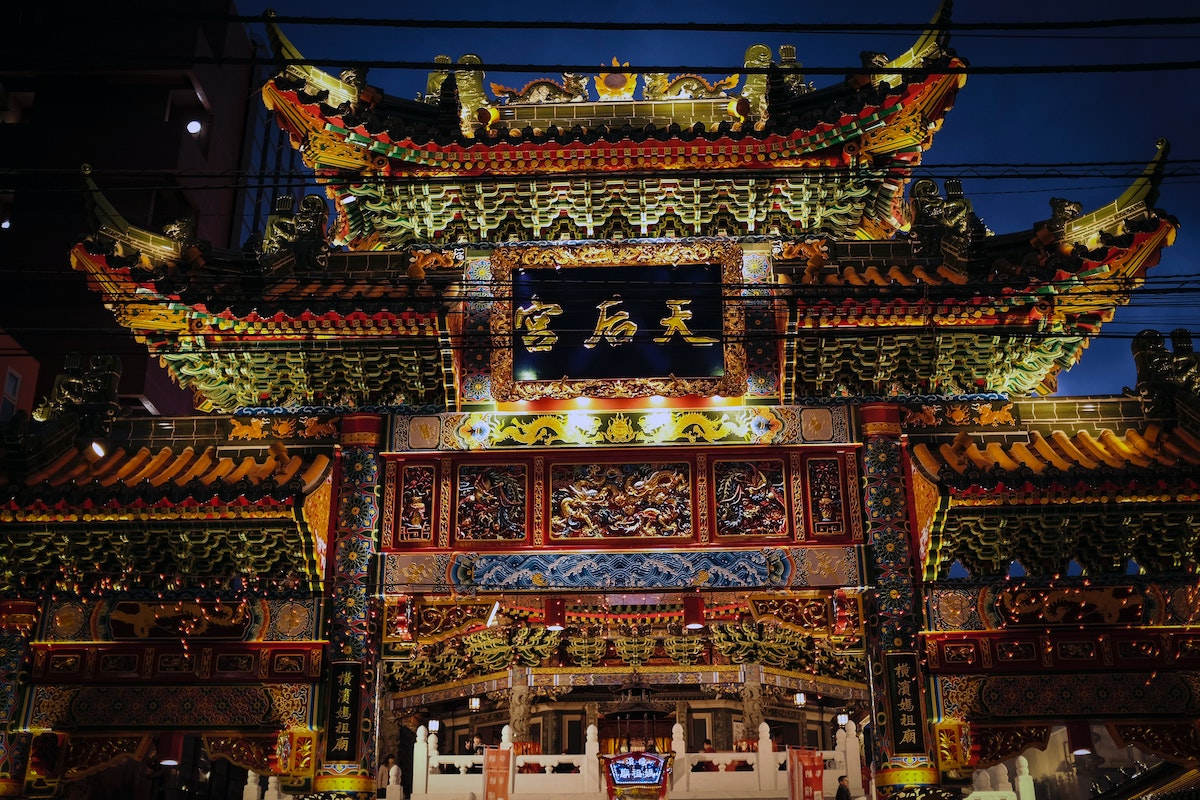 Motomachi-Chūkagai, the Chinatown area of Yokohama and name of the station positioned just outside of the area’s main gate, is beside Minato Mirai 21. It exists in kitschy opulence between the glittering business sector, residential neighborhoods, and historical buildings from the 1800 and 1900s, making the area a major tourist destination. Spanning multiple city blocks, each street entering the area is marked by elaborately decorated arches announcing the Chinatown boundaries. This theme is persistent throughout the neighborhood, with it seeming as if each shop is competing to get tourists’ attention with dramatic exteriors.

Very few Chinese people live in Chinatown. In fact, this “Chinatown” echoes little of its past as a haven for the Chinese community in Japan, and is more of a Chinese-themed town painted by the Japanese imagination. Some Chinese people integrated into Japanese society and many returned to China after the area suffered from the massive 1923 Great Kantō earthquake among other reasons why the Chinese population is very low here. This is a common trend among “Chinatowns” in Japan – rather than be areas that were primarily made by and for the local Chinese, Japanese Chinatowns often reconfigure these areas into tourist destinations as the Chinese populations move to other neighborhoods.

Shops selling mooncakes, bubble tea, and restaurants offering a variety of Chinese cuisines (generally refitted to suit Japanese tastes) are abundant. There are shops offering all-you-can-eat dim sum, Taiwanese fried chicken, and steamed buns. Aside from food, there are numerous palm-reading stalls and souvenir shops with zodiac-themed products in red and gold. There is even a Chinese-styled temple, Kanteibyō, dedicated to Guan Yu, who is worshiped to bring financial and business prosperity.

This Chinatown will no doubt to bring a colorful splash to your adventure around Yokohama, and is best known for its food. There are tight and hidden alleyways to explore with even more restaurants, one of which having Taiwanese flags visible in all directions. There are even a few small shops selling basic Chinese groceries and snacks. Though it is not the most sizable district, travelers will be overwhelmed by the sites and options, which will certainly inspire future food tours and excursions. Though the Yokohama Chinatown has be repurposed for Japanese enjoyment, that does not mean there is no authentic Chinese presence. Many shop owners and staff are either ethnically Chinese or half Chinese, and there are even two Chinese schools in the area that offer education in Mandarin for students from elementary to high school. However, unlike Chinatowns outside of Japan, these Chinese workers commute into Chinatown from other neighborhoods. Chinese speaking doctors, authentic Chinese restaurants, and other lifestyle services catered to Chinese people in Yokohama are centered in the adjacent Kannai and Ishikawachō stations. Tokyo’s Ikebukuro, a very short ride away from Yokohama, is another area bursting with authentic Chinese food that is relatively unknown to tourists.

The Yokohama Chinatown is a must-visit because of its historical significance, proximity to other major sites in the area, and the notable presence it has in Japan. Rather than understanding a bit about Chinese culture or Chinese people in Japan, a trip through this area will allow visitors to get a sense for what local sites are widely enjoyed and patronized by Japanese travelers. Therefore, this dynamic spot should be on the list for anyone who wants to get better acquainted with the Kantō region.

There are many ways to access the Chinatown. Like most places in Japan, using one of the rail services is the most convenient. In 2004, the Minato Mirai Line was opened by the city of Yokohama to help promote the business district, and the Chinatown area can be easily reached from the Motomachi-Chūkagai Station or Nihon-Ōdori Station. If you are on the JR Line, the area can be accessed by the previously mentioned Ishikawachō Station or Kannai Station.