If you’ve never tried sake from Tohoku, you’re missing out on one of the oldest and richest traditions of Japan.

At the start of November I was lucky enough to be invited to a sake tasting with JNTO and some incredible experts on the art and science of sake.

If you’re not aware, sake is a fermented alcohol drink that is wildly popular all over Japan. There are around 1150 breweries all over the country, and they make sake with a host of different methods, but all involve rice and a kind of fungus named “kōji”, which has enzymes that digest the starch in rice to create alcohol.

What I wasn’t aware of, though, was the HUGE difference between sakes made in the Tohoku region and those made in the south western regions of Japan. Because of the climate in the North, the traditional methods of fermenting result in a very clean, crisp and sharp flavour compared to the broader and richer flavours of sake produced in the south. For a lot of Japanese foods, like sashimi, miso and white meats, the sweet and clean taste of Tohoku sake pairs beautifully.

Why does Tohoku Sake win all the awards?

While the most important region of Japan for sake is historically Hyogo prefecture, recently Tohoku has been coming away with a disproportionate number of the awards for sake brewing. While a lot of breweries will use distilled alcohol as part of their process, a much higher proportion of Tohoku sakes use the traditional methods with no additives – this allows them to put the coveted label Junmai on the bottle.

The type of rice used is also very important. Normal table rice cannot be used for sake – well, that’s not quite true. Normal rice can be used but it would taste awful. Instead a special kind of rice for sake is used, and this “sake rice” is maybe 30% larger than table rice, and has very little protein and fat content. You wouldn’t want to eat this rice, it would taste bland and boring, but for sake it is perfect as it contributes a lot of sweetness from the higher starch content.

A lot of Tohoku breweries also focus on the specific types of rice grown in their region. Tohoku is sometimes called the rice basket of Japan, and travelling through the beautiful region is something very different from our usual vision of Japan with the big city lights of Tokyo or the castles of Osaka or Hyogo. When rice fields stretch as far as the eye can see, you can start to understand why Tohoku people got a little obsessed with getting the most out of the rice they grow. One bottle we talked about at the JNTO seminar, the Nanbu Bijin “Tokubetsu Junmai”, only uses rice grown within a 10km radius, called “Ginotome”, and not substituting rice from other areas of Japan, so as to maintain flavour. 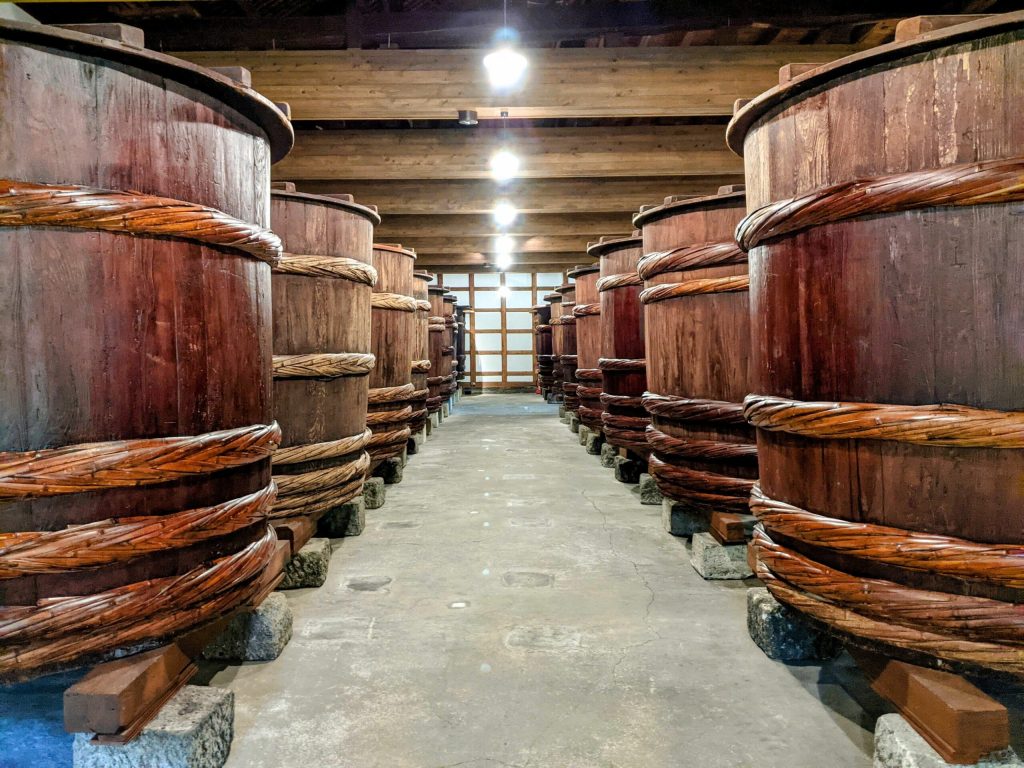 Sake is not really like wine, beer or spirits, but somewhere in the middle. It is fermented like a beer, but not carbonated like one. In flavour it is closer to wine but differs greatly in the production method. Apart from the transparent colour it has very little in common with distilled alcohols like gin or vodka. Sake is a truly unique alcohol.

The rice is obviously the biggest effect, and in production the rice, kōji and water are added in batches over the first few days, and then left to ferment for 18 to 32 days before being pressed, filtered, blended and bottled. The flavour will change greatly depending on how much the rice is milled. One of the bottles we tasted was Toko Junmai Daiginjo Yamadanishiki. This means that it is not only made in the traditional way without adding any distilled alcohol or other additives, but also the rice is milled very finely to bring out some very unique flavours.

Sake grown in the south closer to Kyoto, Hyogo, or Shikoku has a much more broad flavour profile because of the climate. The fermenting process of the sake rice goes much faster because of the greater heat in the south. These days of course there can be climate controls, but the cultural and brewing history isn’t there. Brewers in the north use the natural cool climate to brew some incredibly delicious sake, and this hasn’t really been replicated elsewhere even with modern technology.

In my first year in Japan I tasted a lot of sake, but never really thought about it in the same way as I thought about wine, or my other big passion, coffee. One time in Fukuoka with my friends, I drank several bottles of cheap sake from a convenience store, and the surprisingly high alcohol content (it doesn’t taste as strong as it is) floored me. I have rarely drunk sake since then, but experiencing the Toku and Amanoto “Heaven’s door” sake made me reconsider drinking sake (in limited amounts, not by the bottle).

If you get a chance, you might want to go further north than Tokyo and check out Tohoku. With old L-shaped buildings (with the little fire pit) and forests of red oak that were wiped out in the rest of the country, it really is a unique place to see. The south of the country is well explored, but a lot of the north is really completely unknown by most foreigners and offers a bit more of a window into how things used to be like in Japan.