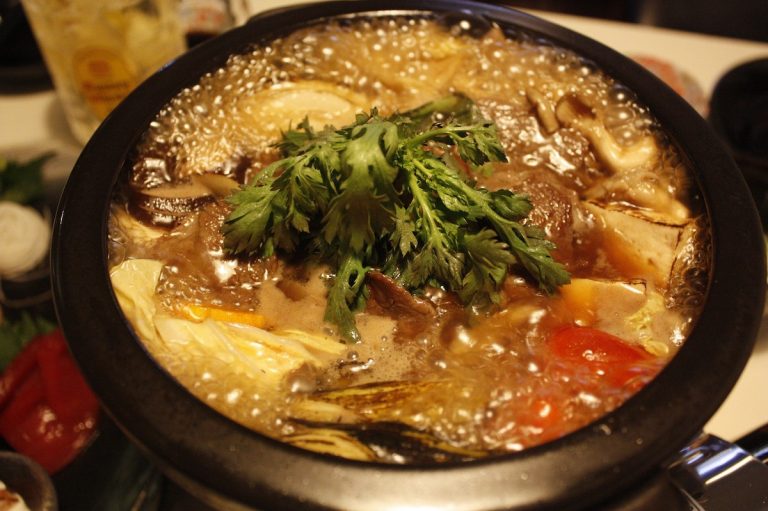 Japan is a country especially proud of its four distinct seasons. So much so that seasonality of food is especially important. If you are lucky enough to be in Japan during the colder months, be sure to treat yourself to these winter delights.

Nabe is firm favorite with Japanese people at wintertime! Nabe (or nabemono) is a staple dish which consists of a variety of ingredients (such as meat, fish and vegetables) cooked in a stew. Nabe has a warm, traditional feel as it is usually served in an iron or clay pot. As a typically healthy Japanese food, it is also low in calories!
Nabe is a great for family gatherings, as it can be eaten as a group. Friends and family can eat communally, by picking their favorite raw ingredients separately and then dishing out their portions of the soup from the main pot.

There are many varieties of nabe available to suit all tastes. One of the most popular styles is sukiyaki. Thinly sliced meat, tofu and vegetables are simmered in a simple ‘warishita’ soup. Once cooked, each ingredient is separately dipped in bowl of raw egg and eaten. Sukiyaki is a fun eating experience and can help you develop a full appreciation of the various flavors.

My personal favorite nabe is shabu-shabu. Similar to sukiyaki, you can dip meat, tofu or vegetables into the broth and cook to your own taste. However, shabu shabu is served with an array of dipping sauces, rather than just an egg mixture. Also, I like saying ‘shabu shabu’. It is an onomatopoeic way of saying ‘swish swish’ in Japanese. It’s fun to say. Sometimes called ‘fish cake stew’ in the west, Oden is a traditional kind of Japanese hot pot. It usually contains daikon (radish), renkon (lotus root) and a mix of fishcakes swimming in a broth of soy flavored dashi.

This dish can turn the noses of foreigners in Japan. Maybe not surprising considering the fishy scent and strange lumps of unfamiliar roots vegetables and fish cakes. But Oden has been a traditional winter staple in Japan since the Edo period. Your bravery will be rewarded if you try it. Oden is rich in savory flavor and has a comforting warmth. There are also different varieties in different regions. For example, oden in Nagoya has a miso soup base. In Kansai, oden has a dark beef base soup base.

Oden was originally sold in food stalls and carts, especially at festivals in the Edo era. Now you can pick up a warming bowl at certain convenience store and specialized restaurants.

This warm porridge is the perfect meal for when you are feeling sick. Okayu is a hot dish that can help you survice the cold winter in Japan. It’s simplicity and re-assuring smoothness is gentle on your stomach and easy to digest. Zosui is made from soft, thick cooked rice and okayu can be made with other cereals, such as wheat or buckwheat. Additional ingredients can be added to your personal favorite recipe. Extra meat and seasonal vegetables help make this dish especially nutritious to help banish winter colds and illnesses.

If you are used to the copper/ orange sweet potatoes from the US, sweet potatoes in Japan can come as a shock! The bright contrast of the yellow flesh against purple skin might look strange at first. But I endure you to try this delicacy in all its various forms! In cold temperatures, this hot baked sweet potato is an especially delicious winter treat.

Yakiimo is also a kind of Japanese superfood. It is full of vitamins and antioxidants, so its ideal for boosting your immune system in the winter months!

You can buy freshly baked yakiimo from street vendors, usually in their own food van, in many cities across Japan. If want to try them in a more accessible place, some supermarkets offer little yakiimo stands. These are not quite as authentic, but definitely cheaper, starting from ¥100.

Note: If you have fallen in love with this flavor, try sweet potato ice cream in Kawagoe this summer! You won’t be disappointed. 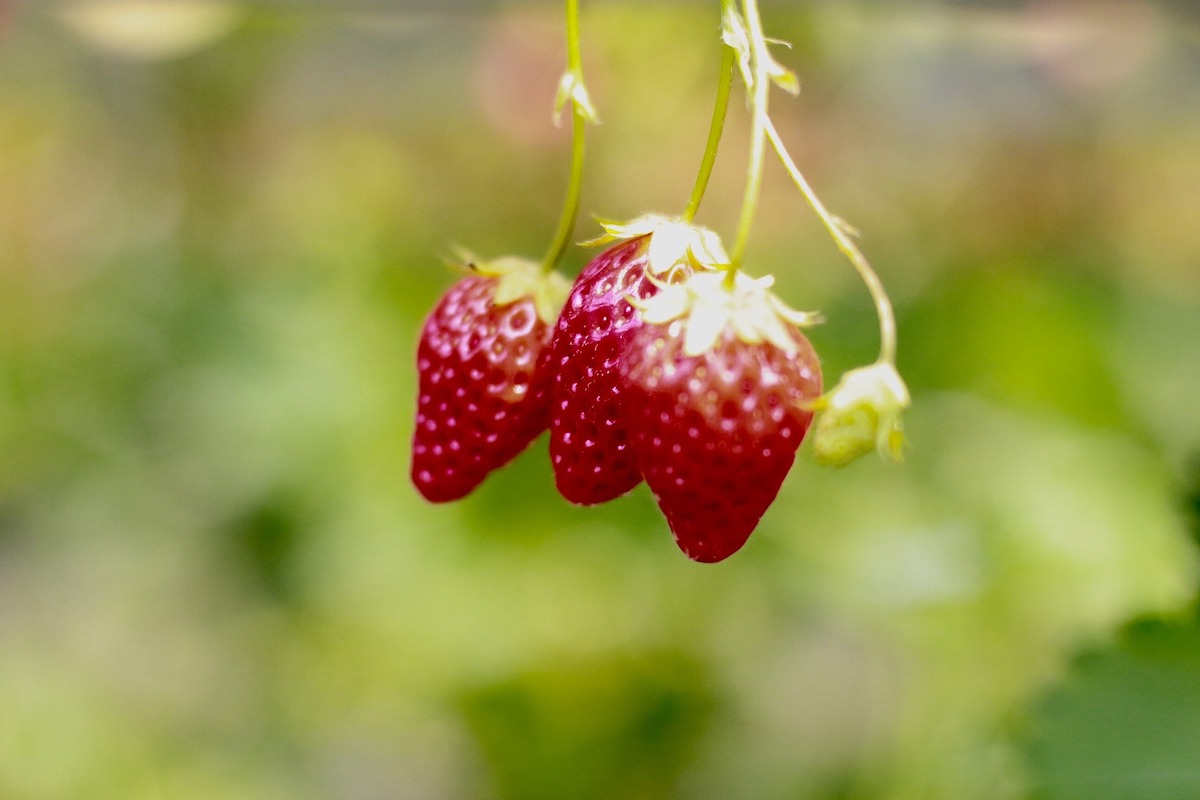 Normally conserved a summer fruit, strawberries really come into their prime in Japanese winter. They are grown above the soil in special vinyl greenhouses. This specialized way of farming means strawberries are available in Japan from December.

So much so, that strawberries are synonymous with Christmas. Unlike the heavy, dried fruit cakes of the western world, Japanese Christmas cakes are usually strawberry shortcakes. I much prefer these light, white fluffy treats topped with cream and luscious strawberries!

Strawberries are a big deal in Japan. Many producers grow their own variety with lovely romantic names. For example, ‘Tochigi Maiden’, ‘Beautiful Princess’ and ‘Scent of first love’ from Miyoshi Agritech Co. But be prepared to pay the price for these perfectly cultivated fruits. An average pack from a supermarket will cost about ¥400 – ¥600. ‘Designer’ strawberries can cost ¥1000 – per individual strawberry!

Looking a for a fun winter activity in Japan? Try picking your own strawberries fresh from the farm! There are all you can eat strawberry farms in prefectures all across Japan. Strawberry picking season usually starts in the beginning of January until May.

We hope this list has inspired you to try some of these sumptuous winter treats. If you are interested in working in the food or beverage industry, check out our latest food jobs in Japan.