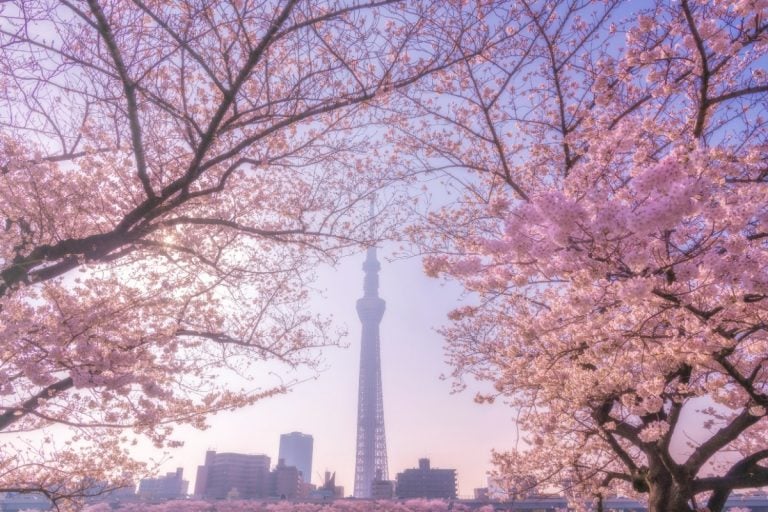 As much as I love to picnic beneath the cherry blossoms, this year’s spring will likely be a little different. With the state of emergency in Tokyo not yet lifted, and possibly going to be extended, it’s probably best to avoid the crowds that flock around the city’s top cherry blossom sites. But that doesn’t mean you can’t enjoy the blossoms. Here are seven of the least crowded sakura spots to see while social distancing. 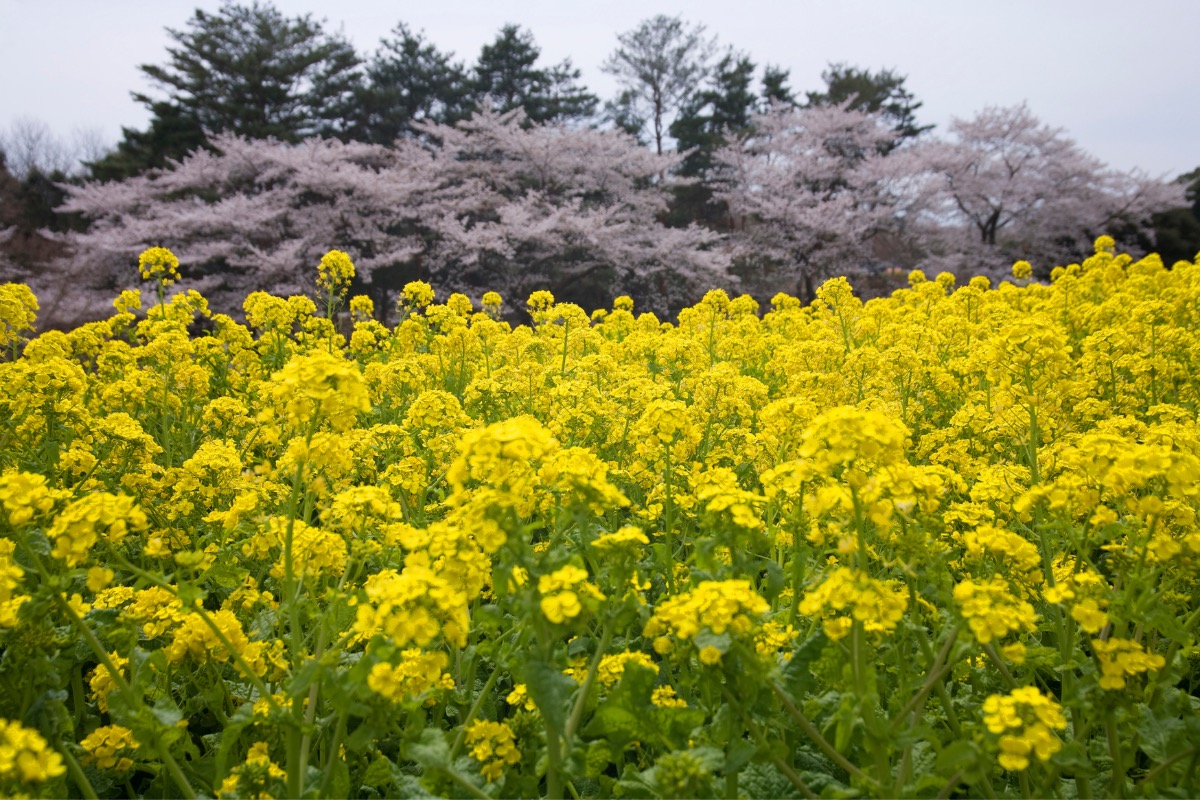 In spring this park comes alive, not just with sakura, but many other flowers, including tulips, hyacinths and poppies. The park’s best view of the cherry trees is a field where the trees are surrounded by yellow nanohana (canola) flowers. The park covers 180 hectares and has 1500 sakura trees, so it will be easy to socially distance while enjoying the flowers.

Hikarigaoka Park in Nerima is one of the largest parks in Tokyo, and also one of the best for seeing sakura, with around 1000 trees. Despite its size and large number of sakura trees, the park is farther from central Tokyo, so it doesn’t get as crowded during sakura season. If you want the feel of Yoyogi or Shinjuku Gyoen, but don’t want the crowds, then this park is for you. 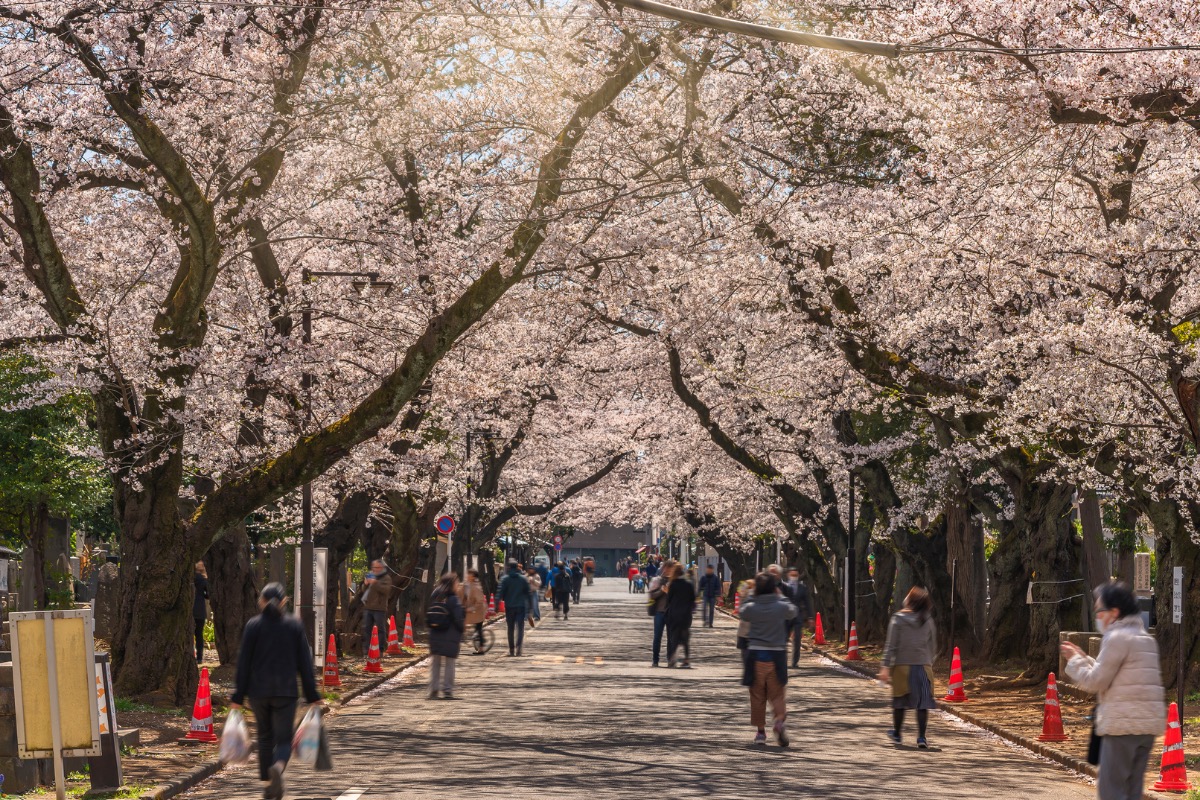 Cemeteries may not be your first thought when it comes to seeing cherry blossoms. However, Yanaka cemetery is well maintained, peaceful and has over 170 cherry trees. In fact, the cherry tree-lined main avenue is even called Sakura-dori. Stroll the streets accompanied by fluttering petals and the smell of incense. Then, if you’re hungry for a snack, you can stop by one of the area’s local coffee shops (like the cat-themed Nekoemon cafe). 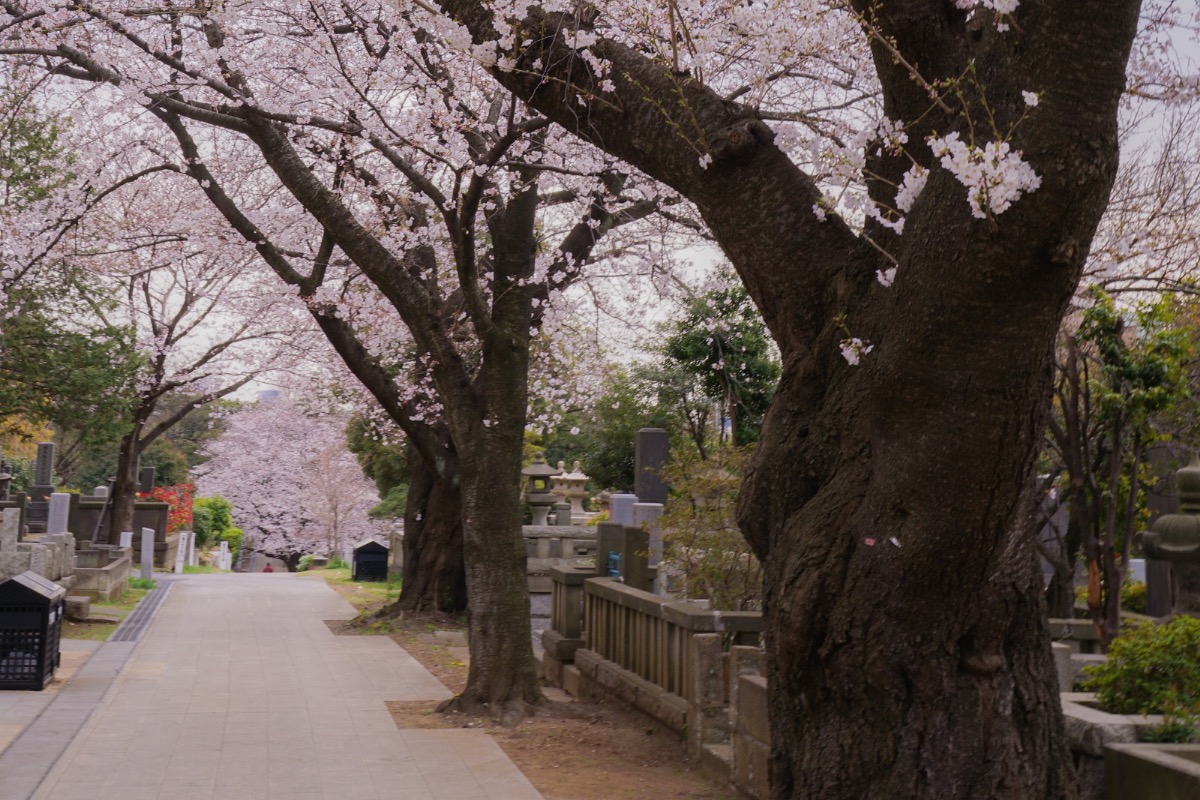 One of Tokyo’s oldest cemeteries, Aoyama is filled with over 230 sakura trees. In full bloom, white sakura create cloud-like arches over the avenues. The cemetery is also home to the graves of famous samurai like Okubo Toshimichi, and is the resting place of the famous dog Hachiko, who is buried together with his master, Professor Ueno. Meguro river may be the most famous cherry-tree lined waterway, but there are plenty of others around Tokyo. The Zenpukuji River has over 700 cherry trees lining its banks, with branches that arch gracefully over the water. The river itself has some of the cleanest river-water in Tokyo. 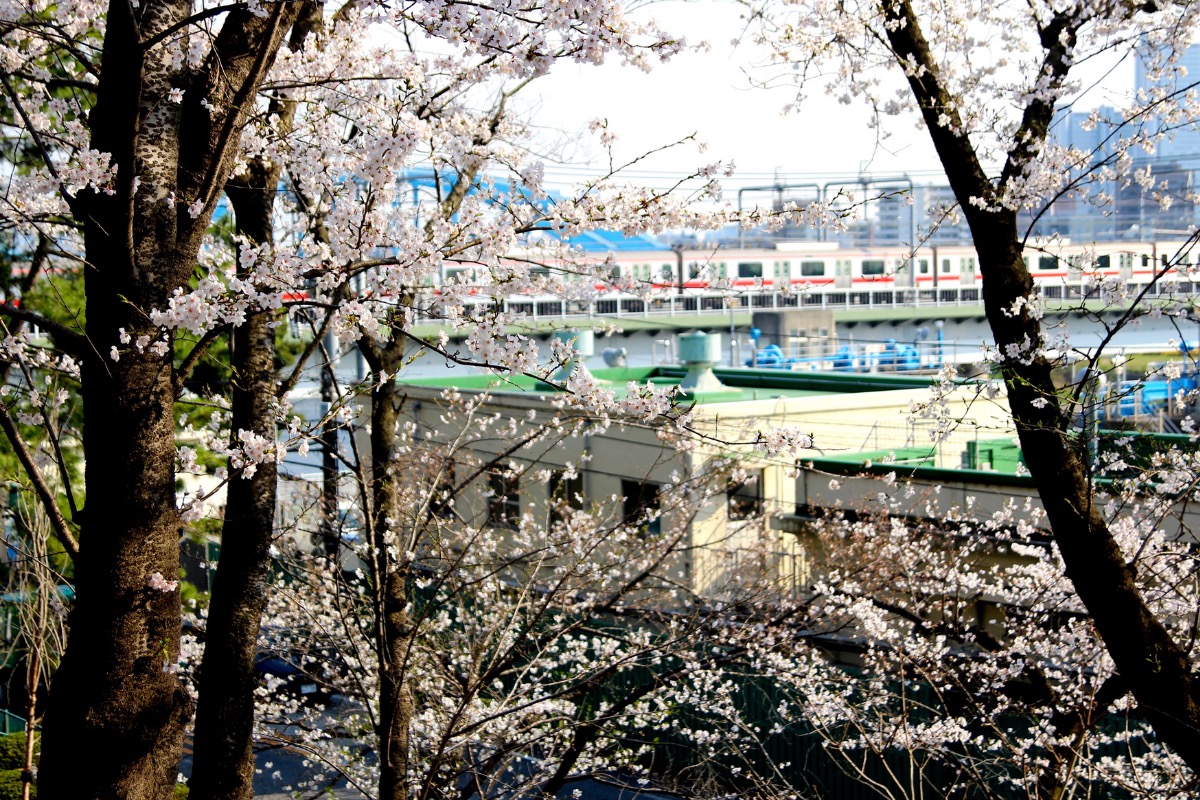 The Tama River has 2.5 km of cherry trees running along its banks in Fussa city and continuing on into the neighbouring Hamura City. The riverbanks also boast broad expanses of grassy fields, where locals go for walks and to play sports. The grassy riverbanks are perfect for picnicking next to the water, while you watch the sakura sway in the breeze. This stretch of riverside is about a 45 minute train ride from Tokyo, but it’s well worth the trek. When I came here myself last year during sakura season, I found the area to be far less crowded than most places in Tokyo proper. Here, cherry trees arch over steep riverbanks, while the water runs pink with petals. The area is worth visiting for more than it’s sakura though. It is also home to the town of Kawagoe. The town, which is also known as ‘little Edo’, is filled with old-style buildings, dating back to the Edo era, through to the Meiji and Taisho eras. Exploring Kawagoe feels as though you’ve stepped back in time. Once you’ve had your fill of walking, stop by the town’s famous starbucks (designed to look like a traditional Japanese building) for a sakura frappuccino.

The 39 hectare Kinuta park has around 800 cherry trees, and is located in Setagaya, a little ways out from the city center. The main draw is its large field dotted with cherry trees, perfect for a hanami (picnic). Despite it being a popular sakura spot with locals, in a park that large, you’re sure to find a socially distanced place to spread your blanket.

9. The Gotanda Section of Meguro River

Once you get past the throng of people around Naka-Meguro, the river’s crowds drop off steeply. On the stretch of river that runs from the Ohashi Junction of the Shuto Expressway on to Meguro station, and then further on towards Gotanda station, the cherry blossoms are usually only enjoyed by the locals. Having lived there myself, I can confirm that even in peak season, this part of the river remains uncrowded. While the sight may not be as iconic as the arch of trees over the narrow section up towards Naka-Meguro, it is still a lovely stroll. In some parts, the trees’ branches even arch over the paths on either side of the river. 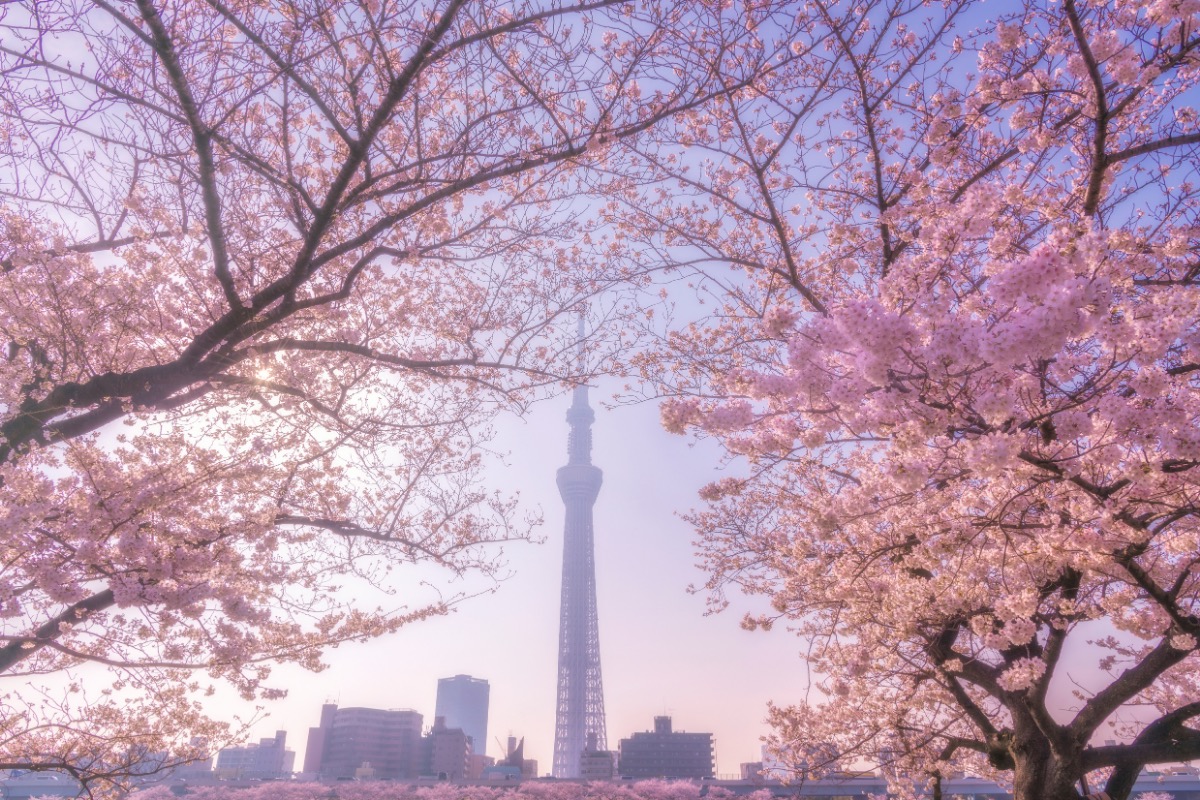 There are 640 sakura trees in the area, some lining the banks of the Sumida river, others immersed in the greenery of the park itself. The park is quite peaceful, as it is often overlooked in favor of its more famous neighbours, Sensoji temple and Tokyo Skytree. The best part about this park? The views of the Skytree framed by cherry blossoms.

This year the blossoms are predicted to hit their peak around March 23, much earlier than usual. Wear a mask, stay safe and have a wonderful hanami!