Getting a job in Japan that’s relevant to your interests without having JLPT N1 can sometimes seem like an impossible task. But Amelia Hiorns is living proof that you can do anything you put your mind to.

Without teaching a single eikaiwa (English conversation) class, Amelia was able to go straight from university in the UK to a bear conservation internship in Japan. She is now a Wildlife Research Assistant at Picchio Wildlife Research Center, specializing in bear conservation. She shared her story on how she got there, and what it’s like working in such a unique role. 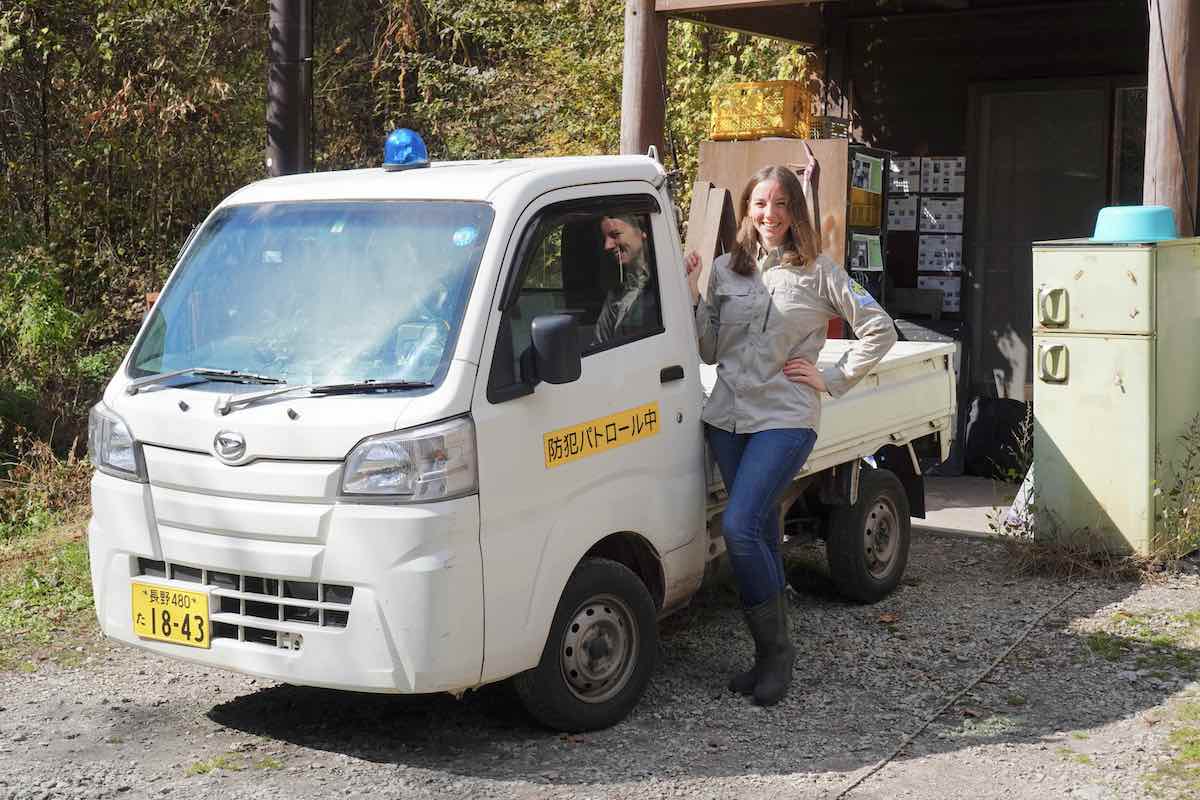 The Road to Picchio

Amelia’s original interest in Japan sparked when she was first introduced to Japanese pop culture, and after a visit to the country with her family, she knew straight away that she wanted to live here someday.

Amelia didn’t consider herself much of a linguist, and thought that could be a bump in the road on her way to Japan: “My background in zoology didn’t necessarily gear me up for finding a job in Japan where most foreigners start off with teaching or translation jobs.”

She was determined to find a way to get to Japan, so she kept searching for opportunities. Eventually she came across Picchio’s internship, and realized she had struck gold: “It felt like I had a chance to come to Japan and do something different.”

But to understand what Amelia does, we should first have an understanding of what Picchio itself does. Located in fashionable Karuizawa, Picchio is a wildlife conservation center and eco-tour operator. Through tours and experiences like their flying squirrel watching tours, their trained guides educate visitors on Japan’s flora and fauna.

A separate team of experts, which Amelia is a part of, work to protect the local Asiatic black bear population and reduce human-wildlife conflict.

Amelia originally started at Picchio with an internship in 2018. She instantly fell in love with the job and life in Japan, and told me: “I did six weeks interning with the bear team in 2018, asked for a job and here we are now.”

Now her role has grown to involve a variety of duties, from assisting with surveys and writing up scientific literature, to generating overseas interest in their nature tours and conservation efforts. She also supports the interns during the summer, so if you find yourself there you know you’ll be in good hands.

Of course, working with bears is not exactly a common job, so I was curious to hear how much time Amelia actually spent near or around bears, and what kind of work her team got up to on a daily basis.

To that, Amelia said: “During our busiest season, an average week at work can have me helping to process a captured bear and guiding interns through the proper sampling procedure one day, to conducting surveys on tree species or bear scat the next.”

Through this work, Amelia does get to see a fair number of bears. She sees them most often when they are tranquilized to be fitted with transmitter collars, but throughout the year on telemetry surveys she happily told me she gets to see them “doing what they do best – eating nuts and berries without a care in the world.” While it sounds very exciting to spot a wild bear roaming the woods, it’s a bit more problematic if they’ve found their way into the towns and built-up areas.

In much of Japan, it is said that bears are killed instead of being relocated or reintroduced. Amelia shed some light on this topic, saying: “In most towns and prefectures, if a bear is encountered in such a way that is considered “problematic” then they are in most cases captured and then killed. Occasionally they will be relocated.”

But this is not the case at Picchio. Here, bears are always relocated and released. What differs about their approach is how they handle these “problematic” bears: “a set of conditions is applied in each case. Decisions on how to handle the bear will be made depending mostly on how bad and how regular their “problem” behavior is.”

If the bear continues to exhibit the problematic behavior even after relocations and attempts at aversive conditioning, only then will the bear be put down. Amelia commented that “Bears are always given a second chance in Karuizawa.”

It’s for this reason that Picchio uses bear dogs. Bear dogs are a Finnish breed, (Karelian bear dog), that were bred in the USA as “wildlife conflict dogs”. This means that they can be used to control wildlife, like bears, in a method that is not lethal. At Picchio they each have their own handler who trains them, and they work together to chase, deter, and condition bears to stay away from humans and “problematic” behavior.

These bear dogs are the main way Picchio avoids killing bears, as they prevent the bears from coming into close contact with humans and populated areas, reducing human-wildlife conflict.

Amelia adds that the dogs are great ambassadors for their work because of their love of people, and that they teach younger generations that it is possible to coexist with bears.

If all this talk of bear dogs and wildlife conservation has got you interested, Amelia stresses the advantages of internships, saying “Once you have that foot in the door, you’ll be able to go as far as you want.”

However, even though Picchio’s internship program is very welcoming to English speakers with limited or no Japanese, Amelia mentions that her biggest limitation to progress is her lack of Japanese skills.

Since joining, her Japanese has improved in leaps and bounds, but she still feels far from “business level”, which makes things difficult in the field: “To make any real difference to conservation projects in Japan you have to really understand what everyone is talking about.” While solid writing skills in your own language can be valuable for spreading a message, if you don’t have a good understanding of what is happening in your own workplace, of course it can be hard to make progress.

That being said, Picchio is always on the look-out for passionate individuals with “a solid interest in conservation and communication skills”. So if you are looking to get into the field of conservation while working on your Japanese, Picchio might just be the perfect place to start!