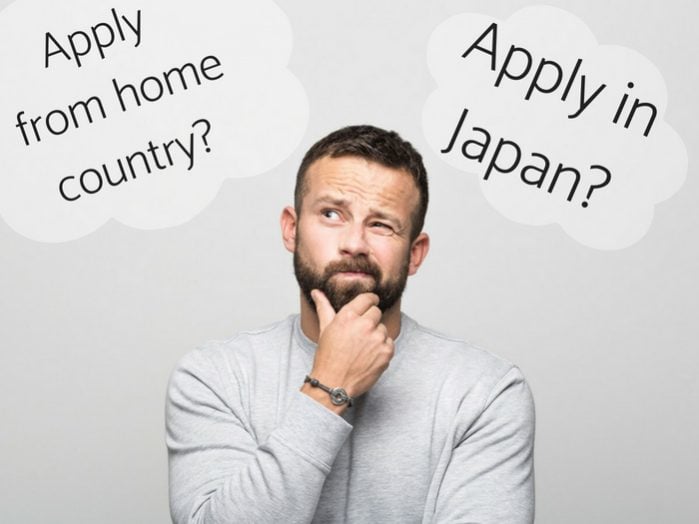 So, you’re itching to get your career started in Japan, but you’re having trouble deciding between two options:

While I have a distinct preference, both options have their merits. Let’s go through them before I declare my winner.

The main advantage of Option 1 is that it allows peace of mind and peace of wallet.

Since you don’t need to buy airfare until you have a gig (and visa), there’s no risk of wasting the money on a fruitless journey. You don’t run the risk of not having a valid visa after your tourist stint runs out. Also, since you don’t actually have a government-mandated time limit to your job hunt, you’re likely to be subject to less stress. You can apply for jobs as long as it takes and depart when you find something that’s good for you. Exactly how long it takes will be largely dependent on your resume, qualifications and interview skills, but even an extended job hunt will be OK since you will still be at home sweet home.

(Note: If getting a job in education is your goal, choose Option 1. No-brainer.)

Option 2 is a bit different. While its takes some money and guts to go to Japan jobless, it is definitely easier to land a job if you are already in the country. This makes sense.  Companies don’t want to waste money on flying over foreigners who will just end up jumping ship in a month or two, which happens more than often than you might think. The power of a good face-to-face interview can’t be understated. Giving an interview in Japanese is a hundred times more impressive than writing “Intermediate Japanese” on your resume.

The “go to Japan first” method also has a much higher ceiling than the first route.

For example, to get hired from abroad you are usually limiting yourself to the handful of big companies that need English teachers. However, if you have you your boots on the ground in Japan, the sky is the limit. If you network your ass off and go to as many industry meet-ups as you can during your limited time, there is virtually no end to the sorts of jobs you can find.

You also get to skip over the “teaching English” period that the vast majority of foreigners have to go through before finding their next step.

The second route will also require planning to be most effective. If you have no agenda other than “find a job” when you land in Tokyo, you will have a much tougher time than someone who has a calender filled with action steps to make their dream happen. To fill that schedule, you will need to contact as many possible employers as reasonable to ask for a coffee meet-up. Companies don’t have to be actively searching for a new employee for you to reach out to them either. Just frame it as “I’d like to learn more about your company” and try to get in contact with a real person and see if they might be available for a coffee meet-up sometime during your time in Japan. You will get turned down a lot, but if you ask around enough you should get a few “yes”s as well. If you do land a meeting, don’t just explain how awesome you are and how you are perfect for their company, instead just be genuinely interested and offer to help out if they ever need it. Maybe give a relevant example or two of how you have done similar things in the past. They might want to interview you further that very day, they might need something in 6 months, (they also might not want to speak with you further at all) but you will have made a contact that could bear fruit in the future. Nice!

So which do I think is best?

For most humans, I think Option 1 is the better play. You don’t have to buy an expensive plane ticket to do it, plus it doesn’t require as much face-to-face intense job hunting and networking finesse as the second method.  Sure, you might be stuck in an English teaching job that isn’t exactly what you want to do long-term, but it still gets your foot in the door of Japan. From there, it’s up to you where you go.

However, if you already have some Japanese skills, along with an outgoing personality and the money and stomach to take some risks, I’d venture to say that just getting to Japan first and seeing what you can find might be better for you. This method requires MUCH more legwork and courage, but it also has the chance to let you jump ahead a few spaces on the game of “Japan LIFE” (patent pending). You can skip right past the initial six months at an Eikaiwa if you land a job at a tech start-up right off the bat, for example. If you can show a marketing director how you can help his company on a napkin over a few ASAHI, then you don’t need to teach kindergarten kids the ABCs while you work on your networking game.

Unless you are an outgoing, intermediate level Japanese-speaking risk taker, I strongly recommend that you lock down a job first and then work your ass off to move up that ladder when you get to Japan.

If you ARE an outgoing, Japanese-speaking risk taker, then diving right in and putting yourself to the test might be just what you need. Good luck my friend.